The JRB presents an excerpt from What Is Africa to Me?, which tells the story of Condé’s early adult years in Africa—years formative not only for her, but also for African colonies appealing for their own independence. 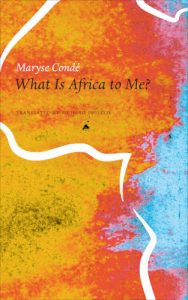 What Is Africa to Me? Fragments of a True-to-Life Autobiography
Maryse Condé (translated by Richard Philcox)
Seagull Books, 2016

Why is it that any attempt to write about one’s life ends up as a jumble of half-truths? Why does it have to be that any autobiography or memoir all too often becomes a construction of fantasies where the simple truth fades, then disappears altogether? Why is it that we are so anxious to depict a life so different from what we have lived? I read, for example in my publisher’s press release on the basis of information I provide for journalists and booksellers: ‘In 1958, she married Mamadou Condé, an actor from Guinea, whom she saw perform at the Odeon theater in Les Nègres, a play by Jean Genet, directed by Roger Blin, and left with him for Guinea, the only African country that said ‘No’ to General de Gaulle’s referendum.’

The above information conjures up an appealing picture of love enlightened by political commitment. And yet it is far from the truth. I never saw Condé perform in Les Nègres. While I was with him in Paris, he acted in small parts in obscure theatres where he played ‘the nigger’ as he used to joke. It was only in 1959 that he played Archibald at the Odeon, long after the first of our many separations, since our marriage had been far from a success story. I was teaching at Bingerville in the Ivory Coast where Sylvie-Anne, our first daughter, was born.

Paraphrasing Jean-Jacques Rousseau, therefore, in his Confessions, I declare today that ‘I propose to show my fellows a woman as nature made her and this woman shall be me.’

In a manner of fashion I have always felt passionate about the truth which, both in private and in public, has often been to my detriment. In my childhood memories, Tales from the Heart: True Stories from My Childhood, I recount how my ‘vocation as a writer’ (if we can use such an expression) came about. I must have been around ten. I think it was one 28th April, the birthday of my mother whom I adored but whose singular, complex and capricious character never failed to disconcert me. I had apparently devised a piece that was composed of a poem and a short play where I attempted to act out the various facets of her personality, sometimes tender and serene like a sea breeze, sometimes spiteful and moody. My mother is said to have listened to me without saying a word while I paraded in front of her dressed in a blue frock . Then she looked up at me, her eyes brimming with tears, to my amazement, and sighed: ‘so that’s how you see me?’ At that very moment I felt a surge of power that I have attempted to relive, book after book.

This anecdote fabricated a posteriori seems to me the perfect illustration of those unwitting (?) endeavours of embellishment that I am denouncing. no doubt I have often dreamt of shocking my readers by debunking certain impostures. more than once I have regretted that certain barbs in my texts have gone unnoticed. For instance, in my last novel En attendant la montée des eaux (2010), I wrote: ‘Isn’t a terrorist quite simply an outcast, someone excluded from his land, from wealth and happiness who desperately and perhaps barbarically endeavours to make himself heard?’

I had hoped that, in our overly chary times, such a definition would get some kind of reaction. But only Didier Jacob interviewing me for the Nouvel Observateur raised the question.

The desire to shock, however, is not enough to assume the vocation of a writer. I was swept up almost unwittingly by my passion for writing. I shall not compare it to a mysterious malady since it has given me enormous joy. I would rather compare it to a compulsion, somewhat scary, whose cause I have never been able to unravel. Let us not forget that I was born in an island at a time when there was no museum, no real theatre, where the only writers we came across were in our school textbooks and who originated elsewhere.

I did not become a writer at an early age, scribbling extraordinary texts at the age of sixteen. My first novel was published when I was forty-two, when other writers have begun to put away their pens and paper, and was received very badly, which I stoically believed to be a premonition of my future literary career. The main reason for writing so late was that I had until then been so occupied with the tribulations of life that I had no time for anything else. In fact, I began to write only when my life got less problematic and I was able to trade my real-life dramas for paper ones.

I have described in detail the background I came from in Tales from the Heart and especially in Victoire: My Mother’s Mother. Euzhan Palcy’s hit film Sugar Cane Alley popularised a certain image of the French Antilles. No, not all of us belong to the wretched of the earth, working ourselves to death amid the sting of the sugar cane. My parents belonged to the embryo of a middle class and called themselves, presumptuously, ‘Les Grands Nègres’. It must be said in their defence that their childhood had been terrible and so they wanted to protect their children at all costs. Jeanne Quidal, my mother, was the illegitimate daughter of an illiterate mulatto woman, Victoire, who couldn’t speak a word of French. Victoire hired her services out to a family of white Creoles, the Wachters, and very early on experienced her share of shame and humiliation. Auguste Boucolon, my father, was also an illegitimate child, orphaned when his poor mother was burnt alive as her shack went up in flames. Nevertheless, we can safely say that these painful circumstances had relatively positive results. The Wachters authorised my mother to benefit from their son’s private tutor; hence, ‘abnormally’ educated given her colour, she became one of her generation’s first black elementary-school teachers. My father, a ward of the local authorities, pursued his education, unusual for the time, with the help of scholarships and ended up founding a small local bank, the Caisse Coopérative de prêts, for government officials.

Once they were married, Jeanne and Auguste were the first black couple to own a car, a Citroën C4, to build a two-storey house in Pointe-à-Pitre and to spend their vacations in their ‘change of air’ house on the banks of the Sarcelles in Goyave. Steeped in self importance, they considered nothing good enough for them, and raised us, my seven brothers and sisters as well as me, in contempt and ignorance of the society around us. As the last of seven siblings, I was particularly spoilt. Everybody agreed that I would have an exceptional career, and I believed them. At the age of sixteen, when I left for university in Paris, I could not speak a word of Creole. Never having attended a lewoz dance, I had no knowledge of the traditional gwoka rhythms. For me, even the cuisine from the French Antilles was crude and unrefined.

In the pages that follow, I shall not talk about my present life, devoid of drama, except for illness and old age creeping up on me, which, I’m sure, will not interest anybody. I shall try, rather, to figure out the considerable role Africa has played in my life and imagination. What was I looking for? I still don’t know for sure. At the end of the day, I wonder whether the words of Marcel Proust’s hero in Swann in Love are not appropriate for my time in Africa: ‘to think that I ruined years of my life, that I wanted to die, and that the love of my life was for a woman who was neither to my taste nor to my liking.’

Read More
‘Often we know ourselves and other people…
October 15, 2021 No Comment