Constructed around a feminist, though dystopian, future, Nnedi Okorafor’s novel Who Fears Death—now reissued some eight years after its first publication—can with hindsight be named a seminal catalyst of African speculative fiction’s surging popularity. 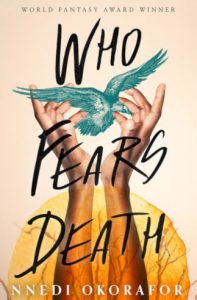 The narrative, which follows the mystical journey of a child of rape, or Ewu, named Onyesonwu (Onye for short), takes place in a post-apocalyptic world where both myth and technology have been mobilised in the service of exclusion and genocide. The story is fraught with tensions arising from all-too-familiar prejudices, including patriarchy and racism, both of which are inscribed upon an ancient manuscript called The Great Book, whose laws govern the social lives of the characters. Reading it in South Africa in 2018, where postcolonial and post-apartheid consciousness increasingly intersects with the radical reconstructions of identity and power happening across the world, three themes—two positive, one negative—strike me as standing out with particular force.

As evidenced by the author’s choice of a heroine who is a product of genocidal rape, the novel’s most striking commentary concerns the experiences of women and female children, and inasmuch as these characters are forced to contend with various manifestations of violence imposed upon them by the strictures of the material world they inhabit, this violence is nevertheless tempered by a profound mysticism grounded in something akin to magic. Herein lies the most intriguing aspect of Okorafor’s creation: the intersection of the protagonist’s resistance to the notion of ‘biology as destiny’ with the mystical potential signified by her gift as a shapeshifter.

From the novel’s outset, Onye is stubbornly committed to severing the conventions and constraints that society would bind her with, sealing her fate. The motif of fate in the novel is intimately bound up with sociopolitical directives that join destiny with ethnic and gendered identity. Onye’s resistance to these directives place her in the position of an outsider, even more so because she is a girl. Marked as a product of rape by her physical features, Onye is both feared and reviled by her community. Likewise, despite the formidable nature of her gift, the sorcerer who later becomes her tutor, Aro, initially refuses to teach her because she is female. Even the prophesy of a saviour who will one day rewrite The Great Book and alter the course of the future is misinterpreted, because it is misaligned with the prejudices of the time. Onye later learns from her second tutor, Sola, that she is, in fact, the fated saviour. The only biological descriptor that she ultimately answers to, in terms of her destiny, is ‘tall’:

Some Nuru Seer prophesised that a tall Nuru man who was a sorcerer would come and change things somehow, rewrite the book […] You must forgive us all our weaknesses, me, Aro, all of us old ones. We’ll learn from this. Aro refused you because you were an Ewu female. I almost did the same. This Seer, Rana, guards a precious document. This is why he was given the prophecy. He was told something and couldn’t accept it […] He wasn’t advised to look out for a Nuru man. It was an Ewu woman […] At least he was truthful about one thing, you are tall.

As evidenced by Sola’s confession, Onye’s journey to becoming the fated saviour disrupts not only society’s expectations regarding the place of Ewu children and women, but also the directives of the ancient manuscript. In placing emphasis on the processes of writing and interpretation, Okorafor’s novel presents us with a meta-textual puzzle of a fascinating sort, primarily because the characters’ reverence for the word as written by hand contradicts their shared regard for technology. The centrality of The Great Book in the maintenance of a distorted pseudo-theological order represents a patent critique of divisive religious zealotry and provokes questions about authorial prerogative and subjectivity. The questions posed by this manuscript are archly summarised by Aro’s comments on the uses of language: ‘Words, names, words, names,’ he says, ‘They don’t matter sometimes.’ This is quite a statement to put inside a book—quite a rebuke to the very idea of an author’s intentions.

The novel’s concern with authorship extends even further, linking the idea of textual preservation to colonial exploitation. As it immerses us in its magical world, filled with the unexpected, along with the creation myth that provides a background for the genocide perpetrated by the Nuru against the first peoples, the Okeke, we also come to learn about texts erased from history:

There is a portion of The Great Book that most versions exclude. The Lost Papers. Aro had a copy of them. The Lost Papers go into detail about how the Okeke, during their centuries festering in darkness, were mad scientists. The Lost Papers discuss how they invented the old technologies like computers, capture stations, and portables. They invented ways to duplicate themselves and keep themselves young until they died. They made food grow on dead land, they cured all diseases. In the darkness, the amazing Okeke brimmed with creativity.

The mysterious Lost Papers underline the novel’s concerns with authorship by gesturing towards that which is included in and excluded from the archive. This concern also forms part of the elaborate colonial conceit at the heart of Onye’s story: that is, the exploitation of the first peoples through violence. The Lost Papers present an idyllic world prior to the creation of the oppressors, a world of infinite possibility and creativity, all of which are forgotten or otherwise buried. Who wrote the Lost Papers? How are we to ‘read’ history properly without them?

3. Rape as a plot device: a violation, if not handled properly

Onye’s story is at once a documentation of her evolution from an outsider to a great sorcerer, a love story, and the tale of her literal journey through an unforgiving desert in search of The Great Book. The novel is fuelled by her desire to avenge her mother by killing her rapist father, who, as it turns out, is also a powerful sorcerer. While the second and third subsections of the novel are compelling, the first subsection, which deals with Onye’s childhood, unfortunately reproduces notions of African barbarity that go back to the dawn of history. In its depiction of genocidal rape and the ritual of female circumcision, the graphic and sometimes gratuitous descriptions of physical violence are inconsistent with the tone of a novel, which otherwise deals with difficult themes in a highly imaginative and sophisticated manner. Although integral to the outcast heroine’s character development, the narrative’s treatment of rape verges on a macabre form of the pornographic, as indicated by details of bodily fluids and the rapists’ relish in their violent actions. This type of representation raises questions about depictions of rape in fiction—of the tension between creative license and ethical engagements with difficult topics. The novel’s first section is not adequately self-conscious of this tension.

Despite my reservations about the first section, however, Who Fears Death is a tale of triumph, loss, love and revenge told, for the most part, in a magical and surprising way. Both as a signpost on the road to African speculative fiction’s rise and as a challenging, absorbing read, Okorafor’s is a book worth your time.