Kigali-based Huza Press has just released the English translation of Yolande Mukagasana’s Not My Time To Die, translated by Zoe Norridge. 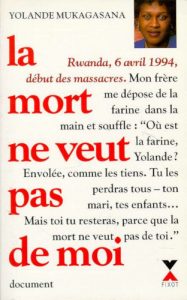 Mukagasana’s book was originally released in 1997 as La mort ne veut pas de moi, making it one of the first civilian testimonies of the Rwandan Genocide. Acclaimed by both Gaël Faye and Véronique Tadjo, the book is crucial to individuating a collective crime and understanding the climate in which such a horror could occur.

In the nineteen-nineties, Mukagasana is a successful nurse and mother of three, but while planning a party for her wedding anniversary a rupture in the tense political climate makes her a target. Marked as a Tutsi woman she is forced to flee for her life. Not My Time To Die charts her journey of guilt, familial betrayal and hope.

Huza Press are officially launching Not My Time To Die on Friday, 5 April 2019, as part of #Kwibuka25—kwibuka being the Kinyarwanda word for ‘remember’. The annual Kwibuka event commemorates the 1994 genocide as well as the journey of reconciliation and nation building Rwanda started and continues to engage in to this day.