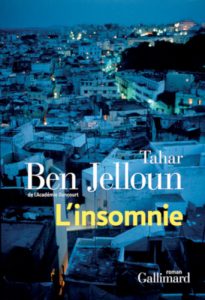 Celebrated Moroccan author Tahar Ben Jelloun has released his latest book, L’insomnie. The darkly humorous thriller is narrated by a scriptwriter in Tangier, a life-long insomniac who one day learns that murder is the secret to getting a good night’s sleep.

Desperate for slumber, he kills his mother first. As the effects of his deed wear off he realises he has to stick to his murderous ways to ensure another restful night. When one of his most notable victims turns out to be a former torturer who was active during the cruel reign of King Hassan II, and he gets a month of quality rest, he realises that justice is his bedfellow: the more evil his victim, the longer and better he sleeps.

As the murderous scriptwriter’s exploits become more daring and he targets more prominent individuals, however, everything threatens to come tumbling down.

His publisher, Gallimard, presents an interview with Ben Jelloun on his sleeping habits, his narrator’s relationship with his wife and more, here: