I find [Sarkozy’s] France monstrous. The fact that we have chosen to live in Berlin for two years is far from being unrelated to that. We left just after the elections, in a large part because of Sarkozy, even if I am very aware that saying that can seem snobbish. I find that atmosphere of vulgarity and heavy policing detestable. 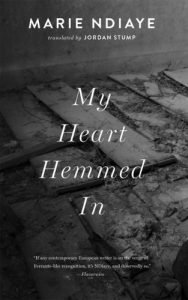 True horror is the unknown. Wince-smiling because you’re not in on the joke. Class anxiety, unnameable ills, the lack of a diagnosis. Fear with a capital F is the concern of Marie NDiaye’s spooky nightmare of a novel, My Heart Hemmed In, which is so finely and acutely written it is a travesty that it has taken ten years for an English translation. 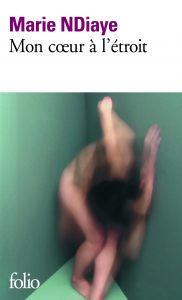 My Heart Hemmed In is a novel about racism which never once mentions the word. But that is characteristic of the subtlety that makes NDiaye such a clever and beloved writer (she’s the only living female playwright included in the Comédie-Française). No garden-variety racist calls themselves a racist, after all. They just say, like the local pharmacist to the main character, recently-ostracised Nadia:

So you think, but, oh God you don’t understand and I don’t know how to … You’re so different, so profoundly … excessive, but either you don’t know it or, who knows, you refuse to see it, although, once again, this isn’t exactly about you as such, and … and the disgust and hostility you inspire in some people, not me, oh not me, is something you can’t feel towards yourselves, yet, and …

The whole of My Heart Hemmed In is needled with micro-aggressions that keep Nadia questioning whether events are really happening or not. Every interaction she has with other people is littered with ellipses and malevolent innuendo, and NDiaye’s fog of prejudice creates a fusion between literary fiction, absurdism and psychological thriller. The action takes place in a bizarre world—Bordeaux in the Upside Down of The Duffer Brothers’s Stranger Things—where formerly popular primary school teachers Nadia and Ange Lacordeyre suddenly realise they are quietly hated by everyone. The escalation is swift. Their whole community, even their young pupils, seem to be converted overnight; the feeling is similar to waking up on Brexit morning or to the Trump election results. It is disorienting—the French say it better: bouleversant. Nadia perfectly expresses the contradiction all slighted people feel:

We are convinced of our innocence but ashamed all the same.

One day, walking home, Ange is surreptitiously attacked and a mysterious life-threatening wound ravages his stomach. He is bedridden, and, either feeling beholden to his fate or certain of the injustice he would face in any health system he could seek help from, he refuses to see a doctor. It’s the second marriage for both Nadia and Ange and hitherto they have been a happy couple, valued by their community. Now their former intimacy is torn by a physical and ideological divide over what to do. Ange will do nothing, but Nadia is compelled to do something, and her journey to figure out what is what drives the novel. Essentially her dilemma is: how do you fight a ghost? The wound, the relationship between Nadia and Ange, and the relationship between the two of them and their community develop in the same way—they fester, they suppurate, they weep.

Enter the intrusive neighbour, Monsieur Richard Victor Noget. The only person who will associate with Nadia and Ange in their fallen state, he claims to come as a friend. Noget is a lauded educationist whose solution to their problem is to stuff the couple full of delicious gourmet Bordelais cuisine. Yet, in a vindictive manner, he also forces them to gorge on the warped image society has of them:

You two, it must be said, have … an inappropriate attitude towards life—unacceptable, from certain points of view, and I would even add, forgive me, obscene …

He won’t even let Ange heal:

‘No you see, you mustn’t try to treat him,’ he says agitated. ‘He can’t be allowed to forget what they did to him!’

The victim must always be forced to remember, while the perpetrators, eyes turned away, can move on. This injustice is what Kenyan feminist activist Shailja Patel expands upon when she says, ‘When you want to understand how power works in any society, watch who is carrying the shame and who is shaming’. Ange becomes more phlegmatic as his wound widens and deepens and his sick room grows danker and he greys. ‘I have to meditate on my wound and the multiple meanings of suffering’, he remarks, buying into the shame.

France has always promoted itself as One France, but the fissures in liberté, fraternité, egalité regularly appear. Be it Marine Le Pen’s resurgent support base, propelling her to the second round of voting in the 2017 national elections, or the 2005 riots against racial profiling and the disparity in living conditions between the banlieue of Clichy-sous-Bois and metropolitan Paris, or, most recently—and of particular horror—the attack, in February this year, during a random stop-and-frisk, of a young black man known only as Theo L, by a group of policemen, in which he was sodomised with a baton so violently he was left with permanent intestinal damage (the French police described this as ‘an incident’)—something is rotten in la République française.

Charles de Gaulle famously said, ‘How can you govern a country which has two hundred and forty-six varieties of cheese?’ In this case, Monsieur le Président, you don’t bother. You have the community police people instead: thus, trams refuse to stop for Nadia, she is spat on, and it appears she has been silently fired from her job. As Ange’s health declines and Nadia keeps thinking ‘there goes my life, there goes the neighbourhood’, she looks back at her past—what and whom she left behind in order to become materially successful, upwardly mobile. Is it worth it, she wonders? Is she as secure in Bordeaux’s elite class as she thought?

‘Today I’m a respectable middle-class woman, always carefully dressed, coiffed, and made-up, and my speech is fast and high-pitched, with the briefest of pauses between sentences. But to Ange, I know, I’m not fooling anyone …’

Nadia vacillates between knowing and unknowing. She knows her heart and her city, but, like walking through your old childhood neighbourhood once it has become gentrified, the sudden marginalisation renders both strange to her.

‘And my heart is cornered, surrounded by the baying pack, and it’s hammering on the wall of my chest, wishing it could break out of its cramped cage, my poor aging heart, my poor trembling heart.’

In beautiful prose and with searing honesty, NDiaye has painted an insecure woman, sucked into dis-ease and searching herself and a closed society for answers, while mired in a culture of denial and subterfuge. The secretiveness of Nadia’s relatives and the queer nature of how the plot unfolds create a palpable anxiety that propels us—masterfully, and in a way that will resonate with any outsider—to the end.