The JRB presents an extract from Like Family: Domestic Workers in South African History and Literature, by Ena Jansen. 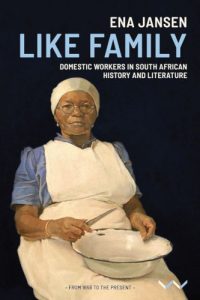 In the excerpt, taken from the chapter ‘Domestic Workers in Personal Accounts’, Jansen recounts Es’kia Mphahlele’s memories of growing up with a mother who was a domestic worker, mainly taken from his memoir Down Second Avenue (1959), one of the earliest autobiographies by a black South African.

Down Second Avenue (1959) by Ezekiel Mphahlele (1919–2008) is one of the earliest autobiographies by a black South African. Were it not for the fact that his mother, grandmother and an aunt worked for white people in Pretoria, he would probably never have met a white person as a young boy. Black and white children did not go to school together and usually lived in neighbourhoods far apart. Even though their parents might be city dwellers, most black children were sent ‘home’ to live with family in rural areas. The Urban Areas Act of 1923 had far-reaching consequences for black families, as Mphahlele suggests in the opening paragraph of his autobiography:

I have never known why we—my brother, sister and I—were taken to the country when I was five. We went to live with our grandmother—paternal grandmother. My father and mother remained in Pretoria where they both worked, my father a shop messenger in an outfitter’s firm; Mother as a domestic servant. It was in the autumn of 1924.

Other wide-ranging regulations concerning land, labour and urban living were already in place. For years the Mphahlele children had to live with their grandmother in the village of Maupaneng outside today’s Polokwane. The young Ezekiel noticed that the village was mainly populated with old men and middle-aged and elderly women. ‘I understood that Pretoria was the Mecca,’ he observes. Because their mother earned money as a domestic worker in the city, she was able to see to the material needs of her children, even though she was not there to take care of them. However, eight years after she had taken them to live with her husband’s family in Maupaneng, she defied the rules and went to fetch them. Ezekiel remembers a cold winter’s day when she scrubbed and dressed them in clean clothes before taking them with her to live in Marabastad, a black township near the Pretoria city centre.

This ‘Mecca’ turned out to be an inhospitable place where their father spent most of his money on skokiaan, a liquor brewed from yeast, sugar and water, while their mother did her best to raise her children in difficult circumstances. In the end, after many incidents of domestic violence, Ezekiel’s father abandoned the family and he and his siblings went to live with their maternal grandmother who also had a house in Marabastad. A domestic worker who was taught cooking skills by ‘Boers’, his grandmother never tired of talking about the cruelties she suffered during the time of President Paul Kruger in the 1890s. She refused to drink from the mug her employer gave her, and when she went to work she took her own cup and saucer, a small teapot, some tea leaves and sugar.

Ezekiel’s childhood is dominated by poverty, violence and the presence of police, and these and other memories such as his rat-infested home are balanced by the small joys of going to Buster Keaton and Charlie Chaplin movies and lively township music. The black neighbourhood was a world unto itself, and its residents could not imagine that white people would ever want to come there.

Ezekiel’s mother worked as a ‘live-in’ servant. She had one half day off every two weeks, when she saw her children; Ezekiel recalls Sunday afternoons: ‘Visiting domestic workers from the suburbs passed our house before they swept into the location, and passed in front of our house again on their way out’. Ezekiel’s link to white people was the laundry work done by his grandmother and Aunt Dora:

On Monday mornings, at about four o’clock, I started off for the suburbs to fetch washing for Aunt Dora. Thursday and Friday afternoons I had to take back the washing. If I was lucky enough I borrowed a bicycle from a tenant of ours we called ‘Oompie’—uncle—when he was not using it on his rounds in the location collecting numbers from gamblers for the Chinaman’s fah fee.

When the bicycle was not available, young Ezekiel had to carry the bundles on his head, walking seven miles to the suburb of Waterkloof. ‘How vividly I remember some of the whites’, he would later write. Among them was an ‘Afrikaner with a heavy bosom’: ‘“Boy,” she often said at the end of the month, “tell your mother I’ll pay her tomorrow.” That meant any number of days after pay day. We always referred to Mrs Reynecke as môre kom—come tomorrow.’ One such family knew that Ezekiel was a passionate reader and gave him their old newspapers and magazines. However, they were not at all interested in asking him why he liked reading: ‘I thought naively that if they were superior to me and my kind they should show some interest in a less fortunate creature who wanted to acquire something like the degree of literacy they enjoyed.’ Lack of interest—or worse—was the norm:

Some of the English families my mother worked for from time to time were patronising towards me. Others resisted me. She worked for a Dr Broderick once. His children often came to me or called, ‘John, you want Eva?’ Eva was my mother, John was not my name. Or, ‘Eva, here’s your son.’ Then they looked me up and down, faces screwed up, eyes squinted. Sometimes they tossed me an orange, I never got used to being examined like that. I resented it but at the same time feared that any moment the children might decide to tell their parents that I was undesirable. Apparently they didn’t. But after a time I just went straight to lean against the side wall of my mother’s little room and waited until she should come out of the big house.

Ezekiel also encountered Afrikaans families, and he comments on their behaviour towards him thus:

The Afrikaans people for whom Aunt Dora washed made no bones about the fact that they didn’t want me to get into their kitchen. Their children merely peeped through a window. Otherwise I didn’t seem to exist. It felt easier that way. If a child wanted to let the mother know I was about, it said, ‘Ma, die wasgoedkaffir is hier—Mummy, the washing Kaffir has come.’ And the child took no more notice of me.

Mphahlele vividly remembers his feelings of impotence, and being the despised object of the white children’s gaze. White children reacted to his presence with aloofness and disdain, and ‘looked me up and down’, ‘faces screwed up’, ‘eyes squinted’, ‘examined’, ‘peeped’ and ‘took no more notice’ are telling images. The backyard is a space of trauma, one in which white children treat a black child as if he is some kind of animal, or a mere thing, ignoring him as though he does not exist. Mphahlele does his best to escape from this objectification by going to stand out of sight around a corner. Throughout Down Second Avenue, he records encounters with white people, often without further comment. As he observes, ‘I came to learn the hard way that one had to keep out of the white man’s way.’

In 1935, after Ezekiel obtains a first class pass in Standard 6, his mother at great personal sacrifice sends him to St Peters High School in Rosettenville, Johannesburg. Her earnings at the time were £3 per month; the annual school fees were £15, but still she managed, trusting that one day Ezekiel would take care of the schooling of his two younger siblings. The humiliation and hardship that the women in his family endured made Ezekiel realise that there was a direct connection between the power of whites and the subjugation of black people. His mother died at the age of 45 as a result of a diabetic coma. After qualifying as a teacher, Mphahlele studied at Unisa, went into exile and obtained his doctorate at the University of Denver in the USA. He then worked as an academic in many countries, including Ghana, France and the USA before returning to South Africa in 1977. He was appointed professor of African literature at the University of the Witwatersrand, and was by this time known as Es’kia Mphahlele. An important part of his legacy is the Es’kia Institute, based on education principles he supported, which was formed in Johannesburg in 2002.

Drawing on an extraordinary range of sources, Like Family provides rich insights into the ‘contact zone’ of domestic service that paradoxically involves both intimacy and distance. Jansen deepens our understanding of how the institution both reflects and reproduces the savage inequalities on which our society continues to be based.
—Jacklyn Cock, Professor Emeritus, Department of Sociology, Wits University and author of Maids and Madams: A Study in the Politics of Exploitation

More than a million black South African women are domestic workers. These nannies, housekeepers and chars continue to occupy a central place in in post-apartheid society. But it is an ambivalent position. Precariously situated between urban and rural areas, rich and poor, white and black, these women are at once intimately connected and at a distant remove from the families they serve. ‘Like family’ they may be, but they and their employers know they can never be real family.

Ena Jansen shows that domestic worker relations in South Africa were shaped by the institution of slavery at the Cape. This established social hierarchies and patterns of behaviour and interaction that persist to the present day, and are still evident in the predicament of the black female domestic worker.

Read More
‘What did it mean to suffocate history…
July 14, 2022 No Comment