In 2016, the late Binyavanga Wainaina contributed a piece of writing to a United Kingdom-based art project titled Inside: Artists and Writers in Reading Prison.

The piece, which was published in a book of the same name as the exhibition, is one of Wainaina’s last pieces of published writing.

Reading Prison in England is best known for being the place where writer, playwright and poet Oscar Wilde was incarcerated, from 1895 to 1897, for ‘acts of gross indecency with other male persons’. Wilde’s time in prison was harrowing, but while he was in solitary confinement he wrote the poignant and powerful De Profundis, an extended letter to his lover ‘Bosie’, Lord Alfred Douglas. Wilde died destitute in Paris, at the age of forty-six, three years after being released from prison. 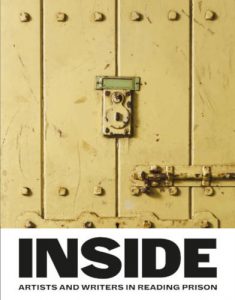 Through the Inside exhibition, Artangel, a London-based arts organisation, opened Reading Prison to the public for the first time, with a display of work by artists such as Nan Goldin, Marlene Dumas, Steve McQueen, writers including Binyavanga Wainaina, Jeanette Winterson and Anne Carson (and including a written text by artist Ai Weiwei), and performances by readers including Patti Smith, Colm Tóibín and Ben Whishaw.

This exhibition brings together that which Wilde’s final works so eloquently delineated: the pain of separation, the excruciatingly slow passage of time, betrayal, redemption, and love.

Inside won the Visual Arts Award at the 2017 South Bank Sky Arts Awards.

It has been 15 years since you died. Baba died 5 years ago now. It was worse, his death. Than yours. It was so sudden. I feel that we thought he was going to live for a long long time. He wasn’t even sick. I am ready for anything now. I haven’t been well. I have had two strokes. And they are not quite sure what causes them. I gave up smoking last October. I am in Berlin for a year. You died before I got famous, I still hurt because I was a failure when u died. Ill be honest and say I am a coward. I just cant imagine it with you. I can imagine telling Baba that I am gay. With. I almost did. But he died. Chiqy has a lot to do with it, living openly with Wanja the way she does. It gave me courage. Mum, I am in love. I have been in love for 5 years now. He is a soldier. He fixes tanks, and trucks in the army. We broke up, 3 years ago. He hurt me very badly. I guess I was heartbroken when I came out to the world. That was a factor, plus baba dying on us so suddenly. I knew I had time—you see. Time to tell him, properly. But you know me. I like to make u happy. You know, those days I was in South Africa, one day I got a phone call from baba. He had rerouted from Australia, on pyrethrum board business, to Johannesburg, I don’t know where he got my telephone number. He called the youth hostel I was in. I am sure you told him to call. I had not been in touch with you for many months. I did not know what to say. I was busy failing mum. Anyway, he told me something I never forgot. He said, ‘You do not live your life for us, we have done our bit. Your life is your own. Your mother misses you. Don’t let guilt that we will be disappointed in you affect you.’

Anyway mum, meet John, I have changed his name because nobody can know we are in love. You know it is not legal in Kenya. To be honest, if you were alive today, maybe we would be living together, married even, in South Africa. You see, this is the plan. We are working for it both of us. He is in Somalia now. I do not know where to begin with this. We Kenya, are in Somalia because of Al-Shabaab, who are terrorists, who killed many hundreds of Kenyans at Westgate and in Garissa University, last year. Mum, he is so handsome. He loved me first, long before I loved him. I gave him much trouble. After my first strokes 5 years ago, they did a brain angioplasty on me. On the plane home, I realised I almost died, I sent him a text saying ‘I’m in your hands now’. He did not let me down mum. His heart is so big. I love him because he believes that all 10 of his siblings are his responsibility. He takes care of them and me. I love him because when I got home, after the strokes, he is the only one who could calm me down, I developed a fear of crowds. Ultimately, we had to break up because of his parents. They won. I was heartbroken. So, to earn more money, he joined UN Troops at Amisom. Oh mum, Somalia is so dangerous. 180 Kenyan troops were killed by Al-Shabaab in January this year. It was horrible. John had trained with many of them. Al-Shabaab broke into the camp by ramming a 4×4 truck at the gate and breaking in. There were so many bodies. Anyway, I asked him if he still loved me. He said yes. I flew to dar es salaam to meet him for 5 blissful days. He was on leave. He is back in Somalia. I don’t see him until December. We talk every day on the phone.

PS. Everybody calls me Binyavanga these days.