‘The heart disavows borders and pays no heed to distance.’
—Rania Mamoun 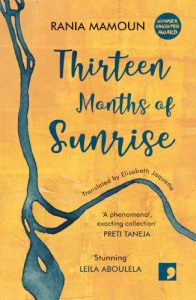 For a reader solely of English and French, certain cultures are harder to access, in part owing to their relegation to the periphery. Dominant languages and literary traditions (*cough* America) jostle in the centre and give the fallacious impression that nothing literary is happening or can happen anywhere else. As iconic Sudanese artist Ibrahim el-Salahi says of Africans in the art world, in the documentary Who Are You Calling an African Artist?, ‘We are kept in the dark, we are kept outside in the cold.’ One canon wrongly becomes the template, the rubric and the lens for viewing everything outside, giving a distorted view of all literature. It’s a perspective riddled with blind spots.

And then, when it comes to ‘African writers’ (who are you calling an African writer?), when deciding what to read next—in this case for my Temporary Sojourner series for The JRB—there is also the question of whether to go local or into the diaspora.

We children of the diaspora, we third (fourth, and even fifth) generation kids can write quite flippantly, with rose-tinted contact lenses, about our ‘home’ countries. Some squint back at the motherland or fatherland, carefully packaged in a series of two-week or two-month holidays, or never experienced first-hand at all, then jot it all down, decontextualised and without proper discernment. Others, leaning on their diplomatic passports to support their paper and pen, come out with near-Orientalist, parodically reductive lines like ‘my father’s tears of spiced mango juice’, ‘the harmattan’s rough, mistress-like kiss’, or ‘a girl as nubile as a sprouting yam tendril’.

But going local can be hard going, too. For one, language accessibility is often an issue. Sudanese literature, as Jamal Mahjoub writes, is mostly in Arabic, ‘and so, to many readers, the country remains an enigma.’ But, until 2011, Sudan was the largest country by land area in Africa. I was looking for a way to crack it when Thirteen Months of Sunrise by Rania Mamoun came along, translated by Elisabeth Jaquette, along with a fabulous literary playlist of music mentioned in or inspired by the book, curated by ArabLit.

Mamoun has published two novels in Arabic, Flash al-Akhdar (Green Flash, 2006) and Ibn Al-Shams (Son of the Sun, 2013). Thirteen Months of Sunrise is her debut short story collection, and the first of her books to be translated into English. She lives in Sudan, where she works as an activist and journalist.

In Thirteen Months, Mamoun brings a Didion-like journalistic eye to cities and the families and individuals who, often in deep and quiet crisis, inhabit them. The collection comprises ten stories, each quite short, and overall has a calming evenness of tone and clarity that makes the reader feel like an ordinary witness as opposed to a tourist in these lives. In ‘Cities and Other Cities’ we are on a boisterous bus journey with a woman nervous about finding herself lonely at her final destination, Khartoum—but her deeper thoughts are disrupted by her fellow passengers. In ‘Passing’ we are part of Eid festivities, and a conflicted daughter’s remembrances of her father:

I remember how happy you were when we moved to the house next to the mosque, where the call to prayer was so loud it beat in our hearts and shook our bodies, and you said, ‘Nothing makes me happier than being near a mosque, could we wish for a better neighbour?’

The documentary style of ‘In the Muck of the Soul’, peppered with camera angles and direction, is something of a departure in the collection. A woman’s son needs a kidney transplant and she is on her way to the charity office, far away, to apply for funds to pay for the procedure. When she reaches her destination, she is told they only deal with the paperwork for serious conditions on certain days. She is bereft and we leave her reckoning with bureaucracy as the main obstacle to health—and life. The story is thematically reminiscent of Egyptian author Ahmed Bouanani’s The Hospital (1989); both facilities are subject to their own absurd logic and justice, completely different from the rules of the outside world.

‘Stray Steps’, the most fantastical offering, closes the collection. A starving woman on the brink of a hypoglycaemic coma searches for food, which is all around her but evades her. She sees:

These round tan pieces of bread look like paintings, with their random progressions of colour because the heat isn’t even: from white, to brown, to beige, all the way to black where they’re burnt in different places.

The woman crawls to what she believes is her death, but a band of dogs, one which recognises her as a neighbour, begin to feed her and talk to her. As she becomes part of their pack her transformation from marginalised human to animal is complete.

Thirteen Months of Sunrise is concerned with themes of poverty, love, alienation and life’s frustrations. Mamoun’s writing is very careful, rarely openly critical of social structures or the government whose policies shape her characters’s very existence. Perhaps hers is a care that becomes second nature when living under the threat of government censorship, intimidation and the limits on press freedom that exist in Sudan. If so, it’s a completely understandable creative move, but at times it threatens to leave the stories lingering on the surface, where it seems they could delve deeper.

Read More
‘You can have all the cathedrals’—Raven Leilani…
February 18, 2021 1 Comment

Read More
[Temporary Sojourner] The Beast in the Village—Efemia…
August 27, 2020 No Comment