I believe that the best measure of whether we care about something is how quick and how natural our instinct to protect that thing is. And when it comes to the entire continent of Africa, my visceral sense of protectiveness is high. […]

History is invented for us. It’s time for us to reclaim it. I went to a very good school in Nigeria but I knew very little about Nigerian history. I knew a lot more about the kings and queens of England.
—Chimamanda Ngozi Adichie, 2018 Nelson Mandela Tribute Keynote Address

Take up the White Man’s burden
Send forth the best ye breed
Go bind your sons to exile
To serve your captives’ need
—Rudyard Kipling, ‘The White Man’s Burden’

I was seated on the floor at the very front of the Eyethu Lifestyle Centre in Mofolo, Soweto, where acclaimed fiction writer and feminist commentator Chimamanda Ngozi Adichie was about to be in conversation with feminist scholar and academic Professor Pumla Dineo Gqola. Behind me was the young novelist Ijangolet Ogwang, whose debut novel An Image in a Mirror was published last year. We began to talk about the publishing industry as we waited for Adichie to arrive—she was delayed for almost an hour, and no one was willing to leave the venue in case they lost their seat—and to take our minds off the heat. The electricity had been cut in the packed room, and with it had gone the air conditioning.

Ijangolet asked me what I think it takes to become a woman fiction writer of Adichie’s considerable reach and status. I proffered that, other than writing good books, being a cultural commentator—a person whose profession it is to inform and shape public opinion—has become one way to access such audiences, especially for black women. In agreement, she termed this the ‘nurturer’ or ‘great mother’ effect, which rewards black women for a certain type of Gaia femininity, one which promises a lens focused by ‘untapped’ knowledges and perspectives from the Global South, or black diaspora, and from which answers to pressing problems are provided. In essence, it presents an alternative way of caring, about books and a life of words, as the centre reels back from its self-perceived sterility.

In the midst of this conversation, the legendary Mam’ Gcina Mhlophe stepped up to the stage to divert the Abantu Book Festival crowd with a rousing call and response routine, pledging support for the event against its doubters and detractors. When, after that, Adichie still hadn’t appeared, the host for the session, novelist and essayist Panashe Chigumadzi, organised an impromptu literary open mic for new writers in the audience. An excited participant by the name of Tendani Hlongwane told the audience about her book, Being Black and a Woman—And Everything That Comes With It, which she distributes by email. She also shared that she was a survivor of the so-called ‘Quantum rapes’ that rocked the country last year, a form of domestic terrorism that has since fallen off the radar.

Adichie arrived soon after this sobering interlude, smiling to a cheering crowd and waving, wearing an ensemble reminiscent of royalty, her natural hair coiffed elegantly.

Not long into the discussion, the conversation pivoted to feminism as a worldview, and to what Prof Gqola describes as ‘the accusation of newness’ that is perpetually levelled at African feminists—as though feminism was a recent arrival to the continent. Adichie consolidated this by saying that in her own life feminism is rooted in her headstrong great-grandmother; that feminist theory is of no use to her; and that it is the story and texture of lives that matters. She added that Michelle Obama and Hillary Clinton, with whom she recently—controversially in some circles—shared platforms, are women she admires, and that to critique them is to (wrongly) hold them accountable for what their husbands have done. In a session that was preceded by the recollection of the normality of gender-based violence in the creative lives of South African women, and which began with Adichie confessing that there was opposition from some quarters to her coming to Abantu, owing to accusations of the festival being ‘racist’ and ‘exclusionary’—all while sitting in a venue plagued by what South Africans politely refer to as loadshedding—the atmosphere was loaded with meaning.

The instinct to protect Africa recalls Rudyard Kipling’s ode to empire, ‘The White Man’s Burden’, which valorises what are known as the three Cs of colonialism: Civilisation, Christianity and Commerce. Civilisation, in turn, came with its own claim: ‘reason is Greek’ and ’emotion is African’, a means of characterising Africans as being incapable of rational thought. The African response, over the last half-century and more, has been to reclaim indigenous knowledge systems, especially those deemed precolonial. Writers, scholars, postcolonial leaders, African nationalists and traditionalists alike, all have been involved in the project. Negritude, or the ‘self-affirmation of black peoples, or the affirmation of the values of civilisation of something defined as “the black world”’, as described by Souleymane Bachir Diagne, is an example of this.

A tension, therefore, exists within the sources of a civilisation’s advancement: does it emanate from modernity or pre-modernity, from logic or pre-logic, and which people are ascribed which inherent characteristics? The topic is obviously fraught for Africans. As Adichie put it in her keynote address at the Nelson Mandela Tribute in Johannesburg the day before Abantu, ‘history is invented for us’. And, at Abantu: ‘As Africans, we don’t engage enough with our history, especially before the colonialists came.’

There is a beauty and a danger to this line of thought. The project of reclamation, though valuable, can become unnecessarily reductive, lacking in both dynamism and accountability. In too many instances, denouncing ‘theory’, or collective and cumulative thought, can have unintended consequences. In our efforts and in our ‘instinct to protect’, there should also be an instinct to grow, de-centre and self-educate about the systemic issues affecting so many people. Adichie’s politics have a long tradition, even in African literature—the debate about writing in African versus colonial languages, for instance, runs parallel. The ‘accusation of newness’ levelled at feminism in Africa necessarily creates a burden of proving precolonial or indigenous feminisms, and centring them. In undertaking this important work, selective ancestral nostalgia is not enough. We must be able to step outside of ourselves and our personal histories. Our current understandings should speak to the heterogeneity of the African precolonial experience, which colonialism sought to narrow. History tells us Africans illustrate the full spectrum of humanity in gender identity, sexual orientation and social class, among other things. Thus African feminisms must help us to conceive and make sense of the world of today while seeking to honour past experiences on a vast continent. The perpetual ‘before the colonial fall’ innocence that hangs over discussions that decentre racial or geopolitical identity and centre other African identities is unproductive and dishonest.

That Adichie has previously devalued postcolonial theory—a study meant to balance the power relationship between colonist and colonial subject and so quite relevant to the Africa she loves—could account for her less-than-modern views on imperialism. (The case of her individualistic take on the United States’s political establishment being relevant here.) She also admits to a kind of self-imposed social isolation: she does not have social media and doesn’t search for feedback to her words, instead waiting for any noise to grow loud enough to reach her team. Her level of understanding of the mechanics of power is therefore set to remain shallow, untested and not increasing in rigour, which the work of the community could provide. This is tricky territory for a cultural commentator to land in.

Events that seem to spring up organically, out of the blue, are nonetheless studied by society for patterns and historical origins, in order to help solve problems better in the future. A useful tool for social formations against oppression is sociopolitical development theory, which expands on studies of empowerment and activism in community psychology. It is essentially the theory of rising political consciousness as observed through the formations of oppressed peoples in the past and present, and it seeks to understand what takes someone from uninformed inaction to sustained, informed, strategic action. In a paper examining the emerging theory, published in 2003, Roderick J Watts, Nat Chioke Williams and Robert J Jagers identify five stages of sociopolitical development:

These stages demonstrate the journey from self-interested responses to collective action—a process that requires awareness. Awareness, in turn, should be tested over and again, by engaging with sources external to yourself, with knowledge and experiences foreign to yourself. Failing at awareness and robust collective engagement creates a predictable pattern of stagnant thinking. The stakes for this, depending on your audience and platform, can be high.

In a piece published by the Daily Nation Kenya in 2013, Gloria Minage uses colonial tropes of respectability to describe Adichie’s edge in the African literary stakes, writing: ‘Many artists and writers in general like to excuse their shabbiness, bad habits and careless grooming to “art”’. Adichie is further described as ‘one of the very few African writers who have taken image management very seriously’. African writers are instructed to ‘deliberately teach themselves to be well-groomed, proper in speech and mannerism and smart externally as they are internally’.

This is certainly the unmistakable experience one has of Adichie up close: beauty, poise and charm. At Abantu, when the floor is opened to the audience, gender activist Kwezilomso Mbandazayo asked [parts paraphrased]: ‘Feminism was a safe haven for short, ugly, queer women like me. It seems that the ambassadors that feminism chooses now are shifting this reality and shrinking that space. What place is left for us?’ Adichie attempts to answer, but her response is punctuated by prolonged, seemingly panicked pauses and ultimately she appears at a loss, at one point joking that she should ask her mother why she was born looking like she does. She admits to privilege and riffs with Gqola that the latter is not ‘off the hook’ either, after Gqola describes herself as untidy and also in possession of an inconvenient femininity. It is an illustration of isolation: it seems to be the first time Adichie has been made aware of, or been confronted with, the discussion of beauty privilege in feminist circles. The question more or less goes unanswered, the conversation halts.

What is termed ‘the trans question’—a topic Adichie should by now be quite practised in thoughtfully answering—yields similar results. The pained, prolonged pauses and contradictory soundbites—some seemingly well-meaning—result in listeners taking away ideas about Adichie’s professed good intentions rather than a responsible engagement with the issue, and with her past comments. Adichie once famously—and now ironically—told a conservative pundit on a BBC programme, ‘I am sorry, but if you are a white man, you don’t get to define what racism is. You really don’t.’ The myth of innocence is pervasive.

To return to my conversation with Ijangolet Ogwang, it was clear that the work involved in setting oneself up and promoting oneself as a ‘voice’ might prove challenging for her, as she writes in the evenings and works a demanding consultancy job in business finance by day. The gamble in credibility may pay off initially, but as one’s voice is amplified it is also increasingly scrutinised for veracity—staying accurate and at the leading edge would be a third full-time job, if she was to do it well. She would simply not have the time. 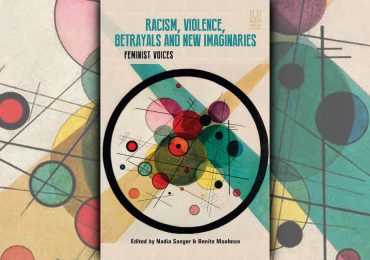