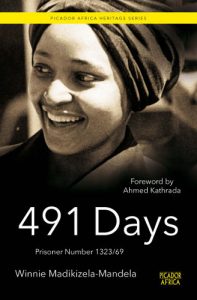 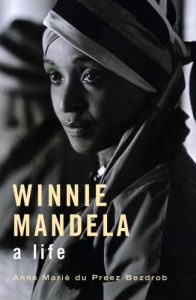 When I interviewed Madikizela-Mandela on 12 August 2016, she said: ‘I usually say that one day I’ll also be introduced to the Stratcom Winnie. Andimazi lo bathetha ngaye. Ndazi uNomzamo Madikizela.’ At the time of the interview I had no knowledge of Stratcom, the ‘strategic communications’ division responsible for carrying out the apartheid state’s disinformation campaigns that, since Madikizela-Mandela’s death last month, has made so many headlines.

Journalist Anne Marie du Preez Bezdrob’s biography, Winnie Mandela: A Life, published fourteen years ago this year, certainly does not expose Stratcom and its role in presenting us with distortions and fabrications around her subject. But I’m not sure if a biography like Du Preez Bezdrob’s, which imagines Winnie, while languishing in solitary confinement, reassuring herself that not all Afrikaners were as evil as her interrogators, would be quite of the politically rigorous scope required to include exposing a campaign of psychological warfare in its historical sweep. In fact, Du Preez Bezdrob’s text enters territory that would be laughable if it wasn’t so dumbfounding: for example, she does not depict Winnie as thinking about her two children at all while in solitary confinement. To imagine a mother of two politically orphaned daughters, aged ten and eleven, preoccupying herself with identifying the few proverbial good apples among her jailors, in between severe panic attacks, rather than worrying over the welfare of her children, strikes me as the height of biographical license.

Other sources, of course, suggest that Zindziswa and Zenani Mandela were constantly on their mother’s mind. Take their mother’s own words, for a start: her opening remarks in the Epilogue to her memoir, 491 Days: Prisoner Number 1323/69, concern her children—namely, her regrets about not having had the chance to raise them because of her involvement in the anti-apartheid movement:

I was fearful to [revisit those times], afraid of hurting myself and hurting my children because in hindsight you cannot help but think, ‘What did I do to my children?’ […] When I was in detention for all those months, my two children nearly died. When I came out they were so lean; they had had such a hard time. They were covered in sores, malnutrition sores. And they wonder why I am like I am.

In Du Preez Bezdrob’s book, the notion of ‘good Afrikaners’ is introduced in the wake of Winnie being coldly informed that her stepson, Nelson Mandela’s first-born, Thembi, had been killed in a car accident. Winnie’s resulting breakdown should come as no surprise: her distance from her daughters; the letters that never seemed to reach anyone regarding information on whether they were being looked after; her husband losing a son he would not be able to bury, given his incarceration, causing him to relive the nightmare of being denied the request to attend his own mother’s funeral in 1968—the latest news was a straw to break any camel’s back. But Du Preez Bezdrob writes:

She knew the security police were a special breed, with a disregard for human life that enabled them to torture people to death for any reason, or no reason at all. She knew that neither all whites not all Afrikaners were like that, but it brought her little consolation; and she was disturbed by the bitterness she felt towards Swanepoel and his associates, fearing it would turn to hatred and that she would end up being no better than them.

This passage left me stunned. A March 7, 2013 conversation at Cornell University, ‘Reading the Writing’, between Professors Toni Morrison and Claudia Brodsky came to mind. Morrison discusses the white gaze with Brodsky—the language associated with it, and how the purpose of hers and other authors’ writing (such as the works of Maya Angelou and Toni Cade Bambara) is to not preoccupy itself with responding to it. With Morrison’s wisdom in mind, one reading of Du Preez Bezdrob’s A Life is that it deploys the white gaze to palliate white guilt. It aids in presenting Winnie’s rage as foretold by a personal failing of hers. It empowers people to, as Winnie writes, ‘have [the] nerve to say, “Oh Madiba is such a peaceful person, you know. We wonder how he had such a wife who is so violent?”’

Du Preez Bezdrob’s bizarre recounting of Winnie’s most gruelling days in solitary confinement, which she prefaces with the disclaimer that she is using creative license to reimagine the moments that follow, speaks to the dangerous power of the white gaze in eliding black pain; and, less obviously, to the role white women have played in ensuring open space for the quiet violence of white privilege. By way of further example, her book takes pains to highlight white people’s charity, in the form of the visits Winnie received, following her banishment to Brandfort in 1977, from the likes of Illona Kleinschmidt, Bunty Biggs and Ray Carter—as if such acts had the disproportionate power to somehow bleach out the multitude of apartheid’s sins. The white gaze: its own kind of Stratcom.

In reading 491 Days, by contrast, we learn some of the ways that white women held their own when it came to reinforcing apartheid’s violence. The figure of Matron Zeelie of the women’s prison where Winnie was incarcerated points us in this direction. In a journal entry from 2 July, 1970, Winnie records being deprived of her right to access to the items brought to her by her sister Iris Xaba by Matron Zeelie, on the basis of being an awaiting-trial prisoner. A July 23, 1970 entry records the following:

On 22.7.70 we did not have lunch together. Wardress Bezuidenhout was instructed by Zeelie in my presence to lock me up in the hospital and the others in their single cells. We were put together after lunch. We obviously lunched together on 21.7.70 to enable Zeelie to strip me of all my possessions in hospital. I am told by the prisoner who was present during the search that Zeelie and Bezuidenhout went through each item thoroughly as if they were looking for something.

In her Foreword to her novel Beloved, Toni Morrison explains that while Margaret Garner’s story of escape and murder during the era of slavery was fascinating, the facts offered too little ‘imaginative space’. It was therefore necessary for her, as a writer, to ‘invent her thoughts, plumb them for a subtext that was historically true in essence, but not strictly factual in order to relate her history to contemporary issues about freedom, responsibility, and women’s “place”’.

Prison notes, journals and letters, by contrast—the sources that make up 491 Days—can often be found wanting in allowing us the opportunity to fully appreciate the gravity of a person’s experience. Sometimes Madikizela-Mandela writes in full sentences. Other times she uses shorthand. But reading them alongside hearing her tell her story in interviews, such as her televised conversation with Felicia Mabuza-Suttle in 2011, helps fill the gaps in. Mabuza-Suttle invites Winnie to imagine the interview as a conversation with her grandchildren, enquiring about the history of the dark days of apartheid:

Felicia Mabuza-Suttle: Your other grandchild asks, ‘Grandma there was this thing called interrogation. It was really harsh.’

Winnie Madikizela-Mandela: Our particular interrogation, I was part of twenty-two of us who were detained. By the way you have no idea of who else was detained. I thought I was alone … It becomes difficult to swallow a glass of water. You just become an object that belongs to them. I was interrogated continuously for seven days and seven nights … the body has a way of dealing with extreme pain. I welcomed the moments where I fainted. The body took care of itself.

Returning to and meditating on 491 Days, without having had the chance of obtaining an extensive primary account of that time of my own, has me reflecting on what this book means for the archiving and remembrance of black women’s lived experiences under apartheid. What kinds of losses were suffered? What kind of person emerges from such suffering? While reading 491 Days, one of the last lines of the Epilogue jumps out: ‘If you keep pounding and pounding on the same spot the feeling dies, the nerves die.’ Similarly, halfway through a journal entry from July 21, 1970: ‘I will not be able to control myself that much again.’ What kind of remembering follows reading these lines? What types of existing conclusions are reinforced?

Du Preez Bezdrob attempts to deal with the issue of black women’s pain in Chapter 16 of A Life, in which she discusses Post-Traumatic Stress Disorder (PTSD) and how it plays a role in the evolution of the subject from victim to perpetrator. She explains, ‘Experts believe that for some people, the pain of being a victim becomes unbearable, and they attempt to “shift” their own pain onto someone else.’ Here Du Preez Bezdrob attempts to lay a foundation for making sense of the alleged disappearances and deaths linked to Madikizela-Mandela, and more broadly of the violence that occurred in the nineteen-eighties within the context of black victimhood. However, when we think about Winnie and black resistance in the nineteen-eighties solely through this lens we end up ignoring the moments of agency and deliberateness: Madikizela-Mandela’s defiance against censorship, for example; her refusal to adhere to the terms of her banning orders; or how she mobilised women around a theory of militant motherhood, calling on them to defend and avenge the blood of their children. So how do we, like Du Preez Bezdrob, reflect on the effect of trauma, but without stripping Winnie of her agency and her deliberateness in the years following solitary confinement?

In his book Askari: A Story of Collaboration and Betrayal in the Anti-Apartheid Struggle, Jacob Dlamini quotes a 1986 Sechaba interview with Chris Hani, who defends the practice of necklacing, saying:

This statement has in no way tainted Hani’s legacy or memory. On the other hand, Winnie’s well-known utterance, often presented without context, ‘With our boxes of matches and our necklaces, we shall liberate this country’, so often led to her virtual lynching in the media; and it was almost never mentioned alongside the words which preceded it: ‘We shall use the same language the Boers are using against us. They know only one language: the language of the Casper.’ But how different is this from Hani’s utterance, or indeed Nelson Mandela’s famous 1961 call to arms, ‘It is useless and futile to continue talking peace and non-violence against a government whose reply is only savage attacks on an unarmed and defenceless people’—?

Perhaps in demonising Winnie for drawing a line in the sand or, as a friend put it, ‘bringing a gun to a gun fight’, the post-apartheid era has missed a double opportunity: first, to confront and truly excavate the structural sources of violence in this country; and second, to mourn the violence black people suffered at one another’s hands. 491 Days could serve as a point of departure here: a catalyst for the incomplete process of collective black mourning. Winnie, who made herself visible, at great personal cost, throughout the Struggle, in aid of keeping the embers of apartheid resistance alive, became the embodiment of black suffering. By alienating her in the post-apartheid dispensation and allowing the idea of moral equivalence between her actions and those of the likes of Eugene de Kock and others—who tortured, maimed and murdered to keep the structure of white supremacy intact—to take root, we have denied black people the right to adequately mourn and begin the journey towards healing.

Winnie’s passing on 2 April 2018 left me scrambling for glimpses of her life—crumbs that I suddenly needed to hold on to, as it dawned that the Struggle icon had truly departed. I opened my copy of Du Preez Bezdrob’s A Life, which I had taken with me to Winnie’s home for her to autograph. It’s inscribed: ‘To have the history of those painful days written by a white woman I do not know! My love always, Winnie Madikizela-Mandela.’