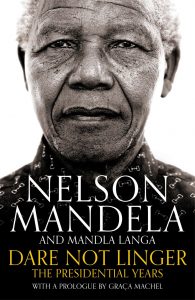 To mark the publication of Nelson Mandela’s Dare Not Linger: The Presidential Years, which goes on sale today, The JRB will publish an interview between Contributing Editor Bongani Madondo and Mandela’s co-author, Mandla Langa (who serves on our Editorial Advisory Panel), in our 7th issue, which comes out Monday 06 November.

Today, we bring you an exclusive preview of this interview:

Bongani Madondo for The JRB: What was in your head when you were asked/tasked to work on this project, at least from a literary and intellectual perspective?

Mandla Langa: It was a daunting but exhilarating task. Every writer enjoys a challenge that plunges him or her into uncharted waters. I had to dig deep and explore different literary devices to make a story of a great and iconic leader ‘tellable’. The new buzzword is ‘erasure’ and it is my belief that great people, especially if they stand for ideals that are inimical to the interests of the powerful, are erased via misinterpretation. They have to conform to certain ideas that others hold. For instance, commentators like the late Stephen Ellis went to great lengths to remove political agency from black leaders. Oliver Tambo and Nelson Mandela, according to him, could not have had the requisite intellectual capacity to wage a struggle against white supremacist regimes. They had to be pawns of Communists, who were white and came from Moscow. The new erasure, favoured by soi-disant revolutionaries and guilt-ridden transgressors, is depicting Mandela as an irreedemable softie, a reconciliation junkie—an image equally pleasing to people about to commit crimes in the name of blackness and those who committed (and continue to commit) crimes in the name of whiteness.

At the outset, I remembered James Baldwin’s comment on Diana Ross’s performance, when she played the role of Billie Holiday in the film Lady Sings the Blues. Rather than imitate Lady Day, Diana Ross paid homage to her spirit and beauty—her triumph in the face of insurmountable odds. ‘Diana Ross,’ he wrote, ‘clearly, respected Billie too much to try to imitate her. She picks up on Billie’s beat, and, for the rest, uses herself … to create a portrait’. It is my belief that in accepting Mandela in all his complex configurations, we can start coming to terms with the kind of greatness we are collectively capable of reaching.

‘I have discovered the secret that after climbing a great hill, one only finds that there are many more hills to climb. I have taken a moment here to rest, to steal a view of the glorious vista that surrounds me, to look back on the distance I have come. But I can rest only for a moment, for with freedom comes responsibilities, and I dare not linger, for my long walk is not ended.’
—Nelson Mandela, Long Walk to Freedom

Dare Not Linger: The Presidential Years is the story of Mandela’s presidential years, drawing heavily on the memoir he began to write as he prepared to finish his term of office but was unable to finish. Now, acclaimed South African writer Mandla Langa has completed the task, using Mandela’s unfinished draft, detailed notes that Mandela made as events were unfolding and a wealth of unseen archive material. With a prologue by Mandela’s widow, Graça Machel, the result is a vivid and often inspirational account of Mandela’s presidencyand the creation of a new democracy. It tells the extraordinary story of a country in transition and the challenges Mandela faced as he strove to make his vision for a liberated South Africa a reality.

With a prologue by Graça Machel.