As part of the programme for an international congress on ‘The work of John Maxwell Coetzee in Latin America’, JM Coetzee read a new story called ‘The Glass Abattoir’ from a forthcoming book that will feature the character Elizabeth Costello.

In the discussion that follows the reading, Coetzee talks about the moral didactic purpose and the notion of the psychological crisis in his work, and his reasons for choosing fiction, instead of essays or lectures, to explore these ideas.

The event was held in Buenos Aires, Argentina, on 12 and 13 September, and was organised by the Museum of Latin American Art of Buenos Aires (MALBA) with the support of the Coetzee Chair at the National University of San Martín.

‘The Glass Abattoir’ is summed up thus: ‘Among the papers of his old mother, a man discovers documents that reveal his horror by the cruel efficiency with which the animals are processed and arranged in the slaughterhouses and biological laboratories of the world.’

Following the reading, Coetzee spoke to Anna Kazumi Stahl, writer and academic coordinator of the Coetzee Chair, about the book, which will be called ‘Cuentos morales’—‘Moral Stories’ or ‘Moral Tales’—a collection of seven texts that will be published first in Spanish. 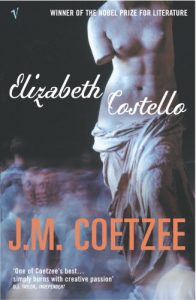 ‘For the most part, “Moral Stories” continue the story of the character Elizabeth Costello,’ Coetzee says, ‘whom I’ve already devoted a book to under the title Elizabeth Costello: Eight Lessons. The subtitle of the book, ‘eight lessons’, already suggested a certain moral didactic purpose and, just to give an example, the lessons dealt with such questions as the pornography of evil; whether a writer should devote space to describing evil acts that may in fact play to a perverse appetite for horror or cruelty in the reader. Two of the lessons in Elizabeth Costello dealt with the treatment of animals, particularly with factory farming in the modern world.

‘In the “Moral Tales” (sic), the book you’re now talking about, Elizabeth is an old woman facing her death, but with a fairly fierce sense that there are things she still wants to say or have said on her behalf before she disappears from the scene.’

Stahl says ‘The Glass Abattoir’ and Elizabeth Costello test certain notions of form: ‘they are fiction, but not entirely’, and asks Coetzee why he chooses to write didactic fiction.

‘The question, to me, is a very interesting one. I am enough of an Aristotelian to believe that fiction, or my fictions at least, are representations of the real world. So I have to ask myself what it is that I am actually representing. Now, if you look at the story I was reading tonight, ‘The Glass Abattoir’, what I believe I’m representing is a woman going through a certain crisis, which is to some extent connected to the fact that death is around the corner for her. And the crisis has two aspects.

‘In the first place, it’s a moral crisis. A crisis about how she is to behave and indeed how she is to live in the world knowing what she knows, in particular, about the lives that animals are forced to lead. In the second place, it is a psychological crisis that she is undergoing. Is she right to believe that the world is a place of unimaginable horror, in which a small minority of people see the horror while everyone else is blind to it? Or, is she suffering from a paranoid delusion, in which she sees an evil conspiracy all around her when in fact there is no real conspiracy of silence?

Stahl says the story prompts a question about writing: ‘Is writing for a memory beyond one’s individual ephemeral [existence] impossible to guarantee? Is writing too volubal an instrument for that?’

‘The son in the story, John, is plainly a good and intelligent person, who loves his mother and wants the best for her. At the same time he is incapable of entering her mind, or entering her state of mind anyway. Indeed to a degree he thinks there’s something wrong with his mother. What exactly he thinks is wrong with her I won’t go into, there isn’t time for that because the two of them have a long history together.

‘But in the story she is making a fairly naked appeal to him and that appeal is to not allow the record of her thinking to die with her. Now, Elizabeth Costello is a writer and of course every writer shares to some extend a hope that what they leave behind will outlive them. But I think the issue with Elizabeth is not so much that her writing should survive her, it is that her vision of the world, which as I say she realises is a minority vision and perhaps even a crazy vision, should not be obliterated with her death.

‘So the question is not really one of memory, ‘will I be remembered?’, it is a question of there being someone to carry on this vision she has, which at the same time she mistrusts.’

One thought on “[The JRB Daily] JM Coetzee reads a new story, ‘The Glass Abattoir’, and announces a new book to feature Elizabeth Costello”