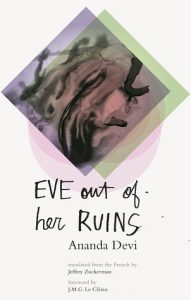 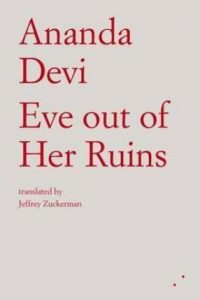 Mauritian author Ananda Devi’s Eve Out of Her Ruins has been highly lauded since appearing in English, in late 2016, courtesy Deep Vellum and Les Fugitives presses.

The book veers away from beaches and turquoise waters, exposing the side of Mauritius tourists never see. In it Devi charts, with notable poeticism, the lives of four friends as they attempt to escape the vortex of violence, poverty and marginalisation they find themselves in.

Eve Out of Her Ruins was translated from the French by Jeffrey Zuckerman, while Nobel Prize in Literature winner and fellow Mauritian JMG le Clézio lends an introduction to the book, calling Devi ‘a truly great writer’.

The latest recognition for Eve Out of Her Ruins comes in the form of the 2017 Firecracker Award for Fiction, from the Community of Literary Magazines and Presses. The prize judges had the following to say about Devi’s win:

The Ananda Devi of Eve Out of Her Ruins is a woman of few words, but it’s clear from the very first page that she’s a master craftsperson of precision, vibrancy and voice. Through the distinct narratives of four young Mauritians, she unfolds a kaleidoscope of elegiac poeticism and harrowing immediacy, magically bestowing brilliance to the dark and violent corners of their lives. Eve Out of Her Ruins twists the reader’s mind into a brutally honest and heartbreaking knot, which cannot be undone. 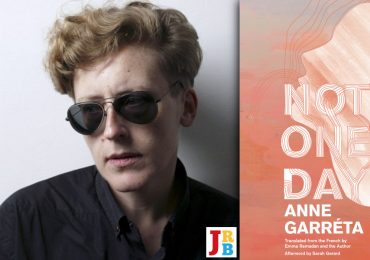