Pan Macmillan has shared an exclusive extract from The Innocence of Roast Chicken by Jo-Anne Richards.

First published back in 1996, The Innocence of Roast Chicken became an instant classic at home, and went on to be published internationally.

‘The Innocence of Roast Chicken was a groundbreaking novel. To say it still has relevance to our worldly existence and sense of identity today is an understatement.’ – Ronnie Kasrils

The novel was recently rereleased as part of the Picador Africa Heritage Classics collection – books that deserve to find a new audience and be read again.

When it first appeared, The Innocence of Roast Chicken was nominated for the Impac International Dublin Literary Award and chosen as an ‘outstanding debut novel’ by a British book chain.

‘The Innocence of Roast Chicken was a story that just wouldn’t go away. I denied it for a good three years, but it stubbornly refused to budge. It became all I could focus on. Fearful of waking my young family, I spent my nights huddled on the bathroom floor with a torch, scribbling into a notebook. On that cold floor, my debut novel took shape. A farm materialised. A child was born, who loved it and believed that ‘everyone should have a farm like that in their childhood’. But I could also see the brutal nature of her coming of age, and the adult she would become.’

The Innocence of Roast Chicken focuses on an Afrikaans/English family in the Eastern Cape and their idyllic life on their grandparents’ farm, seen through the eyes of the little girl, Kate, and the subtle web of relationships that is shattered by a horrifying incident in the mid-1960s.

Scenes from Kate’s early life are juxtaposed with Johannesburg in 1989 when Kate, now married to Joe, a human rights lawyer, stands aside from the general euphoria that is gripping the nation.

Her despair, both with her marriage and with the national situation, resolutely returns to a brutal incident one Christmas day when Kate was thrust into an awareness of what lay beneath her blissful childhood.

Everyone should have a farm like that in their childhood – too idyllic to be real outside the tangible world of a child’s imagining. And it really was like that, the perfect background for a charmed and untouched childhood. The farm itself was untouched: by ugliness, unpleasantness, poverty, politics, or so it seemed to me. Until that particular year when it was spoiled. Everything was spoiled.

As an intense teenager, years later, filled with angst and misplaced sensitivity, I wrote a poem about my childhood, I wrote of a white sheet hanging on the line on a summer’s day, rippling and flapping in a gentle breeze, warmed and dried by the cloudless heat of the day. Then I showed it fallen, a graceless heap on the grassless ground, soiled by filthy footprints which could have been mud, but which looked a bit like blood.

Don’t think badly of me. Everyone is filled with self-pity at fourteen. And for many years I carried the full guilt of that year. I lugged the intense, silent burden of having caused everything that happened by doing something very bad, or not standing in the way of the bad things – to field and divert them from us, from my farm. I had too much faith in the way things would continue, in the beauty of before.

When I was older, I realised that, after all, I had been just a child, powerless to deflect the horror, not strong enough to be chosen as the cosmic goalie. Then I felt sorry for myself, until I was older still, and the guilt – more collective this time – settled again. That was when I locked myself away from all the perplexing ugliness of life, from any taint of hurt or violence.

But I didn’t set out to tell about 1966. I don’t want to talk about it. I want to describe how it really was, how it was before – before the ugliness. I want to tell you about the soft, lilting nature of my holidays there.

This is how it really was. Each morning at five we awoke, my two brothers and I, to the same sounds. The drowsy sounds of hundreds of chickens, interspersed with the sharp crow of awakened roosters. Lying very still in my bed I could hear the grating beat of the belt-driven generator. From the bedroom next door, the early news on the Afrikaans service, then my grandmother’s soft-intoned, Afrikaans-accented reading from the English Bible, before my grandfather’s deep English voice joined hers in the Lord’s Prayer.

The skree-bang of the fly-screen door into the kitchen and the cleaning noises in the lounge – invisible cleaning, for we never saw it being done. When the smells of bacon and Jungle Oats finally reached us, we catapulted noisily from our three beds, just in time to join my father heading for his unfailing early morning swim.

Before the full sun of the morning heated the dusty path through the orchard, I trotted barefoot alongside my father while my brothers raced for the pool. We joined them only after my father and I had stood to eat still-cool figs from the tree. And he invariably said: ‘The only way to eat figs, straight off the tree before the sun’s properly up.’ 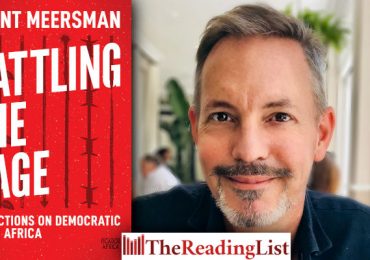 Read More
[Sponsored] Listen to an excerpt from the…
December 10, 2020 No Comment

Read More
[Sponsored] Read an exclusive excerpt from A…
October 8, 2020 No Comment