The shortlist for the Women’s Prize for Fiction, awarded annually to the ‘best, eligible full-length novel in English’ by a woman, has been announced.

The prize is worth £30,000 (about R555 500) and is open to any full length novel, in any genre, written in English by a woman of any nationality, provided that the novel is published in print form in the United Kingdom.

Prize organisers describe this year’s shortlist as featuring ‘a diverse range of voices and nationalities’.

Nigerian novelist Oyinkan Braithwaite has made the shortlist with her debut novel, My Sister, the Serial Killer, which The JRB Editor Jennifer Malec describes as ‘a novel of understated authenticity and gentle power’.

Diana Evans’s Ordinary People, the story of a disaffected mixed-race couple that Wamuwi Mbao, in his review of the book for The JRB, called ‘Scenes from a Marriage for the Beyhive generation’ also makes the list, as does Tayari Jones’s An American Marriage, a novel about a young African American couple who are ripped apart when the husband is sentenced to twelve years in prison for a crime he did not commit.

But it is reimaginings of women in history that dominate shortlist this year: Pat Barker’s The Silence of the Girls, a retelling of The Iliad, Madeline Miller’s Circe, a new account of the witch who seduces Odysseus, and Anna Burns’s Milkman, set during the Northern Ireland Troubles, which won the 2018 Man Booker Prize.

Longlisted books Freshwater by Akwaeke Emezi, the first non-binary transgender author to be nominated for the prize, and Normal People, the new bestseller by Sally Rooney, are the surprise omissions from the shortlist. 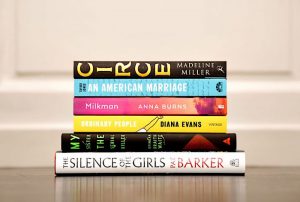 It’s a fantastic shortlist; exciting, vibrant, adventurous. We fell totally in love with these books and the amazing worlds they created. These books are fiction at its best – brilliant, courageous and utterly captivating.

The judges for the 2019 Women’s Prize for Fiction are Williams, author, historian and Professor of History at the University of Reading; Arifa Akbar, journalist and critic; Dolly Alderton, columnist, broadcaster and author; Leyla Hussein, campaigner and psychotherapist and Sarah Wood, digital entrepreneur.

Read More
‘Writing is open to everyone, regardless of…
July 14, 2022 No Comment