The JRB presents an excerpt from North, the new novel from Frank Owen, the pen name of Diane Awerbuck and Alex Latimer. 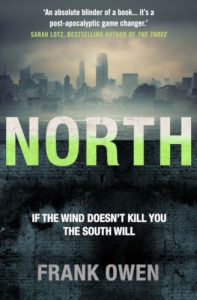 You’re not even born yet, but if I don’t set this down, I’m afraid that I’ll forget exactly how it was. Ma had her recipe book, but you’re going to have your own history written plain and clear.

Baby, I want you to understand some things about the people you came from, how they fought and struggled so that you could be alive and here and with me. The world is going to be different by the time you’re grown up in it, and for that I can only be grateful.

It was bad. And the War was only the beginning.

After it ended, and Renard built his wall between the North and South, the wind still blew the sicknesses from above. And it wasn’t like bird flu or Ebola or the plague or something where you knew how it worked, even if it was terrible. The viruses took everyone differently. The worst were the brain viruses, because there wasn’t a whole lot you could tell from the outside: no peeling flesh or blackened toes. Mama—that’s your grandma Ruth, and don’t you forget her—said it was like they were burrowing into the soft meat and chewing through the wiring that made us kind to one another. The men always had it the worst, because they had more juices to turn sour. Testosterone makes you brave and adventurous, but when the worms get in it also makes you want to rip other creatures limb from limb.

We learnt that the hard way.

So when the wind blew, Ma and I would camp in the sitting room and tell each other stories to pass the time. Ma was real keen on passing on her baby-birthing know-how, but sometimes she also told me bits of her life. The details would change between tellings, and she’d get to a point I’d recognise and then change tack completely so I could never tell what was true and what was wishing.

Baby, there are times when you can feel change coming. I mean, actually feel it, like history is being made and you’re right in the middle of it. My moment like that came when I first saw your daddy. I felt something when I looked him in the eyes that wasn’t romance and moonlight, but some other thing, unpretty as a weed, and just as tough. Love can be like that.

That was my first moment. The next one came not long after that, when he’d gone away and left us. He said he’d be back. The rest of us from the ghost colony—Ma and me, but also Sam and Pete and a whole bunch of the other Southern survivors—were resting against a rock face on the bank of the North Platte, trying to keep the brewing storm at our backs, deciding what to do next now that we’d arrived. I was tired, baby, in a way that I hope you will never be. It’s not only about the body, and one day you’ll understand that too. A person on a horse gets just as tired from looking back over their shoulder, and I was, for sure, worn down with sorrow and with hoping that Dyce would show. I remember the white lightning in the distance, and how it made the horses restless. They were just as hungry and frightened as we all were, and they were tiptoeing on their hooves that had gone soft as rubber from the time spent wading in the water.

That lightning gave me another moment. It showed us the Northern border wall, and the strange orange of electric street lights beyond it, and after that the glow of high-rise apartment blocks, now and again hidden by sheets of water. Baby, none of it seemed real. It was like looking across onto another planet, or back through time to how things once were.

We were really going to cross into the North! It was unbelievable.

It made everything I knew seem wrong. The Wall had always been part of us. When Renard had set up the concrete and the border guards after the War, he had in mind to stop anyone crossing one way or the other. He knew that it would strangle the South. And it worked. We got poorer. And angrier.

But it was the winds that killed most people. We were trapped in the heart of the South, hiding and watching as people took ill and wasted away. No two corpses that I ever saw died from the same disease. You could tell by the way the eyes bulged or sank, were milky or bloodshot, the red trickling like jewelry down to their ears.

For a long time those winds, loaded with their viruses, whittled us down. Millions of people died, I guess. Our immune systems were weak—but there was something else too. You have to want to survive. That’s the most important thing. You have to believe there is a future you want to be in. Not everyone does.

Some folk headed for the coast, hoping to find boats to take them across the Pacific or the Atlantic: anywhere, like the slave ships all those years ago, but going the other way. Dyce’s brother Garrett—your uncle Garrett, he would have been, and your aunt Bethie too—had that grand plan. But the thing was, the sea air was worse. It was wet, and so it actually nurtured the viruses, kept them living for longer, suspended in the air like poisonous pollen. It wasn’t fair.

But if Dyce had made it to the coast with Garrett, he would have died before we had even met, and then you wouldn’t have happened. It was fate that your parents met in that world carved down to the bone. Do you believe that, baby? Fate that two people, so different, could fall in love in a time when love was a useless thing?

But love always leads somewhere else.