The JRB is pleased to present an excerpt from Kagiso Lesego Molope’s new novel, Such a Lonely, Lovely Road. 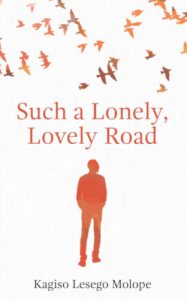 It’s confusing, you know, to feel on the one hand sad and sorry that someone you love is dead, and then on the other hand utterly relieved. Since I am many different things, many different men, I suppose there’s bound to be confusion here and there. So, sorry and relieved is what I felt when, that cold morning in May, Sediba, my former lover, phoned to tell me that my father had died suddenly, without warning.

I had been dreaming about him—my lover, not my father—and longing for him more than my body could stand. One minute he was in the dream with me and the next I was crawling across the bed on my stomach to pick up the phone, pushing back the pain when I noticed as I did every morning that the bed was too large and too empty.

Before I could say, ‘Hello,’ he was launching into it, starting and stopping as though he dreaded getting to the point. He told me my father had not had the chance to see his first patient that morning. His secretary had found him lying on the floor near the door, right hand clutching his left arm … and so on.

I let him speak, the details becoming less important as he carried on. ‘Kabza,’ he whispered, as if to soften the blow. ‘Eish! Eish, Jo. Askies.’ You know how everyone mixes languages. He and I had always done this, except when we were alone we’d pour in a lot more English. We’d never do it around our friends in Kasi because the way we spoke to each other was as much a secret as we were. I wondered if I might still be dreaming, because even as his voice came from the other end of the line, my flat carried the familiar scent of his skin. I could feel my tongue moving to taste something that was not there.

I knew I was supposed to be thinking about my father but my mind raced back, sifting through time and details, calculating. How long had it been since the caller and I had last spoken to each other? Had it been months? How many months? I wanted to ask, but first I had to find my voice.

I made my way to the kitchen to fetch myself some water, phone in hand, hoping to clear my throat. As I walked I got a bit panicked because he sounded so distant, even in offering his condolences. He kept calling me Jo, like he were only speaking to an old friend, just one of the guys back home. My heart ached. I started wondering if he might not remember loving me.

Above the fridge, the clock carried on at its usual languid pace, unaffected by the news. My feet tapped the floor for the warm spot just to the left of the sink. Winter seemed to have come early because lately I needed an extra blanket in bed and the floor was always cold, nearly numbing my toes.

‘Kabza,’ I heard him say just as I found that spot, ‘Shorty came and fetched him …’

Shorty. Our impossibly tall childhood friend who worked at the mortuary. Shorty, the one who came in the night and carried out the dead? Then I stopped, thinking: Wait. Hao! My father at the mortuary? I couldn’t imagine it, that he’d drop dead in the middle of the day and have his body carried out for all to see. For children playing on the streets to see. Not my quiet, private, dignified father.

I started thinking that maybe there had been a mistake. I could call the surgery, and as always the receptionist Neo would answer and hand him the phone. He’d pick up, pleased that it was his son and no one else disrupting a busy day. Then I could ask him professionally if he thought it was a myocardial infarction that he suffered. Would he need a bypass or would a stent be enough? He liked being the doctor even as a patient and we often joked about how he never trusted another physician to be as thorough as he was.

For a while my mind went on like this, until I became more than a little concerned that if I did phone he might in fact pick up and answer. Yes, of course, I wanted my father to be alive but it’s also true that I very much wanted him to be dead.

When the phone slipped and fell into the sink I made no attempt to pick it up and reconnect us. Now I felt a kind of energy I had not felt in years. That tightness in my neck behind my left ear, the knot that came from nights of staying on one side of the bed with my back to his side because I did not want to remember—that tightness seemed to ease. Even with tearful eyes, I found myself humming to the tune of ‘Summertime’ that was coming through the walls from my neighbour’s radio. I mean the rap, not the melancholy jazz song.

It’s not that I wasn’t devastated, because there’s no question that I was. I never had siblings and now with both my parents gone I was the only living member of my family. Just a few months before, as I saw it, I had killed my mother in that way we all fear killing our parents: I had failed to become what was expected of me. But my father was a different story. He and I had been in close touch since my mother’s death and I cherished our now-adult friendship, calling him every Friday to hear about his week and to ask him for advice about my work. The two of us talked now like children who hadn’t been allowed to be friends growing up—like we were just discovering one another. I held his opinion in very high esteem and he in turn told me how proud he was of me. His gift to me (or was it mine to him?) was to never speak of the thing that had ended my mother’s life. I had, I thought, managed not to kill him as well. His death was squarely on him.

Still, that is not what had me humming a happy tune. It sounds absurd and crass, but knowing that my father’s death threatened to turn my life upside down made it the best news I had heard in months. I would have to leave everything I had established: four months into my year of community service, I would have to resign from my job at a township clinic, sell my flat, go back home to start running my father’s surgery, and probably never return to Durban. Up until that moment I had been insisting that Durban was great, unlike Cape Town it was peaceful and suited me quite well—and there was truth in there somewhere, but as with other important things in my life, I had found a half-plausible line to explain away something I needed to hide.

The thing was, I had come to Durban under difficult circumstances to begin with and sought in it a refuge from my life before, from what I secretly called my ‘Cape Town mistakes’. It probably never works to try and make a home in the place you find in the immediate aftermath of a youthful blunder. It helps to know first what you’re looking for. I’d had to escape Cape Town and Durban was the first place I could think of, just far enough from home. By the time that phone call came, I had given it a solid try. I had thrown myself into the place, thinking that if I insisted, negotiated, coaxed the city long enough I could make it my own. But Durban had refused to embrace me, and the phone call about my father’s death offered an escape.

So what I did almost immediately was to get on with the business of peeling myself away, packing my bags with the anticipation of a person going on a trip he’d been meaning to take all his life. A whole new world awaited me, filled with things I had been longing for probably since I had left home at eighteen.