The cover image for the November 2018 issue of The JRB is excerpted from the new book Johannesburg Then and Now: a photograph of the Carmel Building on Diagonal Street taken in 1967.

The building is shown in full colour above in an image from the present day. Scroll for more ‘then and now’ photographs from Johannesburg, and to learn more about the book. 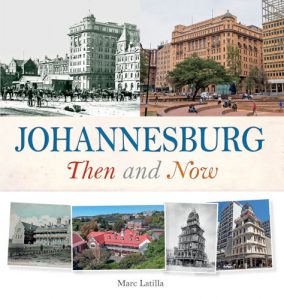 Johannesburg Then and Now
By Marc Latilla with photographs by Yeshiel Panchia
Penguin Random House, 2018

In less than a century, the jumble of shabby tents and lean-tos that constituted Johannesburg’s first settlement has grown into a modern metropolis of towering office buildings, high-rise apartments and sprawling suburbs. Its rapid development has been in no small measure the result of the fabulous wealth that lay in the goldrich deposits of the now-famous Witwatersrand basin.

The story of gold is also the story of Johannesburg, and in a fascinating series of photographic juxtapositions, Johannesburg Then and Now chronicles the city’s expansion from dusty mining camp to economic powerhouse. Rare archival photographs, dating from the eighteen-eighties to the nineteen-forties, are contrasted with vivid scenes of the modern city, providing a hitherto untold portrait of the Place of Gold.

Where possible, the modern-day photographs have been shot from the same locations as the originals. Detailed captions provide fascinating comparisons between the old and the new, while also illuminating features that have remained the same. Johannesburg Then and Now is a superb collection of images and text that will delight both local residents and visitors.

Read an excerpt from the book, covering the origins of Diagonal Street:

Diagonal Street, previously known as Jubilee Street, formed the western boundary of Randjeslaagte—the triangular piece of land that constituted Johannesburg’s original municipal area. End Street marked the eastern boundary of the triangle and Commissioner Street the base. The apex terminated at a point on Boundary Road, north of Hillbrow. Randjeslaagte was a piece of uitvalgrond—land left over after the Boer farmers had marked out their own properties. It was sandwiched between the farms of Braamfontein, Doornfontein and Turffontein. It was here, on 2.5 square kilometres of government-owned land, that the first 986 stands of the future town were laid out. Over time, the angle of the roads would dictate the shape of the buildings erected here. Two landmark buildings in Diagonal Street that date from Johannesburg’s earliest days are the Carmel Building (above), built in 1897, and Rosenberg’s Building (below), erected in 1905.