Flares exploded in the sky. Stun grenades fired into the water. From the dunes came a volley of gunshots. It was an Operation Neptune sting. Without thinking, Shuhood dived into a big pile of kelp, pulling the fronds over his face. He could hear the men being beaten up, the thud of boots striking bodies. Then somebody kicked him hard.

The JRB presents an excerpt from Poacher: Confessions From the Abalone Underworld by Kimon de Greef and Shuhood Abader, which our Editorial Advisory Panel member Richard Poplak called: ‘A stunning achievement. A classic South African narrative that includes questions of race, place, politics and morality. Intimate and wide-ranging, superbly researched and superbly written …’ 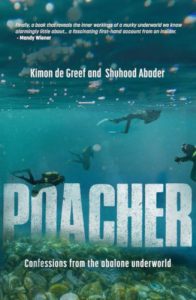 The top divers were all working at Bird Island, a marine reserve seventy kilometres offshore, earning up to R40,000 each on a single night, it was said. Though Shuhood was earning more than he had dreamed possible just a few months earlier, it was hard to be satisfied when bigger payoffs felt within reach.

But to dive Bird Island he needed to get a spot on one of the poaching boats. Most of the boat owners were divers who had invested their profits, charging other divers fees to reach the offshore beds. They only worked with people they trusted, giving word of their operations less than two hours before they launched.

Shuhood wanted to join them—not only for the money but from his desire, engrained since childhood, to match or exceed whatever his peers did. Each time he heard that another boat had gone to the island it aroused in him a bitter envy.

The boats were large, sleek rubber ducks with powerful engines for outgunning marine patrols. They were called ‘super-ducks’. The biggest could carry ten people or more. The Port Elizabeth divers were revolutionising the poaching game and within a few years superducks would be launching across the Cape. To chase them, the authorities got better vessels of their own, often using boats impounded from other poachers. The abalone trade was entering an explosive new phase.

In 2003, according to [Serge] Raemaekers’s research, there had been just four poaching boats operating in Port Elizabeth. By 2006, there were at least thirty-four. Nearly a third were longer than eight metres, with combined engine capacity of 150 horse power or greater. The value of some of the bigger boats, including their motors, trailers and towing vehicles, exceeded R1 million.

The vessels launched without divers or equipment, collecting them en route to avoid interception. Lookouts placed at strategic locations—harbours, police stations—alerted the skippers to any danger. Sometimes poachers staged decoy dives to draw patrols away from target reefs. When they finished, they dropped their catch for runners to collect, racing back to the slipway. Before landing, they rinsed their decks with petrol to destroy DNA evidence of carrying abalone.

Shuhood returned to Cape Town determined to ascend the poaching hierarchy. Through his network of divers he had heard about a crew he could join on a trip to Robben Island. But before he could go he had to appear in court for the Cape Point bust. The attorney representing them struck a plea bargain—only one of the Hangberg divers was found guilty, receiving a fine of R5,000—and Shuhood walked out of the courtroom to resume his diving career.

The boat launched in darkness from a quiet stretch of beach between Melkbos and Blouberg on the West Coast. Eight men stood neck deep in the tossing surf, holding the nose of the vessel steady. Beyond the breakers they jumped aboard, sitting four to each side on the pontoons. The skipper lowered the twin eighty-five horse power engines into the water and whipped them out to sea.

Shuhood clung to the ropes, spray stinging his cheeks. The wind was picking up, rocking them as they advanced into Table Bay. ‘There was an air of camaraderie on board because Robben Island lay in our sights and I was told we were going to make some very serious money,’ Shuhood wrote.

As they drew nearer the divers began suiting up. The skipper cut the engines and told the men to extinguish their cigarettes. In silence they drifted past the jetty towards the deserted eastern shores. The lighthouse spun on the island’s far shore. There were lights on in some of the small houses where the rangers lived. Shuhood saw the glowing taillights of a car move through the night.

Further on, where the lights receded, the divers pulled on their masks, strapped on waterproof headlamps, and one by one flipped backwards into the black water.

‘Having never attempted this,’ Shuhood wrote, ‘and not to be outdone, I also tried.’ He inflated his BC and tumbled over, misjudging the rotation and slamming his head on the hull. Underwater it was frigid and impossible to see anything; then he switched on his lamp and the reef was bleached by pale light. The first thing he noticed was the abalone, crammed in every direction he pointed his torch.

Cutting through the kelp around him, he then saw dozens upon dozens of sharks.

They were reef sharks, some close to two metres long. Shuhood hit the inflate button and rose back to the surface, spinning in search of the boat. ‘Turn-off-your-fucking-torch,’ someone hissed from a few feet away. Shuhood swam across, hauling himself onto the deck with his rig and weight belt—a performance he has never managed to repeat.

‘And now?’ the skipper asked, waiting for him catch his breath. ‘There’s fucking sharks down there!’ Shuhood said. ‘Sharks everywhere!’

The skipper laid into him, keeping his voice low: What about the other divers? Were the sharks scaring them? Fucking maybe Shuhood should get a nine-to-five and leave space for men who wanted to work.

‘If you got such a big bek why aren’t you getting in the water?’ said Shuhood to the skipper, a middle-aged coloured man. (‘One of those old-school gangsters, I think a 28,’ he told me.) Secretly, though, he began doubting himself. ‘I sat there like an idiot,’ he wrote later. ‘Did I really want to do this?’

He expected further embarrassment when the divers surfaced, but the first to arrive was Malcolm, one of the divers he knew from Hangberg. He emptied his pouch and swapped his cylinder for a spare, preparing to go under again.

‘How’d it go?’ he asked Shuhood. Before he could answer, the skipper cut in: ‘Man’s afraid of a few sharks.’

Malcom looked at Shuhood, shivering in his wetsuit. ‘No,’ he said. ‘You’re getting back in with me.’

Usually the divers shucked their fish underwater, Malcom told Shuhood as he rigged up again, but they would not do that tonight—the sharks were in hunting mode, moving in quick bursts with their fins lowered. They weren’t man-eaters but could get mean, he warned. Stab one and the other sharks would devour it, before turning on the divers ‘as the main course’.

Shuhood did not know if this was true, but trusted Malcom, who was the more experienced hand. The skipper was watching. Other divers were coming up with their bags. Pushing back his fear, he followed Malcom over the side.

‘I just tried to keep my mind on the perlies that were bigger than soccer balls, and I took some massive crayfish,’ Shuhood wrote. ‘Now and then one of the sharks would come straight towards us and in an instant turn away with just the tail brushing my face.’

Malcom was beside him, popping loose abalone and loading his pouch. Back beside the rubber duck, they handed their bags to the bootsman.

Shuhood would dive with sharks many more times in his life, getting used to their presence, but never saw them again at Robben Island. In his memory their appearance on his first night-dive has acquired the significance of a rite of passage.

‘You feel a sense of accomplishment: it’s not everybody who can do this,’ he told me. ‘Everybody is a bit scared of sharks, but are you gonna let your fear overpower you?’

When all the men were on board, the skipper raised anchor and raced towards Hout Bay, stopping in deep water beyond the island to allow the divers to shuck their catch. The bootsman had marked their bags with colourful strips of cloth to tell them apart. They opened the bags and began working. Gouge, lever, twist. Shuhood’s wrists began to ache. Gouge, lever, twist. Abalone slime dribbled across the deck and fish rose to tear at the discarded guts.

Cape Town was a string of lights above the water, the Mouille Point lighthouse flashing. The other divers were shucking much more quickly, their forearms stronger from years of practise. Gouge, lever, twist. Eventually Shuhood asked the bootsman, for a small fee, to help finish the job.

He went home with R8,000 cash that night, less than the other men but by far the most he had earned in a single dive. More than anything else, he was proud that he had returned to the water. He paid the boat owner his fee—ten kilos of fish, worth another R3,500—and apologised to the skipper, ensuring that he would be able to work with them again.

In Hangberg the divers were not allowed into the room where their abalone was weighed. Instead they had to trust that their pay-out was accurate. They were dealing with a new network of buyers, ruthless men connected to gangsters from the Cape Flats. It was better, Shuhood knew, not to ask too many questions.

The buyers subtracted ten per cent from the weight to compensate for slime that would still ooze for several hours. It was important to act fast, and everybody was tense. The fish had to be stored and driven out of Hout Bay before the cops arrived or the flesh, still tender, began to spoil.

Finally, a book that reveals the inner workings of a murky underworld market we know alarmingly little about … a first-hand account from an insider.
—Mandy Wiener

Riveting, insightful and beautifully told. A deep dive into a hidden underworld revealing the very human face of poaching as no other book has.
—Julian Rademeyer

Locked up for poaching abalone, Shuhood Abader began writing his life story. For over fifteen years, he had been a small cog in a criminal industry stretching from the Cape underworld to China’s luxury seafood market. As abalone—perlemoen, perly—vanishes from the South African coast, Shuhood’s first-person account takes us right into the heart of the crisis.

Kimon de Greef’s postgraduate research on poaching led him into journalism, and today he is the pre-eminent local expert on the illicit abalone trade. He contextualises Abader’s raw, immediate tale by showing how the system works: from desperate fishing communities via gang strongholds on the Cape Flats, tik, guns and police complicity to the harbours of Morocco and Hong Kong.

Journey with the authors through death-defying dives, blackmail, robbery, shark encounters, near-drownings, and chases by police and rivals.

Poacher tells the story of a deadly black market; but it is also the story of one man, deeply conflicted, committed to his faith and searching for a better way.

Shuhood Abader is a pseudonym. The names of his family members, former poaching accomplices and other figures from his past have also been changed.

One thought on “‘Man’s afraid of a few sharks’—Read an excerpt from Poacher: Confessions From the Abalone Underworld by Kimon de Greef and Shuhood Abader”