Lisa Halliday’s debut Asymmetry is a genuinely surprising novel, which invites us to question how men and women are rendered in fiction, writes Wamuwi Mbao. 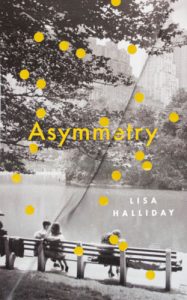 Few nations so anxiously desire to memorialise their present-day happenings as America does. The country’s relentless, Moloch-like hunger for new authors who might better explain America to itself cannot but affect the literature that emerges from it. Not all of it, mind you, but a great deal of it, certainly, reads like balm for the TED Talk generation.

Lisa Halliday’s Asymmetry bears the marks of its forge. It is an American novel; it is written in the American voice. This narrative tone is ironic, measured and knowledgeable (leading to the critical epithets ‘dazzling’, ‘startling’, ‘mesmerising’, now shiny with overuse). It observes bright things about the everyday in a bored sort of way. If American novels spoke, they’d sound like Ira Glass.

Accordingly, Asymmetry has occasioned a raft of articles that name it as a literary phenomenon. What this means, simply if surprisingly, is that some people, many of them in the sort of faux-proximity that social media creates, are reading the novel. They are posting snapshots on Instagram, sharing quotations on Twitter, and generally doing much to deter those for whom fashion is anathema. Much of this has to do with the novel’s subject matter: twenty-something-year-old woman falls into relationship with older-man artist. In an era where we’re looking at all those old Woody Allen films with a new sense of horror, this might be rather salacious material, never mind the inferences that the story might be based on Halliday’s relationship with Philip Roth.

But that shouldn’t distract from the novel itself, which is a genuinely surprising work of fiction. It is surprising because it seems so cut-and-dried in how the story plays out, and how it will end. We see Alice, the reticent ingénue, who meets Ezra Blazer, acclaimed author, in a park. They strike up a conversation, him affable, her intrigued. We see him offering to pay off her student loans. We see her picking up his medicines and the other accoutrement of his dotage and we think, this is all very nice and well, but he’s going to die at some point, isn’t he?

The part of the novel in which the relationship between Alice and Ezra ripens invites the reader to think through what it means to be in love with someone when that someone is in the winter of their life. How Halliday handles this is interesting, if one compares Asymmetry to novels like Roth’s The Dying Animal or JM Coetzee’s Diary of a Bad Year. Both of those novels are written by men, with a man’s perspective on how the ageing (male) self must look to a woman in the insert metaphor suggesting pre-spoilage of her youth. Both of these novels invite us to shudder at age, at its indignities, its smells and its creaking self-awareness. In Asymmetry, Alice is doing the looking, rather than being looked at, and we see at once that what causes her anxiety is not the ageing male body, but what Ezra’s approaching infirmity signals about their remaining time together.

It is just as we are wondering when the relationship will reach its terminus that we suddenly plunge down the rabbit hole into a completely different story, with a different set of characters doing completely different things. Spoiler alert: the second act is tragic. This new narrative concerns Amar, an Iraqi-American economist, who is detained at Heathrow while en route to Kurdistan to visit his brother. Here too, we expect the conventions that have become stock and fodder for a raft of short films, including a ‘Kafkaesque’ (surely the most overused description of our current moment of discontent) questioning in a stark room, and endless waiting. Amar tells us his story in the first person, and his memories of childhood and his interpersonal relationships, which interleave his interminable detention, draw us closer to him.

The narrative flashes between the present time, in which Amar sits detained by airport security for reasons that are ominously inscrutable, and his past visits to a Baghdad that is first peaceful, then gripped by the devastations of war, then in an uneasy state of liberation. We inhabit the dismaying, incomprehensible nature of the War on Terror. I kept returning to one passage in particular, where Amar and his family receive a visit from a family acquaintance:

Like most conversations, this one had its lulls, and each time there was a lull our visitor would attempt to dispel it by saying: this will pass eventually. It was like a nervous tic, repeated maybe half a dozen times in our presence: This will pass eventually. At one point after saying it the man looked up and caught the doubtful expression on my face. I mean, he said, it’s not as though things can continue like this forever, right?

The man’s fatal hope that things will not get worse, what Amar characterises as ‘the vaguely morbid notion that things couldn’t possibly go on so very awfully indefinitely’, fills us with foreboding. Who is to say that what has gone before will be the very worst of what we experience? The writing in this section of Asymmetry is richly attentive to all that is particular about human experience, and yet it keeps an unspoken reserve in place. We wonder how Amar can sit so patiently as he is deprived of his freedom, only to discover that his store of patience arises precisely from the knowledge that things can be so much worse than what they are.

Where Alice seems billowingly distant from us—where her interiority not ours to observe—Amar’s life is close enough to feel vivid and particular in a way that draws us in. What does this say about how men and women are rendered in fiction? This is one of the questions the novel invites us to think through. The two stories are juxtaposed and call to mind different kinds of asymmetrical relationships. Is Alice’s story less serious than Amar’s? Why might we inhabit the one more closely than the other? The novel plays upon our prejudices, luring us into reading the first section as a light comedy, the unexceptional first work of a debut novelist. Then, the second story: so very serious, so plangent in its pacing back and forth between the past and the present, finally delivering its short coda, which exhales us onto a beach of unknowing.

The writing in Asymmetry is quite lovely. Ezra Blazer sounds like Henry Miller with a Telly Savalas filter on. He speaks in pithy always-jokes that carry in their rhythm echoes of Saul Bellow and (of course) Roth. He is, as he describes himself, ‘the soul of decrepitude’. He is as comfortable in the city eating hot dogs as he is in the genteel neo-pastoral Long Island home he retreats to in order to escape the ‘fatal froth and frenzy’ of literary life in Manhattan. Novels about writers can often feel like one long in-joke, but Halliday portrays Ezra as a figure with human depth, and deeply flawed humanity.

As for Alice, she is clearly fascinated by Ezra, by how his life is structured and by what it allows. Driving up Sunset Beach together, she takes in the view:

From here, you could see all the way across the water to the North Fork, where the train from the city came to its slow, inexorable halt—its tracks ending abruptly, surrounded on three sides by grass, as though the men whose job it was to lay them down a century and a half earlier had looked up one day and saw they could go no farther: a bay lay in their way. It gave the land beyond it a wilder feel, uncharted and unreachable by the steel veins of the metropolis –whose relentless intensity had lately seemed increasingly at odds with Alice’s dream of a more contemplative life. A life of seeing, really seeing the world, and of having something novel to say about the view.

If that passage has something of Nick Carraway in it, it is because of the joy of Alice’s noticing, which leans on metaphor but doesn’t release us completely from imagining for ourselves how Alice might feel with all this possibility laid out before her. Alice’s struggle is with the anxiety of the fledgling writer who wonders if she will have what it takes to confront the bigger themes. Her closeness to The Great Author only heightens her worry: how do Yiddish jokes and caramel-walnut candy and pills combine to produce the genius work?

Make no mistake: this is the modern novel du jour, in which storylines proliferate and nerdy baseball commentary jostles with Edward Said’s On Late Style. But the way in which Asymmetry places its different narratives up against one another is what elevates it. Read in close proximity to a novel like Mohsin Hamid’s Exit West, it feels like a similarly compelling inquiry into how we might imagine the lives of others. Asymmetry is utterly mysterious, and utterly worthy of our attention.