The award is voted for by South African booksellers, and goes to the local book that they ‘most enjoyed selling or that sold so well that it made a difference to the bottom line of booksellers across the country’. 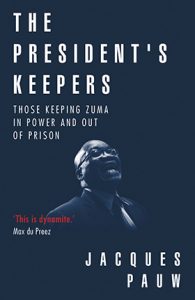 The President’s Keepers was shortlisted alongside 90 Rules For Entrepreneurs by Marnus Broodryk, Redi Tlhabi’s Khwezi: The Remarkable Story of Fezekile Ntsukela Kuzwayo, Thandeka Gqubule’s No Longer Whispering To Power: The Story of Thuli Madonsela and the 40th anniversary edition of Steve Biko’s I Write What I Like.

Last year’s winner was Trevor Noah, for his autobiography Born A Crime and Other Stories.

In his acceptance speech, Pauw said he believes it was the State Security Agency’s attempt to ban the book that made it the bestseller it is.

‘They never learnt from apartheid, did they?’ he said. ‘As soon as you tell people not to do something or not to look at something, or not to read something, that’s exactly what they want to do.

Pauw thanked South African booksellers for continuing to sell the book despite the controversy and threats of legal action.

We couldn’t do any publicity for The President’s Keepers because we knew that the state was going to try and stop us. So we couldn’t do any publicity for the book. But a month or two or three before the book was published I had lunch in Riebeek-Kasteel in the Western Cape with Benjamin Trisk, who was then the CEO of Exclusive Books. And I explained the book to Benjamin and he listened to me for a long time and he said to me, ‘This might be the most important book since 1994. And therefore, you don’t worry, you just write it. I will sell it for you.’

And I remember the book was published on the 29 October last year on a Sunday morning, and we chose a Sunday morning because we knew that the protagonists would be in church or having a braai or whatever, and very early that Sunday morning as Exclusive Books opened its doors, there was The President’s Keepers, it was everywhere. Because we knew that if we could keep this book on the shelf, for two or three days, the state would not be able to stop the book. There’s a legal term for it, lawyers call it ‘the horse has bolted’.

And then the poor sods at State Security wrote a letter to a man called Russell Martin, who was the editor of the book. You know when you open a book there’s a page with all the credits, who did the front cover and the proofreading and whatever? And Russell Martin is a 70-year-old, retired publisher. He did the editing of the book. So this bright spark at state security looked at the book and he saw there ‘edited by’ and he thought, ah, this works like a newspaper, there’s the bastard who caused all the problems. And he wrote a similar letter to Russell Martin. And the poor man nearly had a heart attack when he got this letter.

I have to say, throughout all of this I had a brilliant publicist. But my God, can you imagine that you’re an author, who writes about the dirty washing of the president, and your main publicist is the directory general of State Security. And your other publicist is the commissioner of Sars. And these two buffoons together decide that they’re, number one, going to try and ban the book, and number two, they’re going to institute criminal charges against you. They never learnt from apartheid, did they, that as soon as you tell people not to do something or not to look at something, or not to read something, that’s exactly what they want to do.

So when Mr Fraser and Mr Moyane [former State Security Agency director general Arthur Fraser and SARS commissioner Tom Moyane] instituted criminal charges against me—and there’s still criminal charges against me—and they tried to ban the book, this book exploded. I think we initially printed 20 000 books. It sold out within a day or two. And then you had the PDF copy and apparently if you put into Google ‘Jacob Zuma book’ you can still get a PDF copy. But anyway, it was during that time that the book was sold out, and that The President’s Keepers became an international bestseller in ebooks. I remember that Saturday I was sitting on the stoep of my restaurant in Riebeek-Kasteel, and I got an email from publisher Gill Moodie, who said to me, you’ve just moved from number seven to six on the worldwide list of all books. You just passed John Grisham.