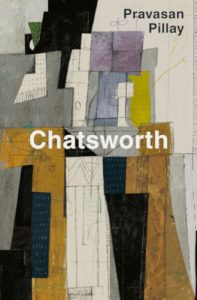 As a South African Indian, it is not easy for me to find writing that is descriptive of my cultural heritage. This is what I have experienced from the time I could read. The poets, the novelists, the short story writers and the playwrights scattered among the 2.5 percent of South Africans of sub-continental descent who identify as ‘Indian’ are scarcely represented in our national literature. I am continually seeking out depictions of the complex, rich culture I come from. Sometimes, I find a poem in an online magazine. Other times, it is a short story in a print journal. But discoveries like this do not happen as often as I would like.

Then, I find a copy of Chatsworth by Pravasan Pillay, a book that takes its title from the name of the former Indian township, now suburb, that lies southeast of Durban—a city famously known for having the largest urban Indian population outside of India itself. After the Group Areas Act of 1950, many Durban Indian families were forcibly moved to Chatsworth (as well as a few other designated areas). Part of my family still live there today, amid a complicated mix of different Indian cultures, including Hindi, Tamil, Telugu, Christian, Muslim, and more.

The eleven short stories in Pillay’s book take place in Chatsworth during shifting time periods, ranging from the late nineteen-eighties onwards, and have a slice-of-life quality that illustrates everyday, working-class Indian Durban. Here are vivid representations of my culture, my family and, more particularly, the distinct way we speak English. This verbal stylisation is present in the very first story, ‘Mr Essop’, where the speaker’s father says, ‘You meet anyone first time, they act nice in front of you, but, must see, two months later, they don’t want to pay their rent.’ Although the English itself is familiar, the pattern of speech is unique. Elsewhere in the book, words and phrases like ‘ballie’, ‘shell-shock’, ‘graft’, ‘ace ball’ and ‘tune’ appear as part of characters’ everyday speech, but it is primarily through his ‘Indian English’ phrasing that Pillay captures not only the dialect but the Chatsworth accent itself, a praiseworthy and significant feat. I have not seen another contemporary work of fiction that pulls this off.

Pillay has published two chapbooks of poetry, Glumlazi (2009) and 30 Poems (2015), as well as a collection of co-written comedic short stories, Shaggy (2013). Chatsworth is his debut solo collection, and the stories all hold a quality of shy intimacy as they share aspects of different peoples’ lives. ‘Mr Essop’ is told from the perspective of a young boy, who invites the reader to listen to his traumatic tale of a punishment gone wrong. It hit home for me, as it contains a reference to what was certainly the main disciplinary tool of choice for many Indian parents, including my own: green chillies, which are rubbed in your mouth as a punishment for moderate to severe wrongdoing. In the story the harshness of this punishment becomes vividly clear, as the young boy is made to eat fifteen green chillies.

Throughout the collection, Pillay offers classic moments like this that many people will recognise from a typical Durban Indian childhood. In ‘Green Apples’, twelve-year-old Pinky is afflicted by terrible boredom, unable to shake off longing for simpler, younger days: ‘Everything is the same … like if you have a bath or play snakes and ladders or eat or anything. It’s all like one thing’, she complains to herself. ‘Pinky’ may seem a strange name for a young Indian girl, yet it is a common and recognisable nickname in Chatsworth. (I myself have a distant relative whom I know only as ‘Porkie’.) Pinky mentions that her childhood nickname was ‘Apple’, as she once threw an unripe apple through a window and broke her mother’s vases, and we circle back to punishment: Durban Indian culture is patriarchal, and Pinky is punished by her father, who makes her eat the same unripe apple she threw. As she approaches puberty (dare I say, ‘ripens’), her old nickname falls out of use, but Pinky rebels against coercion into the adult world. For Durban Indian girls, puberty marks a stark erasure of childhood: it is expected that they start behaving like ‘proper young ladies’. But, as we see, Pinky sneaks around the house at night, making condensed milk sandwiches and smoking.

From the territory of preteen rebellion we are led into that of the outright taboo: ‘Girls’ and ‘Chops Chutney’ are taken up with pre-marriage romance, affairs of the heart that many Indian teenagers and young adults go to great lengths to hide. Arti, one of the characters in ‘Girls’, wants to bleach her upper lip hair and wear nail polish before meeting a boy who has written her a love letter, but has to hide all of this from her parents, along with the Mariah Carey song she has secretly taped into a prayer music compilation. Kavitha, in ‘Chops Chutney’, must ask her father’s permission to go out with her boyfriend on the weekend, even though she is well out of high school. She works but still lives with her parents, a common reality for many young South African Indians. Moving to your own flat as a young adult is unheard of, unless you are moving to another province (or country) for work or study. The first move that many Durban Indian girls often make is from their parents’ house to their husband’s.

If men make—and enforce—the rules in Chatsworth, women do the lower-deck work, keeping the flotilla of families afloat. ‘Crooks’ provides a stark look at a mother–daughter relationship, in which Kamla, a widow for fifteen years, lives with her daughter and makes ends meet by selling basic household necessities, as well as alcohol, from her home. Selling alcohol is illegal, but tuckshops like Kamla’s are institutions in Chatsworth, as many people cannot make it to a shopping centre for everyday supplies. Kamla’s daughter, Ambi, is obese, quiet and never leaves the house. Her mother has slowly come to do everything for her, from bathing her to cooking to keeping the tuckshop running. Ambi does not have any redeeming qualities, from her mother’s point of view, but it seems to Kamla that it is her duty to care for her youngest daughter as well as she can, until she dies. ‘Crooks’ is a gut-wrenching story: every mother–daughter relationship is different, but a critical mother who enables her daughter’s self-destructive behaviour is unfortunately not uncommon among families in the Durban Indian community.

The central characters in ‘Under A Yellow Marquee’, meanwhile, provide insight into the uneasiness many Durban Indians feel about leaving their communities—and coming back to them. Denver and a schoolmate return to their childhood community for a funeral: Denver from Phoenix (another former Durban Indian township), and the schoolmate from Umhlanga (an upper class suburb north of Durban). Both characters have followed their own paths, and Denver’s mother complains about his ‘new’ way of life, and guilt-trips him into visiting her. She and the other older women in the story are open about their disapproval of Denver’s schoolmate’s husband’s behaviour, as he sits in his Mercedes-Benz and does not come in or greet anyone. He probably does not want to associate with ‘us poor people’, they remark, and the gossip continues, amplifying Denver’s general sense of unease.

In ‘Green Ghost’ we leap from the everyday to the supernatural: the superstitions, or at least suspicions, of the Chatsworth community are channeled via the character of Gona Naidoo, who claims to have seen a green ghost in the extra rooms of his parents’ house. (Here Pillay will delight readers familiar with Chatsworth with his mention of the addictive toasted cheese sandwiches from the famous Kara Nichha’s.) The Durban Indian community is well-versed in the supernatural: tales of ghostly visits, demonic possessions and the urban legend of Highway Sheila (Google this, dear reader!) are commonplace. But in Chatsworth, second-hand stories, supernatural or not, change hands fast, and some survive, others do not. As we reach the end of this story, it seems that the green ghost will not.

‘Green Ghost’ illustrates how Pillay, throughout his collection, is less concerned with catharsis, and more with bringing Chatsworth and its people to life in a way that, while artful, remains realistic. He dispels the idea that there is any kind of homogeneity in the community, sprinkling his stories with minor characters who do much to deepen their flavour. The samoosa-selling boy in ‘The Bends’; the inactive young Muslim man in ‘Idris’; the schoolgirl asking to buy marijuana from a man who will not sell to girls in ‘The Fence’; the gossipy high school teachers in the heartbreaking story ‘The Albino’; the Pakistani immigrant who is unperturbed by his girlfriend’s xenophobic father in ‘Chops Chutney’—these all contribute to the sense of the community’s deep and textured foundations.

The Chatsworth of Chatsworth is a place where paradox lives and breathes, and this makes the short story collection a literary necessity: to me, but hopefully also to readers wishing to diversify their perceptions of the South African Indian community. Or simply for those wishing to read something different about South Africa.