‘Johannesburg is a fragmented city. It is not a place of smoothly integrated parts. And it has a name that does not roll easily off the tongue.’ —David Goldblatt, TJ

The cover image for the July 2018 issue of The JRB is excerpted from his solo exhibition and accompanying book TJ, published in 2011 by Umuzi. 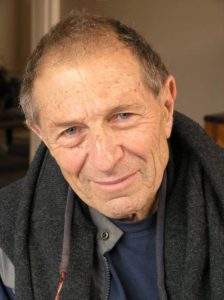 The legendary documentary photographer succumbed to cancer on Monday, 25 June 2018, at the age of eighty-seven.

Goldblatt had been a full-time photographer since 1963, known for his acute observations of the conditions and values of South African society.

In 2010, TJ, his authoritative collection of six decades of Johannesburg photographs, was published in a boxed set as a collectors’ edition with  Ivan Vladislavić’s novel Double Negative, as a unique pictorial history of the city.

During his career, Goldblatt held exhibitions all over the world, most recently a retrospective at the Pompidou Centre in Paris in 2018. He received honorary doctorates from the universities of Cape Town and Wits, and won the Camera Austria Prize (1995), the Arles Book Prize (2004), the Hasselblad Award (2006) and the Henri Cartier-Bresson Award (2009).

Almost all of Goldblatt’s photographs have different layers of interpretation through which the viewers, according to their experience and previous knowledge, unravel a tale. Indeed, behind each one of Goldblatt’s images there are several stories, most of them related to vital questions, which affect in a direct or tangential way the values by which the country moved and moves. Throughout his career, Goldblatt has been searching for a photograph that would discover, probe, reveal or clarify some of these values.

His work lives on.

View an excerpt from TJ: