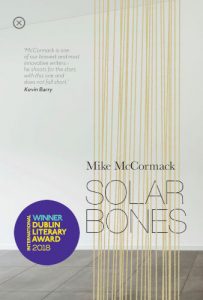 The 270-page novel is written in a single sentence, and spans a single day: All Souls’ Day, when it is said in Ireland that the dead may return.

Solar Bones, McCormack’s fifth novel, was turned down by major publishers for being too experimental and uncommercial, and eventually published by Tramp Press, an independent Irish publisher founded by Sarah Davis-Goff and Lisa Coen. It won the the 2016 Goldsmiths Prize and was named 2016 Novel of the Year at the Irish Book Awards.

The International Dublin Literary Award, worth €100,000 (about R1,470,000), is the world’s most valuable annual literary prize for a single work of fiction published in English. Nominations for the award are submitted by over four hundred library systems in major cities throughout the world, including Nigeria and South Africa.

The winning novel was chosen from a total of 150 titles, nominated by libraries in 111 cities across thirty-seven countries. Six African authors were longlisted for the award, and The JRB Editorial Advisory Panel member Yewande Omotoso was shortlisted for her novel The Woman Next Door.

‘I am delighted to receive this unique prize which continues to recognise the valuable work of libraries around the world,’ McCormack said. ‘To have Solar Bones chosen from a shortlist with such a broad international outlook is a special honour indeed.

‘I have always thought that the inclusion of translated work is a particularly valuable aspect of the International Dublin Literary Award; these different voices and the diverse ways in which they tell their stories ensures that the novel in English does not become dull or complacent. Long may the prize continue to reach out with such intellectual and artistic curiosity across the world.’

Groarke said: ‘Formally ambitious, stylistically dauntless and linguistically spirited, Solar Bones is a novel of extraordinary assurance and scope. That its protagonist, Marcus Conway, is dead we know from the back cover blurb: the novel’s task is, through the miracle of language, to bring him back to life. And so it does, bringing him back to his life, a life experienced as both ordinary (in its daily routines) and extraordinary (in its probing of what it means to be alive).

‘The novel’s seamless structure gives it a beautifully fluid pace. An extremely enjoyable read, it is also poignant, moving and evocative. Although firmly committed to its particular Mayo setting, this is a novel of universal appeal: if you know Ireland, you will recognise this world; but if you don’t, you will still recognise Marcus Conway, a rich and (literally!) haunting character who brings a whole world to life.’

Once a year, on All Souls’ Day, it is said in Ireland that the dead may return. Solar Bones is the story of one such visit. Marcus Conway, a middle-aged engineer, turns up one afternoon at his kitchen table and considers the events that took him away and then brought him home again. Funny and strange, McCormack’s ambitious and other-worldly novel plays with form and defies convention. This profound new work is by one of Ireland’s most important contemporary novelists. A beautiful and haunting elegy, this story of order and chaos, love and loss captures how minor decisions ripple into waves and test our integrity every day.

Angolan author José Eduardo Agualusa won last year’s International Dublin Literary Award for his novel A General Theory of Oblivion. Agualusa became the second African author to win the prize in its twenty-two-year history, the other being Moroccan author Tahar Ben Jelloun, who won the award for his novel Cette aveuglante absence de lumière (This Blinding Absence of Light) in 2004.