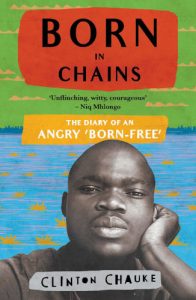 Born in Chains chronicles Clinton Chauke’s life from his birth in 1994, at Kalafong Hospital in Pretoria, until early 2018, when Cyril Ramaphosa came to power as democratic South Africa’s fifth President. Despite the year he was born, Chauke flatly denies that he is born free—‘born free’ being the nickname given to South Africans for whom life began after the birth of democracy. In his Introduction, Chauke writes: ‘the central message of this book is to reject the born free label, which many love to romanticise, forgetting its implications’.

Chauke’s early life experiences are largely urban, in places such as Saulsville, Atteridgeville and Mshongo informal settlement in Pretoria, where he lives and goes to school. When his parents briefly separate in 2000, the setting shifts from urban to rural: Chauke, his mother and his sisters go to live with his maternal grandmother in the village of Shirley, near Elim in Limpopo Province. The following year his parents reconcile, and Chauke and his sisters go to stay with his paternal grandmother in Bevhula village in Ntlhaveni, Malamulele, also in Limpopo. One night their hut burns down, leaving them without shelter, an incident that prompts Chauke’s mother to take her children back to Pretoria, where they settle in Mshongo again. Chauke then takes us through his family’s story until he matriculates from high school and gains a place at the University of Johannesburg.

Chauke’s is a humorous, fast-paced, witty and courageous tale of family relations, displacement, religion, culture, education, forced internal migration and ethnic stereotyping. The blight of poverty dominates everywhere in the book, but Chauke’s sense of humour ensures that it remains an uplifting read. When discussing the stereotype that Tsonga people are especially dark, for example, the author relates that while he was at Saulridge Secondary School in Atteridgeville, he was often a laughing stock, made to feel inferior because of his complexion—but then shares an amusing anecdote about how he used to steal his sister’s Pond’s cream, applying it to his face to lighten his skin. On many occasions I found myself laughing at something that I thought I should find serious.

Chauke’s denial that he is a ‘born free’ is persuasive and justified, meanwhile. He makes the sound argument that young, black South Africans like him may have been born politically free, but they are still fighting for economic freedom. Because it marked the dawn of our new democracy, the year 1994 is misconstrued as the marker of the end of apartheid, racism and even inequality. Unfortunately, South Africa remains one of the most unequal countries in the world. As Chauke points out, his story is not unique. There are many people like him who still live in ‘a windowless one-roomed shack of scrap wooden planks; asbestos plates with aluminium roofing and a carpet floor’.

Poverty is the equivalent of prison for Chauke, who writes: ‘I found a direct link between poverty and this situation. It was the same reason I called a shack my home; somewhere deep in my soul I knew that there was no difference between me and those prisoners. We were just locked in different prisons’. At the same time as he laments his situation in an urban slum, Chauke is careful not to romanticise rural life, unlike other books that I’ve read recently. He talks about the dangers rural people encounter, such as floods, fires, and even wild animals like lions, baboons and elephants. The chains of poverty are heavy, no matter where you live.

The two worlds of Christianity and African belief systems also feature prominently in the book. Chauke takes the reader back to the time when he used to attend the Zion Christian Church with his mother and sister in Atteridgeville. He is of the view that the ZCC combines African traditional values and the Christian faith. However, in 2010 he is baptised into a different church, His Rest, where he finds solace from the teenage temptations of drugs and alcohol. He is very critical of the racism and inequality he sees within white churches and black churches. For example, he says, ‘coming back to His Rest, I felt like our God was very small. The God of Hatfield Church was the God of white people. It was a prosperous God. The God of His Rest was the God of black people. It was a poor God, but a very funny one’.

Born in Chains reminds me of Malaika wa Azania’s Memoirs of a Born Free: Reflections on the Rainbow Nation, which was published four years ago (Jacana Media, 2014). In her book, Wa Azania details her disillusionment with the concept of the ‘Rainbow Nation’. Wa Azania was published at the age of twenty-two, and Chauke at twenty-three. Both authors question the idea of being ‘born free’ by challenging dominant national discourses, and both encourage other young people to participate in these debates—indeed to change them. Both of their books are also critical of South Africa’s education system and the slow pace of the ANC’s economic reforms. Chauke goes a step further, examining South Africa’s xenophobic or Afrophobic violence, as well as the Fees Must Fall movement.

Chauke’s book is representative not just of his generation of South Africans, but also of those who, like me, have lived both rural and urban lives. Born in Chains sparked some very powerful memories for me, as I also completed my education at a poor rural school in Limpopo. Through Chauke’s book, I am able to compare the standard of education and living that I experienced during the apartheid era with the post-1994 democratic period—and find that not enough has changed. Chauke must be applauded for documenting his era, still unfolding in South Africa’s history, in a way that, blending the personal with the bravely political, few of his peers have had the courage to do.