Olúmìdé Pópóọlá’s debut novel, When We Speak of Nothing, seems to indicate a blossoming of things to come, writes Outlwile Tsipane. 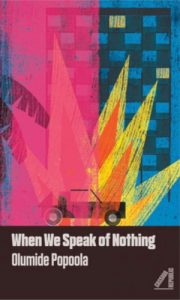 When We Speak of Nothing
Olumide Popoola
Cassava Republic Press, 2017

What becomes of stories that are not told during their time? Do they eventually emerge, and can they encapsulate their own time if they do?

In an interview in 2013, Alice Walker said she wrote The Color Purple because the stories of the people she knew and loved were not being told. ‘If you deny people their own voice, you’ll have no idea who they were,’ she said. This quotation epitomises London-based Nigerian-German writer Olúmìdé Pópóọlá’s debut novel, When We Speak of Nothing.

It is evident from the first page of When We Speak of Nothing that Pópóọlá is unperturbed by the precepts that govern conformity in writing. Her prose is bold and brave, and her sincerity is evident in the brevity of her phrases and words. Pópóọlá adopts the voices of London, Port Harcourt and, in part, Lagos, with a tinge of youthful exuberance throughout. In telling this story of familial squabbles—some silent, others forceful—the testing tribulations of friendships, and how to navigate racial bigotry, homophobia, culture and love, Pópóọlá seems to be making a parallel call that all inhibitions be dispensed with, the prize of this being that people tell their own stories.

To an eye accustomed to more conventional reads, Pópóọlá’s colloquial approach may not be that easy to follow at first, but the manner in which she suspends and weaves together the different tales is the necessary warm-up that eventually enables one to appreciate the refreshing and superb work-out that is the novel as a whole. The idiomatic language could have led to misplaced or unintended humour, but Pópóọlá maintains the decorum necessary to do these important stories, and their accompanying serious themes, justice.

The novel introduces us to Karl and Abu, best friends and residents of a racially tense London. The pair are nearing their eighteenth birthdays, and grappling with the happenings of everyday life in their often unfriendly city, where you have to carve out your own happiness. Being accosted by gangs and seeing situations turn ugly are norms they frequently contend with, sometimes unsuccessfully so.

The relationship between the friends, as well as their families, changes drastically when Karl discovers that his mother, Rebecca, has been concealing information about his father. With the help of his uncle and legal guardian Godfrey, Karl arranges to go to Nigeria to meet the father he has never known.

Karl’s relationship with his mother has never been cozy. A single mother, Rebecca is forced to wrestle with the intricacies of raising a teenage boy in an unforgiving city. Their communication is routine and stifled. Rebecca suffers from multiple sclerosis and often falls into bouts of depression, which compounds her illness, making her a regular hospital visitor. Their troubled relationship, in which many things have been left unsaid over the years, means that Karl cannot bring himself to tell his mother of his impending mission—nor even his discovery of the information about his father—and only shares snippets and half-truths about his whereabouts to keep her motherly nose at bay.

Karl’s journey to his father’s native country does not, however, result in the reunion he expected. Their eventual encounter is brief, taut and unpleasant, his father refusing to accept that Karl sees himself as transgender. ‘I think it’s best for you to return to London straight away,’ his father says dismissively, concluding a meeting that took a great deal of effort to arrange.

But the trip itself proves not to be a futile exercise, yielding as it does new connections of friendship and love in Port Harcourt, as Karl befriends Nakale, an environmental activist concerned with the Niger Delta, and falls in love with his cousin Janoma.

When We Speak of Nothing juxtaposes the social ills of racism and homophobia that plague Abu’s London with the unethical business practices afflicting the community of oil-rich Port Harcourt, which Karl comes to learn about from Nakale. The novel’s multiple and layered themes of gentrification, cultural ignorance, and class and racial differences are interwoven with care, ensuring that their essence is not lost, and all the while Pópóọlá provides necessary impetus and pace to the narrative.

Pópóọlá takes care not to create an Africa of abject poverty, as happens all too often in fiction, but equally doesn’t shy away from asserting that it has its share of problems. In a dialogue between Karl, Nakale and Janoma, Pópóọlá introduces the environment activism of Ken Saro-Wiwa and his contemporaries in Ogoniland in the Niger Delta, and his death by execution when General Sani Abacha flexed his iron fist in Nigeria in the mid-nineties. By showcasing Nakale’s activism, which is of a not too dissimilar nature, Pópóọlá seems to imply that, at its core, the situation in the Niger Delta is essentially the same as it was decades ago.

In her previous work—which includes a novella, this is not about sadness (2010); a play, ‘Also by Mail’ (2013); and a collection of stories, with Annie Holmes, on Europe’s refugee crisis, breach (2016)—Pópóọlá has often dealt with migration and displacement, and what comes to the fore in When We Speak of Nothing is her belief in humanity—that ordinary folk can prevail despite the heavily stacked odds against them.

What initially seemed like a brazen act of effrontery on the part of Karl—to leave London and travel to Nigeria, testing the resolve of his relationships—concludes with a sense of fulfillment. His quest feels justified, a victorious coming-of age feat, in which he ultimately gains more than he loses. When We Speak of Nothing may not be a new story, but the manner in which it is told is new. The novel is deeply encouraging, and seems to indicate a blossoming, of sorts, of things to come.

One thought on “A victorious coming-of age novel: Outlwile Tsipane reviews Olumide Popoola’s superb debut, When We Speak of Nothing”