Award-winning author Imraan Coovadia chats to The JRB Editor Jennifer Malec about his new novel, A Spy in Time. 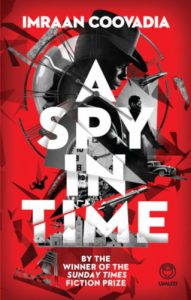 Jennifer Malec for The JRB: You’re known as one of South Africa’s finest essayists, but your fiction writing can also be seen as essayistic, in that each novel is an ‘essay’, in the Montaignian sense: an exploration. A Spy in Time may be your boldest experiment yet. What was the spark?

Imraan Coovadia: Fallism. Or rather the currents of weird racial feeling that we have, I think each of us secretly has and has to deal with, as a result of living with people we see as strangers.

The JRB: In your recent interviews you have mentioned reading a lot of science fiction. What have been your favourites?

The JRB: Did you read sci-fi as a child? Does it form part of your formative reading?

Imraan Coovadia: Yes. At least when libraries in Durban were desegregated. Lots of novels with laser guns and talking dinosaurs. But also Asimov, Robert Heinlein, Ian Watson, and others.

The JRB: I think it was Zadie Smith who said writers look at their books very differently from readers, so while we may think of ‘her American novel’, for her that particular book is ‘the one with the semicolons’. You said a similar thing in a 2016 interview with Ronit Frenkel, that writers are more interested in whether a novel ‘worked’ than in the ‘subjectively interesting experience’ of reading the book. So, for me, A Spy in Time is your ‘spec fic’ book. But what is it to you?

Imraan Coovadia: First of all, an exercise in pure storytelling. Second, a look at some elemental issues of blackness and whiteness from an altered point of view.

The JRB: In the same interview you mention ‘just ﬁddling around with something about time travel’, adding: ‘I cannot think of anything serious to do.’ It almost sounds like your foray into speculative fiction came about because of a kind of disillusionment with the ‘emptiness’ of or lack of continuation in our ‘serious’ literary space. Is that the case?

Imraan Coovadia: Has anyone ever thought our country was anything but empty? With anything you write, you have to find a way to work with that emptiness.

The JRB: You wanted to be a physicist when you were a teenager. Have you kept up your interest in science? Did that interest help you in writing the science-y parts (as it were) of A Spy in Time: the supernova, probability theory, super-prime numbers and factors, and so on?

Imraan Coovadia: You know, I grew up around doctors so I feel I can diagnose people for simple conditions. My understanding of science is probably about so reliable. But there’s quite a lot of interesting material on code-making, signals intelligence, and spying, which connects the Second World War—a lot of people know about the Enigma machines on German submarines and Alan Turing’s role in beating them—to the modern-day structure of the internet.

The JRB: The idea of historical nostalgia being available only to certain types of people, popularly expressed as ‘black people can’t enjoy time travel’, is something you address head-on in the book.

Imraan Coovadia: Yes. Jacob Dlamini wrote a book about this very concept, Native Nostalgia, though he didn’t see it then as related to time travel. It’s clearly more harrowing to be time travelling when black.

The JRB: In interviews you have been known to express resignation at the inescapable connection between South African writing and race. It seems to me that in A Spy in Time you managed to write an extremely nuanced and imaginative book about identity. Was this another reason you decided to turn to a post-apocalyptic future and time travel?

Imraan Coovadia: Yes. And, you know, South Africans tend to be highly dogmatic when you address their views directly, the way supporters of the Israeli occupation are. This used to be a problem when we had a very conservative white literary establishment which, for the most part, couldn’t imagine there were limits to its understanding or its racial politics. (There are still people at places like Stellenbosch and York who take the basic view, ‘Don’t you see, we’ve read Derrida, we can’t be racists.’) Today it’s probably more of a problem with the rise of Black Twitter, which is more interesting, more vigorous, but also quite short-sighted and destructive on occasion, as we saw, for example, in the fact that nobody thought to go back and read the TRC transcripts, which detail serious and repeated child abuse and child killing by the Mandela United Football Club, before running over any of Winnie Madikizela-Mandela’s critics in April. It’s difficult to engage with these movements directly, as a writer, so you have to think about what other moves you have.

The JRB: A Spy in Time is your first novel since Green-Eyed Thieves to venture outside South Africa. Is there a reason for the change in geographical scope?

Imraan Coovadia: If you go to Mauritius, or Namibia, they’re small enough so that they become, at some level, inadequate objects of attachment. Should I die for Mauritius? Maybe I could just move elsewhere. South Africa feels like it’s on its way there. No disrespect intended to small countries but there are certain mental rules which apply.

The JRB: You called The Institute for Taxi Poetry (Umuzi, 2012) your attempt at ‘writing about the relationship between politics and poetics’. In A Spy in Time, when machines want to keep a secret from a human they turn to ‘poetic’ speech. At other points characters compare the machines to ‘a symphony’ or call them ‘the directors and the playwrights’. Is this book, perhaps, about the relationship between electronics and poetics?

Imraan Coovadia: That’s probably more brilliant than the idea of the book.

The JRB: There are a number of playful touches in the book—place names, types of food, a literary phrase by Dickens becoming a kind of incantation a hundred thousand years into the future, and so on. I imagine you had fun with those?

Imraan Coovadia: I must have. I can’t remember now. I have a very short memory, especially for totally colourless activities like writing.

The JRB: At a certain point in the novel the denizens of the future face a breach in security and are forced to start using old school tech: blackboards, pencils, typewriters, road atlases—but ‘unhackable’ technology is becoming a real-world concern. You were an early adopter of the Kindle, and back then I saw you as something of an ebook evangelist. What do you make of the ‘technofear’ that seems to be becoming more in vogue?

Imraan Coovadia: I used to be a technological optimist, right up to a few years ago. But now, let’s face it, our mental lives have been shattered by screens. (I’ve seen how teenagers grow up.) I find it much more difficult to concentrate, and I’m much more sensitive to circuitous prose.

The JRB: I was listening to your Great Texts/Big Questions talk from 2016, where you speak about Mandela’s love for Tolstoy’s War and Peace, and specifically the character General Kutuzov, the great procrastinator who was also the only general to defeat Napoleon. Through him, Tolstoy attacks the ‘great man’ theory of history; his view of war was that it has infinite causes: ‘A good player who loses at chess is genuinely convinced that he lost because he made a mistake … forgetting that his every move throughout the whole game involved similar errors’. This resonated strongly for me with A Spy in Time; the question of whether or not it would be possible through time travel to correct human history. And, of course, you use the image of the chess board a number of times.

Imraan Coovadia: That’s a very interesting connection. Nietzsche is naturally the philosopher of time travel, with his principle that you should be able to live the same life over and over again, if you were living it well (so the opposite of Groundhog Day). But the idea of historical unpredictability is something I’ve lived with for a very long time. Not to be more abstract than is wise for a writer, but it probably replaced the folk Marxism that everybody with half a brain and half a heart picks up in South Africa. I wrote an article on the image of the chessboard in Adam Smith about twenty years ago—society is like a chessboard but each piece has a mind of its own (what Tolstoy calls ‘a collision of innumerable wills’). It’s a good way to revisit the concept of time travel although in the case of A Spy in Time I relied more on the idea of energy conservation. So you don’t have butterfly effects, or grandson-killing-grandfather type causal loops, because to change anything requires a vast amount of energy.

The JRB: Each of your novels could be, and probably has been, described as ‘a departure’. Are you concerned with maintaining a distinctive voice across your novels, and, if so, how do you do that?

Imraan Coovadia: I don’t have enough readers to worry about having a brand.

The JRB: You mentored Masande Ntshanga during his MA in Creative Writing, and endorsed his debut novel with a cover shout. Interestingly, Masande’s new novel, Triangulum, also leans into speculative fiction. Through your work at UCT, or just your reading, are there any other young South African or African writers we should be looking out for?

Imraan Coovadia: Masande is a very bright light. There are a couple of very interesting young fantasy writers in our UCT programme, who look like they’ll do great. There’s a bunch of people doing really good work. The strangest thing is that while the university system has been collapsing, particularly at UCT, and while there’s almost no readership in the country, the quality and range of young writers has just gone up. Don’t the Chinese have a saying, ‘pity the land that has too many good writers?’