The Only Story is Julian Barnes’s thirteenth novel in a career spanning thirty-eight years, but his gift for turning grim material into something darkly comic and elegantly sad is undiminished, writes Wamuwi Mbao. 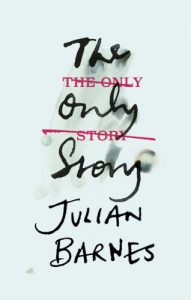 There was a young man named Paul. He was exuberant and diffident and happy. One day, he abandoned his family for the love of an older woman. He loved well; she took to drink, and their relationship ended in disaster.

This is a churlishly simple summary of Julian Barnes’s latest novel, The Only Story. I make it only because Barnes is one of those authors who seems impatient with plot. Like an architect who thinks the scaffolding vandalises his design, Barnes is an essayist who has wandered into the fiction section. This makes for a mode of writing that teems with ideas and conceits about the way we live now, and results in the sort of book you pick up as a gift for a friend-who-reads, which they will happily accept and probably never finish.

It’s my suspicion (but only a suspicion) that Barnes is a writer whose name is tidily recognisable; a corresponding degree of familiarity with his work is not required. The fact that he has been sanctioned as worth putting on your bookshelf by the folks at the eminent Man Booker Prize might imply a degree of Serious Author-ness that is off-putting to some. But Barnes is saved from this Coetzee-like fate by his levity, which transforms grim material into something by turns darkly comic and elegantly sad.

The Only Story is a novel about the slow unraveling of a traumatic love affair. Paul, a callow young university student, decamps to his parental home in a middle-class demi-suburb, all half-timbered houses and neat privet hedges. This stultifying hamlet is the embodiment of a value system and way of life with which Paul is thoroughly and unrepentantly disenchanted. He joins the local tennis club, observing with detachment the pickled rituals of belonging enacted by the ‘year-round Hugos and Carolines’. When he meets Susan, who is forty-eight and married with two children, the pair become first tennis partners, and then lovers. The town is, of course, scandalised, albeit in a quiet, curtain-twitching way, but Susan’s ineffectual husband seems quite oblivious to their goings-on.

Paul assumes many things about the world at this point, and the novel devotes itself to cruelly shattering his illusions about how love works. Susan leaves her husband, and she and Paul run away to London, where she sets them up in a house with money from her ‘runaway fund’. But their happily-ever-after takes a dark turn. Susan spirals into alcoholism, and Paul’s youthful idealism is crushed by the abject facticity of their circumstances.

The novel is told to us from the present, with an elderly Paul trying to establish an account of what that time meant. He notes that ‘in love, everything is both true and false; it’s the one subject on which it’s impossible to say anything absurd’, and the novel proceeds with this motto firmly in hand. If you’ve read Barnes’s earlier work, the mordantly self-ironising narrator who pitches into something both foolish and scandalous ought to be quite familiar. What we read is broken up into sections, with Paul narrating the first section, the flowering love affair. The middle section is in the accusatory second-person, as Paul attempts to make sense of why Susan and his lives are unraveling. The third section, which covers the years after the affair, is related in the register of distant third person.

The Only Story feels like an example of the kind of fiction-about-fiction that John Fowles employed to such good effect in The French Lieutenant’s Woman. It is a novel in which nothing much happens—’There are things I can’t be bothered to tell you,’ Paul notifies us at one point—but it is this willful inarticulacy that signifies the novel’s major concerns: What is it that gets in the way of happiness? Why is it naive to expect fulfilment from life? Caught in the cloying mud of post-war England, just before the Sexual Revolution came along to unstick the human race, the characters in Barnes’s novel are doomed by history, and fated to be spun apart by the centrifugal whirl of a dying world order.

For all that, The Only Story is mainly a novel about how we construct narratives to give account of the things that happen to us, a sub-genre healthily populated by male novelists of a certain age. It’s a genre inhabited by engrossing works like Javier Marías’s Your Face Tomorrow trilogy. On the other hand, it’s also a genre inhabited by novels like Alain de Botton’s The Course of Love, which feels like a set of loosely-stitched sermons on the nature of relationships. Barnes himself has dipped numerous times into this sort of writing, and the forensic turning over of detail in the search for truth is familiar territory for him.

But where The Only Story is especially adept is in the way it both inhabits and diagnoses the condition of a certain strain of white Englishness, in which the promise of youth is choked by the dust of persistent conventions. There is something of Philip Larkin’s vinegary observation of English life in Barnes’ writing, although The Only Story is sweetened by the author’s languid and aphoristic prose style. The novel is set in a nineteen-sixties England that we tend to imagine as being the centre of a pop-culture wave of hair, drugs and rock n roll, but which was in reality quite at odds with the modernity that was seeping out of its corners:

We didn’t do anger in my family. We did ironic comment, snappy rejoinder, satirical elaboration; we did exact words forbidding a certain action, and more severe ones condemning what had already taken place. But for anything beyond this, we did the thing enjoined upon the English middle classes for generations. We internalised our rage, our anger, our contempt. We spoke words under our breath. We might have written some of those words down in private diaries if we kept them. But we also knew that we were the only ones reacting like this, and it was a little shameful, and so we internalised it all even further.

This is an England whose fetid parochialism is repellent to our narrator. It’s the England that gave birth to Fawlty Towers and One Foot in the Grave, but it’s also the wet-mouthed, horrible England of Ian McEwan’s On Chesil Beach. Here, Barnes is illustrating the long and agonised death of a certain kind of ignorance, and he makes the related era feel as far and as remote from us as it is possible to be.

There is a distinctly old-fashioned pleasure to be had in reading a Julian Barnes novel. In The Only Story, he rakes over the malevolence that underwrites middle class England with restrained, long-limbed sentences may seem faintly out of place, but what emerges from these embers is a writerly desire to clarify the way we think about things that are fundamentally dear to us. What is being communicated here, then, is not simply a story, but a way of thinking about how stories possess us.