Nozizwe Cynthia Jele’s new novel, The Ones with Purpose, will be out on 20 April, 2018. 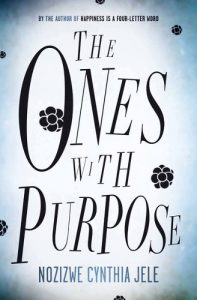 When her sister, Fikile, dies fighting breast cancer, Anele has to ensure that the ceremonies and rituals preceding the burial are performed. Fikile’s husband, Thiza, is nowhere to be found.

Memories of Fikile, who sacrificed her youth to take care of their household and trapped herself in a marriage with Thiza, haunt Anele. Only she knows of the chance Fikile had to escape.

Will familial responsibility swallow Anele’s life the way it did Fikile’s? Or is she allowed something more?

Read an excerpt from the opening chapter:

home is better than
this place

I imagined a dying person’s last breath as something resembling an exclamation mark, distinct and hanging mid-air like an interrupted thought. My older sister Fikile’s last breath before she dies is nothing of the sort. There is no rattling noise at the back of her throat. No relentless twitching. No clinging to life. Fikile dies with no more fuss than a switch of a light bulb.

I wake before the unforgiving December sun rises fast and fierce, before T-Bone starts howling and chasing his own shadow. People on the radio and television have said it is one of the hottest summers the country has seen in a while. Government officials have pleaded with the people to stay hydrated and keep the festivities indoors—a call unheeded by the residents of New Hope township, who go about spending their hard-earned year-end bonuses and savings. Smoke arises from braais and weddings and traditional ceremonies at every second house. Radios boom full blast with the latest House and Afro-pop music, and the children skip rope and kick tattered leather soccer balls and merrily suck on ice pops, leaving their mouths in varying shades of blue and red and purple. Even those whose dreams had perished in what was undeniably a bad year, a testing year, swallow their failures, collect their pride, put on brave smiles and join in the merriment. Of the heat, Ma said this year’s is as if the air was cooked first before being released. Miraculously people know how to breathe in it.

I lift the thin, white sheet, I climb out of bed to brush my teeth and wash my face. I move quietly so as not to wake Sizwe next to me, unperturbed by the heat, his crescendo of snores sending tiny vibrations across the room. It is a wonder to me how, with his leanness and good health, Sizwe manages to create such a disturbance. I envy him though, for his ability to sleep through a crisis. I have managed no more than a couple of hours’ sleep since we brought Fikile back home from the hospital two days before.

For good this time.

When we last took Fikile to New Hope Hospital, Sister Luthuli, whom I know from the years of coming in and out of the hospital, pulled me aside. This was after Fikile had come down with a fever that left her hot and cold from night sweats, her body drenched, and pain palpable in her twitched lip. Even Ma’s trusted mud-brown concoction of indistinguishable roots, chillies, lemon, garlic and honey had not been enough to break the fever. Her breathing was so shallow, as if the fever was feeding off it.

‘She won’t get better, not here anyway.’ Sister Luthuli said, not impolitely, that there was nothing the hospital could do for my sister at that stage. It wasn’t the first time she had told me this, preparing me for the worst. ‘Best to take her home and keep her warm and comfortable. I’ll give you something for her to take to numb the pain.’

‘She’s not breathing properly, I can’t take her home, not like this,’ I protested. ‘We don’t know what to do. I’m asking you to keep her for a few days until the fever subsides, please.’

‘Anele, what I’m trying to say is, today your sister has a fever and shortness of breath, tomorrow she will have difficulties swallowing, and a day after that something else. Are you going to rush her here each time? Just look at her.’ Sister Luthuli pointed at Fikile with her eyes. ‘She doesn’t deserve this treatment. Please Anele, let Fikile spend the last of her days surrounded by people she loves.’

I refused to look at my sister, instead stared the other away. A turbulent motion rose through my cheeks, settling behind my eyelids, hot and wet. I swallowed my saliva.

‘Fikile’s body cannot cope anymore and there is nothing we can do for her. As much as this is hard to accept, the worst is almost over for you, and for her,’ Sister Luthuli continued, exasperated. ‘This can’t be easy for her either. I know it is hard, especially for the children to see their mother like this. I went through the same with my husband. In the end, I decided to let him come home and die in the care of people who loved him, in the house he built, and the bed he slept on for years. It was the hardest decision I ever had to make, but I have no regrets,’ she paused as if to select the words in her mind, ‘home is better than this place.’ She squeezed my shoulder lightly before walking away. A few minutes later another nurse appeared and wheeled my sister away. I turned to Sizwe and held him tight.

Sister Luthuli’s words played in my mind; I couldn’t sleep. The following morning I brought Fikile back home.

From my bedroom to Fikile’s room at the end of the narrow hallway, I pass Ma’s bedroom which she shares with her grandchildren. I picture the children, my daughter, Mvula, and nephew Bafana, piled on Ma’s queen-size bed, sagging in the middle from the years of use, and my niece, Lesihle, sprawled on the small mattress on the floor, exhausted from the previous day’s play. School let out earlier in the week; it will be another month before they reopen. The children were starting to complain of boredom. I hear the familiar murmurs of Ma’s morning prayers peppered with muffled sobs and careful nose blows. Ma cries a lot during her prayers these days, such that later when she joins me for tea, her face is mushy and raw as if she was up all night fighting invisible monsters. Prayers are her new habit. After more than a two-decade-long church absence, Ma woke up one day, shortly after Fikile’s diagnosis, and walked to Reverend Madida’s house. From then on, every Sunday, she dressed Mvula and waited for Fikile to take them to church. She started adorning herself with the black and purple cloth worn by the church elderlies, and attending Bible studies and prayer meetings with the women of prayer. She returned to society, the same society that had chewed and spat her out and left her in a black hole for years. Old friendships were rekindled; aunties who were present in our childhood but had not set foot in our house in years, and who, when they bumped into me or my siblings at the supermarket, in church or on the streets, looked at us with sharp embarrassment, once more began to make regular appearances. They told Ma how proud they were of her for bravely tackling the devil by his horns. They denounced alcohol, and in their high-pitched voices declared a new war on this destroyer of families.

‘Fiks, are you up? It’s me, Anele,’ I whisper as I walk in. My senses had long adjusted to the darkness and lingering scents of camphor and death. Fikile’s eyes are closed, but her moans suggest she is not asleep. ‘Did you get some sleep?’ I lean over, touch her forehead and gently plant a kiss. Her ashen, paper-thin skin feels cool to my lips. I open the blanket and run my hand over the sheet, relieved to find it dry. ‘How are you feeling, are you in pain?’

Fikile slowly opens her eyes, moves her head slightly up and down, and parts her lips.

I bend over expectantly. I would give anything to hear my sister’s voice again. Fikile last constructed a sentence several weeks back, and even then it was nothing more than a whisper of her children’s names in the order she had brought them into the world—Khanya, Lesihle, and Bafana.

‘What is it?’ I lean closer. Fikile’s body has shrunk into itself under the blanket, leaving an outline, an approximation of the woman she once was.

‘Shh, okay, don’t say anything. I’ll get your medicines and something to eat. Will you try today?’

Fikile shuts her eyes. A lone tear rolls down her cheek, collects at her collarbone.

‘Oh, you can just try, sisi, you don’t have to force yourself.’ I wipe her face with the back of my hand.

I leave Fikile’s room in haste and close the door gently behind me. I move to the kitchen where I fill the kettle with water, and put it to boil to prepare sour soft porridge for everyone. I stand there transfixed, watching the bubbles from the glass kettle form slowly at the base and rise and pop. I feel parts of my body burst along with each bubble. The kettle snaps shut and stops.

I don’t hear Ma walk in.

‘I dreamt of your father again.’ She pulls out a chair and sits hunched over the table, her hands on her head. She does not look up when she speaks. ‘He was wiggling his finger as if trying to tell me something. His lips were moving but his voice was not there. I tried to tell him I couldn’t hear, but each time I moved closer to him he stepped back until he was only a figure on a horizon.’

I pour water in the pan and stir in maize meal until the mixture is thick and smooth. After a few minutes, I lower the heat on the stove and make us tea.

‘After all this time, I still sense your father’s disappointment.’ Ma looks up, gives me the most direct look through her one good eye. Ma’s eyes are sunken in their sockets as if Fikile’s illness is also hers. ‘Do you blame me too?’

One thought on “Home is better than this place: Read an exclusive excerpt from Nozizwe Cynthia Jele’s forthcoming novel, The Ones with Purpose”