The JRB is proud to present an exclusive excerpt from Nthikeng Mohlele’s new novel, Michael K. 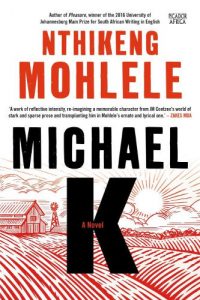 Nthikeng Mohlele had a busy 2017. His novel Pleasure won two major awards—the University of Johannesburg Main Prize for South African Writing in English and the K Sello Duiker Memorial Literary Award—and was also longlisted for the International Dublin Literary Award. His newly released novel, Michael K, has already caused quite a splash in 2018, being a response to JM Coetzee’s masterpiece, Life & Times of Michael K.

He chatted to The JRB briefly about the genesis of the book.

The JRB: In this excerpt, the reader is introduced to your character of Michael K. What kind of process did you go through in imagining and fleshing out this character?

Nthikeng Mohlele: There will always be tensions and contradictions when artists present or speak about their own work—illusions and countless blind spots. The artist is no doubt the closest person to the work, but this does not mean that their biases, prejudices, miscalculations, interpretative range and choices can conclusively be regarded as universal truths.

It is an awkward thing, speaking about one’s writing—a pastime that can best be described as artistic navel gazing. It is not illegal, morally ambivalent or unheard of, but weird. I therefore wish to shy away from the self-imposed doctor mode (placing a literary stethoscope on myself, self-diagnosing, and breathing in and out in self mockery) of pretending to know for certain or in totality what the reader expects or will experience in encountering Michael K—a new but old character of the famous kind. I wish to simply introduce these sample passages by saying: reader, allow me to reintroduce Michael K to you, originally from JM Coetzee and now reimagined through Nthikeng Mohlele’s creative prism. 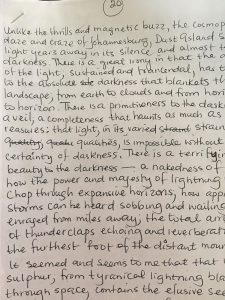 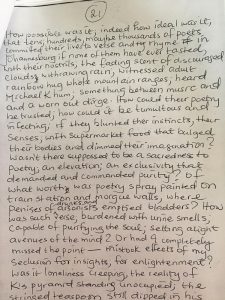 There is a dot on the horizon—or, more precisely, a dot on the long dirt road that bisects the distant mountains, cutting across the plains mocked by worthless shrubbery to the west and teased by the promise of farming to the east. Here is a cold fact: proper farming is impossible here. The weather is too temperamental, too volatile, making hard labour and the prospects of a worthwhile harvest precarious. And yet a paradox remains: farm or perish. The rains can be good, but never reliable, because the storms can be so obscene and dictatorial that it is often pointless even to live in hope. Last night saw such a display of the arrogance of nature—first just the hint of a breeze, a stirring, then a whirlwind that morphed into a brief dust storm, and an unexpected hailstorm overnight. The relief from the sweltering heat turned to worry and finally terror when the storm seemed determined to snuff out the light and nudge the devil even closer to Dust Island, a seemingly forgotten outpost far flung from Cape Town.

All around there is evidence of how ill mannered storms here can be: amputated trees, ravaged birds’ nests, savaged vegetable gardens, cracked and broken windowpanes. The wet earth, crimson, makes it impossible to know for certain if that dot is in fact a figment of my imagination. The heat brings with it discomforts of varied kinds, but also certainty, in that dots on the horizon can be confirmed to be moving objects—a truck or motor car raising clouds of dust. Donkey carts do not do that; neither does the postman on horseback every third week. You have to be either remarkably stupid or a spiritual crusader to exist on this frontier, with its dried-up dams and rusted windmills, its abandoned ostrich farms and neglected piggeries. It is doubtful whether God intended Dust Island for human habitation—or whether its harshness was simply a refusal to be settled, farmed. There is a sense of progressive but hesitant decay about the place, which perhaps explains the trickling in of nomads and fugitives, as well as reticent D-grade novelists dabbling in philosophy at solitary retreats, moral castaways courting obscure lives.

We buried Jimmy Hendricks yesterday—a burial before the storm, laid to rest one of our greatest luminaries, understood to be and acknowledged as a talented poet, even though none of the Dust Islanders have read a single stanza by him. He was blind and senile, great by reputation. Some opined that poetry resided in every flutter of his eyelids, each curl of smoke from his pipe, in the raw passion with which he dug graves. It is not a fancy cemetery, the Twelve Apostles, the graves more heaps of red earth than the mosaics and cathedrals of Cape Town. We know who is buried where—the modest graves given distinction by means of thorn wreaths, motor-oil cans and rusted saucepans, crosses cobbled together from firewood and rope.

There is, in this outpost of low-lying shrubs and anthills with not a single butterfly in sight, the devastation of our burials and sombreness of our weddings. We live by a generally accepted principle that each household, no matter how debased or fragile, is expected to master a trade. So there are coffin makers, coffee-bean purists, gravediggers (day or night, rain or shine), brewers of trusted home remedies. We scout for Jimmy Hendricks’s poetry in outlying caves—carved into tree trunks, chiselled on defunct tractor ploughs. But wasn’t poetry supposed to be abundant, in plain sight, not obscure? Or did writing it in blood on his donkey cart give his work literary tremors, artistic worth? Dust Island legend has it that there was a time that Poet Hendricks wrote devastating poetry in long hand, rhyming prose committed to the back of matchboxes—verse that travelled back and forth among Dust Island’s thirty households, as Dust Islanders borrowed and returned as few as three matchsticks. The very being, the essence and integrity of Dust Islanders included returning seven matchsticks if seven had been borrowed, on time and free of defects. Late or defective matchsticks could plunge a household into darkness, render cooking impossible, strain relations. The same applies to salt and paraffin—to ensure bearable food and lit lanterns.

No one knows for sure where the dirt road originates, only that it is long and old, as old as the weather and the seemingly time-proof fence that borders it, a fence afflicted by rust and minor acts of vandalism (a piece stolen to fix a broken shoe or a wheelbarrow, to replace a pot handle). The fence tells silent stories—stories only Dust Islanders seem to understand: how it whistles when a breeze warns of looming whirlwinds; alarming confirmations of the presence of deadly serpents that have shed their skins along the perimeter—how the discarded skin flutters, recoils and straightens in the wind with potentially deadly insignificance; and that the beginning of rotting wooden posts indicates another two hours’ walk to the R403, which by bicycle or truck leads to the N2 into Cape Town. Every walk or bicycle trip to the R403 is understood to be suicidal: lightning strikes, snakebites, the pounding of hailstones the size of fat peaches. The happenings of Cape Town are distant and hazy, those daring enough to brave unpredictable thunderstorms in the summer telling of road signs pinpointing only the general direction of the city. Cape Town is another world, foreign and mystical, existing without any sense of immediacy.

About all I knew of Cape Town and its surrounds, though still sketchy and fragmented, was from my neighbour of just over eleven months, a tall scrawny man with a harelip, who spoke with a fully formed lisp. An avid pumpkin gardener, he claimed to have had survived a war and a stint at a hospital, that he had worked as a gardener in his youth—evident in how he handled gardening tools. He spoke rarely and dispassionately about Anna K, his deceased mother, who perished on a wheelbarrow trip to Prince Albert. In blue overalls my neighbour tended to his pumpkin seedlings, taking great care to remove even the most harmless weed that dared invade the spotless garden, cultivated and watered with deep and practised tenderness.

The rest of his story emerged as little more than disjointed fragments, lost amid what seemed like meditative withdrawals. He was the only Dust Islander without any sense of communal belonging—lonesome and solitary. He could not be accused of being arrogant or unpleasant, though. We had come to respect that he lived in his own world and, when it wasn’t pumpkin season, spent most of his days slumbering in the shadow of a tree or gazing forlornly into the distance. It was evident that he had had a hard life—but not one bludgeoned by matrimonial fallouts, not one distorted by debt or the perils of disease. It could be concluded that he was, except for the harelip and skew nose, not a sickly man. And yet, a peculiar weariness wore him down, such that he existed rather than lived among other Dust Islanders. He could not be accused of laziness either, for he could be quite industrious, committed to ferrying water in buckets or chopping wood to the point of exhaustion. Or maybe it was the ongoing construction: dislodging a stone here, plucking a hole there, and sealing defects with laborious patience. But then weeks could go by without him even emerging from his house—a single-window pyramid impression cast from wood and mortar that had miraculously withstood Dust Island storms. Impromptu visits found Michael K sprawled on his bed, his breathing shallow, fast asleep. It was a constant source of amazement how someone could sleep day and night without stirring—fully clothed in blue overalls, nibbling on raw pumpkins in between, leaving rabbit-like bite marks on the vegetable, spitting seeds out onto the floor as insurance for subsequent harvests. As seed banks go, Michael K had the most impressive collection in all of Dust Island, seeds categorised and stored in see-through peanut-butter jars and old Coca-Cola bottles. Peaches. Spinach. Avocados. Mealies. Pumpkins. And watermelons.

Not unexpectedly, Michael K was a source of some curiosity, or perhaps it was just me. What does the K in your name stand for, I asked him, to which he shrugged his shoulders and continued nibbling on a piece of pumpkin. Was it an initial, a nickname or the first letter of a last name—Koekemoer, for instance, or Kloete? I persisted, but he just mused and walked away.