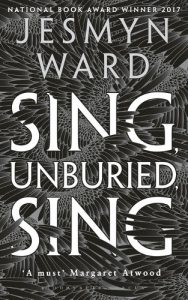 Pop wrestles the goat like it’s a man, and the goat’s knees buckle. It falls forward in the dirt, turns its head to the side so it’s looking up at me with its cheek rubbing the dusty earth and bloody floor of the shed. It shows me its soft eye, but I don’t look away, don’t blink. Pop slits. The goat makes a sound of surprise, a bleat swallowed by a gurgle, and then there’s blood and mud everywhere. The goat’s legs go rubbery and loose, and Pop isn’t struggling anymore. All at once, he stands up and ties a rope around the goat’s ankles, lifting the body to a hook hanging from the rafters. That eye: still wet. Looking at me like I was the one who cut its neck, like I was the one bleeding it out, turning its whole face red with blood.

Jesmyn Ward’s Sing, Unburied, Sing is a profoundly American novel. I don’t mean simply that the work speaks to contemporary American concerns, although it resounds with the country’s failure to reckon with its racial terror. It is a profoundly American novel because, like the best American novels, it examines the grotesque mythology at the centre of the nation’s conscience, in order to make sense of the country’s vexed relationship with its history. This is a novel with a reach that extends as far back as the monstrous muddy aftermath of slavery, taking into its sweeping arc lynchings, prison gangs, and the ugly transition of the Old South to modernity.

The latest of Ward’s novels picks up the thread that runs through her earlier work. Her bleak 2011 novel Salvage the Bones, which fictionalises the effect of Hurricane Katrina on poor Black people, cuts at the broken promise of America’s liberty—a liberty that has always meant something different for Black citizens. Sing Unburied Sing also draws on the intimate register of family life, but overlays it with a supernatural dimension.

The American novel in which some sort of shameful secret suppurates is a long-established tradition populated by the grey and magisterial of that country’s literature, and this plot supplies the frame of Sing Unburied Sing. We are introduced to an African-American family who live in rural Mississippi. They are battered and listing in the water, holed by too many tragedies. As the daughter, Leonie, embarks on a journey across the South to pick up Michael, her white lover who is being released from jail, we dip beneath the waterline to get a better glimpse at what sad history informs the novel’s present.

We soon discover that the novel is a ghost story, where the haunting is an easily legible allegory for the lingering traumas that choke the family: the promising older brother shot dead in a jealous rage by a white boy he thought was his friend; the young boy who roams the world of the living because he doesn’t know how he died; the mother, dying of a cancer that hollows her out and hollows out the backbone of the family as it does so; the children, inhabiting what it means to come from a broken home where the father is in jail and the mother is a drug-using dissipate.

Much of what we read is through the eyes of one of these children, Jojo, an eleven-year old boy. It is Jojo who watches his grandfather slaughter and skin the goat, an act of violence that is being done for his sake: it’s his birthday the next day. Jojo is a watchful and cautious interlocutor, and his ability to hear the meaning in the crying of his baby sister or in the sounds made by animals partly explains why it is also he who can communicate with the dead. His is a child’s voice faithfully rendered, and through his ability to empathise we intuit what is lacking in others.

It can be difficult to sympathise with Leonie, for example, the junkie whose drive across the county to rendezvous with the father of her children is what spurs on the novel’s plot. Though she too sees dead people, she lacks her son Jojo’s patience and understanding. Quick to anger, often selfish, and utterly frustrated by her inability to connect with her children, she is a difficult and demanding character. But we see glimpses in her connection with Michael that tell us she is capable of love.

That the novel opens with the deeply visceral slaughtering of a goat, part of which is quoted above, lays the groundwork for what will follow: how violence soaks into the family until there isn’t a pore left to absorb the blood. The twinned acts of violence around which the novel gathers itself are echoed in the haunting opening: not a Cormac McCarthy-esque spurt of bloody horror, but something quieter and all the worse for finally being so unremarkable. The climactic revelation can’t but remind the reader of a similar revelation in Toni Morrison’s Beloved, but that doesn’t detract from Ward’s novel in the slightest.

Like Beloved, Sing Unburied Sing is a grief-struck incantation for the unresolved dead, and its mystical story is similarly a way of thinking through cultural grief. But where Morrison’s novel is a conversation with the past, Ward has more in common with Ta-Nehisi Coates in Between the World and Me or Raoul Peck in the incendiary I Am Not Your Negro in her concern with understanding what happens when young Black men are violently snatched away, subsumed or silenced. And, like those texts, Sing Unburied Sing has another ghost looking on: James Baldwin. The writer is a soft echo through this novel, forming part of a tapestry of Black cultural history that underpins what we are reading in significant ways. But if there is Baldwin, there is also Jordan Peele’s Get Out: the film’s horror is exhaled in Sing Unburied Sing‘s Orphic journey. It makes the novel feel brilliantly up to date rather than merely faithful to history.

The story is unravelled for us in a sequence of tellings and retellings, where William Faulkner’s influence is richly concentrated. This means it will draw inevitable comparisons with The Sound and the Fury, but such comparisons are palliative, a way of closing down meaning (‘This Is the Box This Book Fits Into’) rather than opening up alternative ways to think about a pervasive cultural problem: what does it mean to write from a place of greater knowledge?

Ward writes in short, portentous sentences for the most part, but occasionally the words swell into wonderful descriptions, such as when she describes a character ‘staring up at the window, his face like a shattered plate’. Ward shows that it is possible to write a Faulknerian story without sounding like Faulkner, or resorting to the clipped formality of McCarthy. Generally, the prose in Sing Unburied Sing is exacting and nimble and true to what it is trying to represent. There are rare moments where it stumbles, however. Here is Leonie, describing the joy of a shared moment with Michael:

I’ve never had enough of this. After Michael and I got together in high school, I got pregnant with Jojo in just under a year: I was seventeen. Ever since then we had Jojo and Michaela around us, making those spaces bigger between us. I remember it in flashes, mostly when I’m high, the feeling of it just being me and Michael, together: the way I swam up and surfaced out my grief when I was with him, how everything seemed so much more alive with him. We parked out in a field under the stars, in his pickup truck. We’d sneak and swim in his parents’ aboveground pool, sinking under the water in the blurry blue and kissing.

What starts off as Leonie wistfully holding onto a too-fleeting moment of intimacy drifts out and starts to sound like a parody of an old Bruce Springsteen song. Why would Leonie notice the pool’s being above ground? She wouldn’t, because it’s an authorial intrusion—the writer overruling the character—rather than an authentic voicing. It’s a moment where the author is foundering in her attempt to capture what Leonie might be thinking. It seems to me that the clear answer is that the character—who is cursed by an excess of thought, surely—wouldn’t be nostalgically examining her life at that moment.

For all of that, Sing Unburied Sing is a delicate, unmelodramatic telling of a story that threatens to spill over with emotion. Unlike the magisterial American novels with which Ward’s work invites comparison, Sing Unburied Sing is neither brawler nor bawler. It takes up Baldwin’s declaration that the story of America ‘is not a pretty one’—on account of the violence at the centre of the nation’s coming into being—and tries to inhabit what that unprettiness means for those most touched by it.