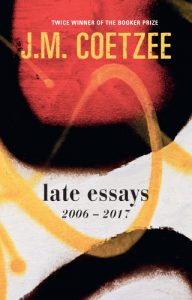 Reviewing anything by JM Coetzee is difficult without resorting to well-worn phrases. How to write a review that doesn’t sound like it’s been peppered with the literary equivalent of Shutterstock? You can’t mention Disgrace. You probably shouldn’t mention Australia, vegetarianism or that anecdote about JM Coetzee and The Dinner of Silence.

Thankfully, half a critic’s work is in ravening for the apposite phrase that is already written. Unfortunately, however, any artful review of a writer like Coetzee becomes a challenge without falling back on a few staples, and the concept that kept springing to mind as I was writing this review was that of Late Style. A hashtag before the hashtag, Late Style was coined by Theodor Adorno in the late nineteen-thirties, given vitality by Edward Said in the nineties, and ever after committed to the category of ‘useful phrase/great title’ by anyone writing about the particularities of the writing life in its autumn or winter phases.

That I have resisted working this stolen scrap into my review of Coetzee’s Late Essays has more to do with my fear that mentioning Adorno, Said and Coetzee in the same piece would seem excessively clever than with the term’s suitability. Late Essays is a continuation of a trend inaugurated by Stranger Shores (2001; not Coetzee’s first essay collection, but a friendlier one than the ponderous 1992 compilation Doubling the Point and the first which collected his more narrow literary essays) and continued in Inner Workings (2007). What especially animates the collection is a concern with the contours of the writing lives of authors, from Daniel Defoe to Philip Roth.

But Late Essays also arrives after a run of imperturbably odd things from Coetzee. There have been letters of exchange with Paul Auster (witness the Great Master and The Master of Weird discussing sports!) and Arabella Kurtz (a fascinating discursion on fiction and the writing process), and the most recent Jesus novels, whose calm opacity has occasioned reviews that sound like veiled accusations of trolling. The suggestion is that Coetzee’s late fiction, all worryingly experimental in form and content (false biographies, deformed doppelgangers) is out of step with what is expected of him by his public.

There may be some relief, then, for those readers in the essays that make up this volume. Deeply expansive in their questioning, they are also an exhibition of Coetzee’s ways of thinking. The essay on Roth begins with a detailed exposition on the history of polio in North America. It is both a review of Roth’s Nemesis and a way of thinking through the role of fate in Roth’s writing. Hence Coetzee’s rather abyssal question: ‘How does the logic of justice work when vast universal forces intersect the trajectories of individual human lives?’ But while Coetzee praises the novel for its artful plot, he is also sensitive to the fact that the writing is noticeably diminished when compared to Roth’s earlier work. It’s an essay that is doing many things and one thing all at the same time, and yet it crystallises around the central concern of many of the pieces that make up Late Essays: what structures how a writer writes as they grow older?

The assemblage of writers whose work is the subject of the various pieces in which Coetzee answers this question are all personalities in whom Coetzee finds enigmatic and suggestive provocations. In 2017, we might question why all the writers, with the exception of Irène Némirovsky, are white men. In that regard, Late Essays is a frustratingly closed world, if only because I might find it interesting to see Coetzee’s range—his knack for teasing out complexities—applied to subjects who aren’t part of the limited coterie of the White and Western.

Here then, whether you like it or not, is the Late Style. Disharmony. Intransigence. Characteristics that mark out the twilight figures who do make it into this book: Tolstoy, Flaubert, Defoe, Hawthorne. Coetzee writes about them in the style that he has made his own: interested, picking at details here and there, asking and resolving difficult questions that lie between writer and text. Here is Coetzee discussing Zbigniew Herbert:

Those short sentences will be familiar to anyone who has read Coetzee’s later work. If the rhythm is didactic, the observation is wonderfully alive to the gameplay that structures human mythologies. To read each essay is a bit like watching the author solve a differently ordered Rubik’s cube (only more entertaining, perhaps).

So there is some merit in seeing what might be discerned in these essays. Though they span the best part of a decade (the earliest first saw germination in 2006), the pieces are worthwhile reading not only as expositions of writerly craft, but as writing that sheds light on Coetzee’s own preoccupations. The trait Coetzee seems drawn to in most of these writers is the myriad quite personal things that influence the writing craft, and it is alluringly easy to see links between an introduction to a children’s story about a man and a donkey (!) and Coetzee’s animal activism.

Platero and I [by Juan Ramón Jiménez] is usually thought of as a children’s book. In the book trade it is certainly marketed as such. Yet in this set of vignettes held together by the figure of the donkey Platero there is much that an impressionable child will find hard to bear, and in addition much that is beyond the range of interest in children.

It’s worth pointing out that the Coetzee essay has a particularly scholarly lento. Where the ongoing vogue for the essay form at present has much to do with its ability to function as a sort of fairground of ideas, Coetzee is less playful and more cautious. Coherence builds slowly, accumulating until what has seemed like a slow stroll through the biography of a text suddenly becomes an altogether more serious thing. The caution might be taken for the grievous sin of seriousness, but there is in many of these essays the same dusting of humour that characterises Coetzee’s later fiction. And do I detect the briefest of winks at the fawning academy when, in his essay on Roth’s Nemesis, Coetzee shortens an explanation ‘so as not to build upon the lightest of authorial hints a mountain of interpretation’?

Late Essays proceeds from a point of interest that is less general than first appears the case. It’s the sort of book that Coetzee-philes will dutifully purchase and place on their shelves next to his other non-fiction work. It certainly doesn’t call out to the reader and demand to be read. It is typically Coetzee in the more favourable sense: a lesson in writing about complex ideas, and a work whose central ideas linger more deeply than one first expects.