i think of the room, the way
it separated into definite things
in new light. the sparse spread
of furniture; the writing table
a chequerboard of thought, schemes,
the bed no longer neat,

and beside
it, shiny glasses—unused, a bottle empty
of rum. on my tongue the dance of her
sweat and the sugarcane’s trapped burn
stripped
from every limb her body possesses.

a story—
some old pub nugget of Ethiopian women
and their skill for splitting chickens
into twelve parts, with no need for knives,
just a tender feel for the limits of flesh,
the fear it must inspire in stray husbands—

comes to mind
when i imagine her body
that morning: the hunger that tensed my being
how i was afraid to tell her i might be
in love with her,
terrified

of seeding hopes
i could not suckle,
the salt-charged taste of her
rum
that smoulders still
in the back of my throat.

Tree of the Invisible Man

I can say nothing of its name, save the name
of the factory behind which it stood, the one bleeding
dyes all day, making gutters that once were streams
a carnival of bright death—green, red: Golden

Textiles. The tree itself was a lesson in the art
of contortion, its hard angles an eloquent semaphore;
clear lines of survival under abuse. It had a hole
right through its trunk. First we peeked through it,

but months later we stopped only to see who could
make a matching chink
through cellulose
—that narrow
body. I see its shape now as I close my eyes, the seven
punctures, we managed to riddle it with, the pens it cost us—

coat hangers, twisted forks, a stolen corkscrew, the pale
gleam of those offerings at its base when the sun set;
the view through the gaps if you stepped back—squinted,
as though the eight holes were one, no bark between.

Its dark roughness is the skin I inhabit in this dream
where I’m away from home, visible as a threat, unnoticed
when breathing. I count the bullets shot by ganged boys
in blue, measure their circumference against my skin: 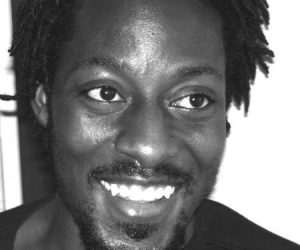 Nii Ayikwei Parkes is the author of the acclaimed hybrid novel, Tail of the Blue Bird (Jonathan Cape, 2009). A recipient of Ghana’s national ACRAG award for poetry and literary advocacy (2007), his work has been translated into several languages. His most recent book of poetry is The Makings of You (Peepal Tree Press, 2010).