Binyavanga Wainaina spoke eloquently about his writing career and his life, and how the two are intertwined, at Wits University recently.

The event was titled ‘How to Write About Everything’—echoing Wainaina’s famous essay ‘How to Write About Africa’—and it was his first major public appearance since moving to Johannesburg in April this year. Wainaina suffered a series of minor strokes in 2015, and as a result his speech is somewhat impaired and his voice tires quickly during conversation. This, combined with an atmosphere of high expectation, meant that Wainaina seemed somewhat overwhelmed at times. Perhaps because of this, his trademark disarming honesty was turned up to eleven, and the event was remarkably moving.

Wainaina made literary headlines in January 2014, when he wrote an essay titled ‘I Am a Homosexual, Mum’ to coincide with his forty-third birthday. The piece was styled as a ‘lost chapter’ from his memoir, One Day I Will Write About This Place, and was published simultaneously on Chimurenga and Africa is a Country. Wainaina said he had been unwilling to come out publicly until he was sure he could do it justice in writing, despite knowing how desperately a positive statement about homosexuality was needed in his home country.

‘I waited to come out for a year, a full year, when I knew that no celebs in Kenya were prepared to say they were gay,’ he said. ‘All the gay activists were not gay, they were either bisexual or straight. People would go to the media and insist that, despite their work, they are not gay. Somebody Kenyan needed to say they were gay.

‘I knew I could do it, but I had no confidence—until I knew I could write about it well. So the night before my birthday I decided to sit down until I got some copy—it’s quite short, the essay—that I liked. And when I liked it, at about two o’clock in the morning, I said “yes”.’

Wainaina has known he was gay since he was ten years old, but said nobody ever broached the subject. He revealed that it was his close friend Adichie who first asked him the question outright.

‘It took a long time before somebody asked me, “Are you gay?” My best friend growing up never asked me—it never even occurred to him that I’m gay because I am very straight-acting. So the first person who asked “Are you gay?” was Chimamanda Adichie. And, of course, I said no. But she liberated something in me, already, just by asking me. Because normally the skies will fall if you say yes.

As Mupotsa pointed out, with reference to his deconstructed interview with Youssou N’Dour, ‘It’s only a matter of acceleration now’, Wainaina has a habit of disrupting the relationship between ‘creator of knowledge’ and ‘interview subject’; his way of writing is about himself as much as it is about his subject.

Wainaina explained, ‘When I found out that I can’t communicate in the world without going through somebody, that’s why I write. Because I can’t write my feelings without them being about Youssou N’Dour or somebody else. That’s how I’ve developed a way to do it. It’s not natural, but it’s very natural to me.’

Another aspect of Wainaina’s style is less a political strategy and more a matter of temperament: he writes best when he is angry. During the talk, he explained the origins of what is undoubtedly his most famous essay, the searing satirical piece ‘How to Write About Africa’.

‘When I write something I feel strongly about, which is mostly the things that I’m not conscious that I feel strongly about … these are the things that make me famous. So “How to Write About Africa” came about because I read Granta’s very prestigious Africa issue. And I felt it was horrible. So I wrote a long email that night to the editor of the magazine. A very long email. I analysed all the entries in his magazine, it must have been twenty-seven pages. And they decided to do another African issue, which took into account my views, which were very extreme at the time, and also used my contacts. But when they asked me to write something, I didn’t have anything to say, because when you are not angry you don’t have anything to say. One of the editors suggested I do a kind of summary of my email. It took me about forty-five minutes. And that was “How to Write About Africa”.’

Wainaina is currently working on two books of non-fiction; one based on that Granta essay, the other his fabled ‘big Africa book’. But he said once those are out of the way, he will get to work in earnest on his first novel.

.@BinyavangaW has 2 non-fiction books to finish, but he says after that he needs to write a novel: 'I hear it knocking on the door' pic.twitter.com/sGda41O4yZ

Wainaina revealed that in fact he has several novels floating around, including one that local publisher Kwela Books was very excited to publish back before he won the Caine Prize—‘And thank God they didn’t’—but he feels now he could live up to his own honesty in fiction.

Wainaina said for African writers it is often the case that the personal and the political collide, no matter how hard you try to keep them apart.

‘I was writing One Day I Will Write About This Place when the clashes of 2007 happened, during the Kenyan election. I was supposed to go back to America, to Union College, that January, but I sent them an email and told them I was not going back, I had to stay home. Apart from the fact that I live in the Rift Valley, it was just too difficult to go back to school.

‘But more importantly this affected the book very immensely because the book was supposed to be personal. I must tell you, many African writers face the same thing, where you say, “I believe in art for art’s sake, I believe I’m supposed to just write this book about my life”, and then some shit happens that politicises the thing. And that is beautiful, but it doesn’t feel like that at the time.’

Wainaina says the ‘re-engineering’ of his memoir that became necessary after the electoral violence caused him trouble with some of his friends and fellow writers, and in retrospect admits that perhaps part of the book were insensitive. But he said his intentions were entirely without malice.

Wainaina, who has spoken in the past about his fond relationship with South Africa, will be in Johannesburg for the remainder of the year. He lived in Cape Town during the heady political days of the 1990s, but said: ‘I am happy I am in Joburg because that’s where I was supposed to have landed at first. I am grateful that I’m doing the correction.’

He only has one further ambition: ‘If somebody could introduce me to Malema, I would be very grateful.’ 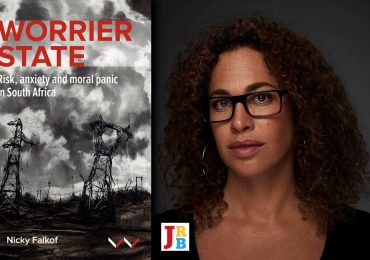 Read More
‘Anxiety in South Africa does not impede…
July 14, 2022 No Comment

2 thoughts on “‘How to write about everything’—Binyavanga Wainaina on the problems faced by African writers, and how to overcome them”