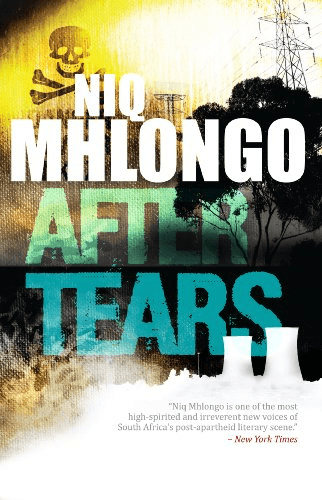 The JRB’s City Editor, Niq Mhlongo, gave Johannesburg’s vibrant arts precinct, Maboneng, its name. Here is an excerpt from his novel After Tears, which contains the passage that led Mhlongo to choose the name.

That was it. I had had enough of cape Town. The cold Atlantic Ocean, the white sand beaches, Table Mountain, the Waterfront, everything I had once found so beautiful about the city, had suddenly turned ugly. I decided right there, in front of the notice board, to go and pack my belongings and leave for good. The compass in my mind was pointing north, back to Johannesburg, my landlocked city, and Soweto. I was sure that if I stayed in Cape Town for one more day I would go mad. The four years that I had spent there, shuttling between the university lecture theatres and libraries, had come to nil. My fate had been decided. I wasn’t fit to become an advocate the following year. I was a failure.

My eyes were burning as the morning started to break. My muscles were stiff and my neck was aching. I knew that I had to be awake at every single station the train came to a halt at as my lady friend Vee had warned me of the dangers of falling asleep along the way. she had advised me that some passengers, especially around the diamond town of Kimberley, don’t have ubuntu and steal other people’s luggage when getting off the train. she had experienced this misfortune on her way home to Zimbabwe via Johannesburg.

We passed the Klerksdorp station at about nine in the morning and, as I stood up to stretch, my stomach started to rumble, from hunger, I suspected.

Inside the plastic bag that I had hidden under my seat there was some left-over chicken from KFC. I could have eaten it, but as soon as I tried to open my bag the woman next to me stared at me with nightmarish suspicion. It was as if I were one of those uncivilised bastards she had always warned her daughters not to dare go out on a date with. so I left it in the bag under my seat.

After the train had passed Klerksdorp Station, I decided to go and brush my teeth in the toilet. As I walked down the aisle, with my toothbrush in my hand, I felt my cellphone vibrating inside my

Nike sweatpants. The small screen on it registered Mama. A shiver ran through me as I answered the phone.

“Hey, my laaitie, it’s your Uncle talking on your Mama’s cell here. Where are you now?” It was Uncle Nyawana at the other end. “Your oulady said I should find out.”

“Sure, Uncle. We are between Klerksdorp and Potchefstroom and we should be arriving at Park Station around one this afternoon. It’s almost an hour behind schedule,” I shouted over the noise of the train.

“Sharp, Advo. I’m sure you came with nice things from Cape Town for your Uncle. Don’t forget my J&B whisky that you promised. A belofte is a belofte, my laaitie.”

“Ah … Uncle, I only have a UCT T-shirt for you. It’s from our law school and has the university logo on it,” I struggled, trying to describe the T-shirt. “I’m sure you’ll love it, Uncle.”

“That sounds nice, my Advo, but I still want my whisky that you promised,” he insisted. “Don’t worry if you forgot to buy for me in Cape Town, there are lots of bottle stores where we can buy. There are the Lagos and Kinshasa bottle stores in Hillbrow that operate twenty-four hours a day. There is also a nice new bottle store here next to Park Station called Dakar. Or, if you like, we can go to Zak Zak in Diepkloof. That’s the cheapest place in the whole of Jozi.”

“Good, my laaitie. I’m sure you got an A in your law school report. I know that you’re slim.”

“We’ll talk about that, Uncle. My battery is low and my cell can cut out at any time.”

“Sharp, Advo. We’ll be waiting for you at Park Station.”

My thoughts raced as the feeling of failure and guilt seized me for the first time that morning.

Ever since I had started doing law at the University of Cape Town, my Uncle had stopped calling me by my real name, which is Bafana, and started calling me Advo, short for advocate.

Mama also had her expectations. According to her, 1999 was my final year at university and, the following year, I would be starting work as an advocate. her simple calculation was that a law degree only takes four years to complete, hence I was already doing my final year. she had completely ruled out the possibility that I might fail, which I’m afraid is exactly what had happened.

I’m not sure if this denial by Mama was due to her limited Western education or her excitement. she had left school in standard seven because she’d fallen pregnant with me, but her ambition, as
she always told me, had been to become a lawyer. ever since I  started doing law she had boasted to her friend sis Zinhle that I was going to be the youngest advocate to come out of Chi.

I negotiated my way to the next carriage in search of a toilet with a sink. The door to the first one read Engaged and I waited outside, looking at the fields through the window.

A few seconds later a lady came out and I went in and locked the door behind me, and started brushing my teeth. I clearly recalled the morning when everything had fallen apart. The morning I went to check the provisional results that were posted on the notice board of the law school. It’s not that I’d expected much, but I couldn’t believe my eyes when I realised that I had failed everything except for Criminal Law.

The concourse of Johannesburg Park station was busy as always that Tuesday afternoon, but as I emerged from the stairs that led down to platform 15 I couldn’t help but see Uncle Nyawana, next
to the Greyhound bus counter, flashing his dirty teeth at me. Standing next to him were three people, but I only recognised Dilika and Pelepele, his childhood friends.

Dilika had been my teacher at Progress High School. He couldn’t seem to bring himself to begin a sentence without saying “read my lips”, a phrase that had quickly become his nickname.

PP was a notorious carjacker in Soweto and his name alone carried terror in the township. his neck and both his arms were covered with grotesque tattoos of a praying mantis, a lion and a gun. he
got them during his time in Sun City. He once served a seven-year stretch there and he always boasted that he was the leader of the feared prison gang the 26s. His story convinced a lot of people in the township as he had some big marks or scars on his cheeks, like awkward birthmarks, and he never told anyone how he got them.

As soon as he saw me, my Uncle tucked his wooden crutches under his arms and limped towards me with a smile.

“I’m glad you finally arrived, my Advo. Good to see you, and welcome to Jozi maboneng, the place of lights,” he said, trying to hug me.

He smelled of a combination of sweat, booze and cigarettes.

“Look at you!” my Uncle continued excitedly, “the Mother city has bathed you. You have gained complexion by spending all that time namangamla namadushu. Yeah, you look handsome, my laaitie. All the girls ekasi will be yours.”

After twenty-seven gruelling hours trapped inside the crammed third-class carriage of the Shosholoza Meyl, I was exhausted and couldn’t say anything. All I could do was smile.

“Come on, meet my bras,” he pointed at his friends with his left crutch.

“You know PP and Dilika already, but meet Zero here,” he said, pointing at the third guy with widely spaced teeth. “He lives in our back yard. he has erected a zozo there. It’s been about three months now. He’s a very nice guy.”

I immediately dropped one of my bags to shake the damp hand that Zero extended towards me. He wore a traditional Rolex.

“Nice meeting you, Zero,” I said, shaking hands with him. His squeeze was very hard, as if he were punishing me for something I had done wrong.

“We’ve been waiting for you since eleven, Advo,” started PP, as we walked to the parking lot along Rissik Street, “and for that you owe us a bottle of J&B.”

Very few people remembered or knew PP’s real name. I didn’t know it either, but it was easy to pick him out of a crowd because of the way he walked. Because of his gout, he stuck his chest out as if it were an arse and walked slowly without his heels touching the ground.

“Read my lips! That’s right, PP,” added Dilika unnecessarily, “we should be attending a stokvel party at Ndofaya. Advo must buy us ugologo so that we can get there already tipsy.”

“Hey, madoda! I told you that my laaitie was a student at the University of Cape Town, and not working there. Perhaps we can ask him for a case of J&B next year when he is already the biggest
advocate in Msawawa,” said Uncle Nyawana protectively.

“Hey, bra Nyawana, read my lips! You must not underestimate the financial power of the students. They have big money from their bursaries and the National Student Financial Aid Scheme,”
said Dilika with confidence. “When I was a student at Soweto College, there in Pimville in the early eighties, I used to save a lot of money from my Council of Churches bursary. Besides, Advo was my student at Progress High School and he has to pay me because I’m his good ex-thiza who taught him until he got a university exemption. If it wasn’t for me, he would have been isibotho, drinking imba mba, or a tsotsi, robbing people here ekasi.”

To stop them from arguing I bought a bottle of J&B whisky at the Dakar bottle store next to the parking lot.