A young man visits a doctor in the hope of being cured of a debilitating mental condition. The doctor comes highly recommended, having trained in France, and he seems confident of curing the young man. He shows the young man pictures, asks him about his childhood and about current affairs. The young man’s irritation builds as the doctor quizzes him.

‘And what is your name?’
‘Little Pepper.’
‘I meant your family name, not your nickname …’
‘That’s what people call me, and if you haven’t got a family there’s no point having a family name … I’d have preferred to have a nice name! A name that sounds good!’
Really? Like what for example?’
‘Robin Hood…’
‘Why Robin Hood? That’s not a Congolese name, to my knowledge!’
‘It would take too long to explain, doctor …’

Alain Mabanckou’s writing seems particularly resistant to interpretation. To call him ‘Africa’s Samuel Beckett’, as the blurb on the striking yellow cover of Black Moses implores, seems like nothing short of calumny. Aside from it being the laziest sort of review information (imagine a restaurant menu describing a Congolese specialty you were interested in as being ‘Africa’s tandoori chicken’) it’s a bit of a reductionist cop-out to say that this writer you probably haven’t read is like this author you’re terrified of reading. 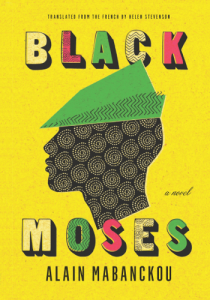 Nevertheless, a few chapters into Black Moses and the comparison starts to cohere. There is something of the more antic Beckett in Mabanckou’s garrulous narrators and, as in Beckett, something is lost in the attempt to pin it down and make it mean something. Mabanckou’s work is disarmingly surreal, so much so that every descriptor risks being reductionist. Moses—or to give him his full name, Tokumisa Nzambe po Mose yamoyindo abotami namboka ya Bakoko—is a strangely assembled soul. Raised in an orphanage on the outskirts of Congo-Brazzaville’s second-largest city, Moses is haunted by the anxiety that he is destined for something greater. His name taunts him by suggesting a destiny that seems unbearably unreachable from the orphanage in Loango, which might as well be an island. It is staffed by a brutal cohort of wardens and overseen by the corrupt and buffoonish director Dieudonné. Moses begins to wonder if something will rescue him and his friend Bonaventure:

Or had God broken His word and chosen another Moses, a darker, handsomer, taller, cleverer, freer Moses, living in a different country where they prayed and danced and sang more than they did in ours?

In a Dickensian rather than Beckettian way, Moses is largely unaware of his being in the grip of larger forces that threaten to crush him. For, starting with the shambolic repurposing of the orphanage as an outpost of the Marxist-Leninist revolution that sweeps the country, every major disruption or grief in Moses’s life is caused by politics. First the Zairean priest, who (significantly) gives Moses his names, disappears suddenly and mysteriously. Then Sabine, the woman who nurtures Moses and provides him with stories, also vanishes without a trace. Overall, his time at the orphanage stands for a certain kind of helpless provincialism, from which his daring escape should bring relief, in the form of self-determination. But as he wanders the streets of the fabled city of Pointe-Noire, engaging in thievery and sleeping in market stalls, Moses finds only alienation.

There is a disordered energy that seeps into the story. What we had taken to be the child’s erratic telling of events morphs into an adult voice whose laconic narration doesn’t quite hide the jagged leaps in temporality, signalled in the novel by countless ellipses. As the political machinations of the postcolonial state swirl around Moses, he is less and less able to make sense of his position in the world. He becomes immutably (and rather inexplicably) deranged, and the suddenness of his madness recasts everything we have read so far.

A casual stroll through Mabanckou’s prose will reveal that he is fond of stories that play truant between the surreal and the outrageous, often with a darkly comic morbidity stirred through. His abiding preoccupation concerns what happens in the modernity-crash moment of coupling and uncoupling between France and the Congo. Thus his novels are always populated by unusual figures (in African Psycho, Gregoire Nakobomayo fancies himself the heir to a notorious serial killer), or animals (Memoirs of a Porcupine), or disillusioned migrants (Black Bazaar), or drunks who prop up bars with names like Credit Gone West (Broken Glass).

Moses is thus completely in keeping with his author’s strange and peculiar characters. But his strangeness is also mirrored by the stochastic world of Pointe-Noire. He meets a brothel owner named Madam Fiat 500, who takes Moses under her wing. And there is a remarkably humorous flashback at this point involving the Zairean president and an argument over height. Mabanckou is certainly one of the most fantastical writers operating today, and because his work both explores and dramatises the psychological dislocations of colonialism, it avoids the trap of excessive verisimilitude.

As with Memoirs of a Porcupine, which was too readily daubed with the tint of magical realism by critics, Black Moses is animated by a piquantly human surrealism, in which plot is less what happens to the characters and more a pliable thing to be shaped by their whims and eccentricities. The titular character quilts the story together via brief, random passages, invoking other characters and annulling them pages later. And yet there is nothing about Black Moses that rings false. What grounds this novel is its hospitality to the strangeness of reality in the postcolonial state. Black Moses doesn’t render this backdrop as pathological or limn it in the colours of famine and failed hopes. Rather, it gives Congo-Brazzaville a dream-like warp from whose blurred byways characters emerge in sudden focus.

Mabanckou’s prose vibrates with strangeness and the knowledge of its own literariness. Like Javier Marías, he digresses at will—here a consideration of the scatological habits of cats and dogs, there an excursus on the dietary preferences of the various ethnic groups that make up the country. The details fall onto each other like dominoes. When the novel ends, you feel you have been giddily impelled along by its humour, and have suddenly encountered a precipice. We realise that the book has been leading us to this point the whole time, the narrative fading to black and its humour suddenly a macabre accompaniment.

For the reader who may have felt that the narrative was drifting further and further from shore, Moses’s possession, his sudden return to lucidity, the snap of violence and the bereft resolution come to stand for the fulfilment of his destiny. The turn happens just as one begins to wonder if the plot is going anywhere at all, and as things resolve into focus it becomes clear that much of the detail that has piled up has been pointing towards this final moment. And yet to read Moses as a poor sop thwarted by a politically repressive postcolony is to overshoot. Rather, Mabanckou wants us to see with candour how the many nameless people—for indeed Moses is the name imposed upon our narrator by someone else—who live and die in such places nevertheless do exist, even as circumstances conspire to hide them from view.