Rise of the Robots: Technology and the Threat of a Jobless Future
Martin Ford
Oneworld 2016

The robots are coming.

Check that: the robots are already here. They’re the algo in our smartphone operating systems, defining the news we consume and the friends we interact with. They’re building our cars, our appliances, our robots. Indeed, cars and appliances are robots—Google and Uber have developed self-driving vehicles; your microwave oven will soon learn how to cope with your eating habits. Probably before that, 3D printers will print 3D printers, and humans will be wired out of the manufacturing process completely. The 80 million factory jobs that China is now off-shoring to lower-wage countries will go to R2-D2s and Terminators. None of this is speculative: Skynet has won. 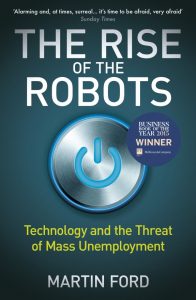 It should go without saying that the automation of nearly every sector of modern life has massive implications for the future of work, and by extension the future of how governments collect revenue, manage the economy and, well, govern. And yet, most governments, immediately after being elected, step into a whirring steampunk time machine and are transported back to the industrial revolution. If they can just get the Gross Domestic Product growing by 10 per cent per year, then businesses will be flush, hiring will be robust, and employees will kill each other for specials on Black Friday.

But, as the futurist Martin Ford notes in his chilling, sobering book, Rise of the Robots: Technology and the Threat of a Jobless Future, the old ways are dying. While South Africa’s African National Congress campaigns by promising jobs and social grants—and its rivals, the Democratic Alliance, promise to create six million new ‘real’ jobs—employment is becoming less and less of an actual thing. Even if organised labour across the world hadn’t been utterly co-opted into mainstream political parties, its influence would have waned just as employment has: across Africa and in most of southern Europe, the bulk of work is considered ‘informal’. Since the financial crash of ’08, the American economy has chugged into full recovery and unemployment figures are at historic lows. But because wages remain depressed, this is still regarded as a ‘jobless recovery’. Most of the post-recovery loot has accrued to the world’s richest citizens, and the societal divisions created by the wealth gap have produced unprecedented political ructions.

Same very much goes for South Africa. Our big corporates sit on massive reserves of cash, and yet they don’t possess the confidence in either the future or the government to invest that money back into the economy. While this looks good to shareholders in the short-term, in the long-term it means that fewer and fewer citizens will be able to afford the products and services that constitute a consumer economy. South Africa is still home to petrol attendants, an antiquated profession in most developed countries, and yet these fuel pumpers will be unnecessary if only the super-rich can afford to drive, and are doing so in robot-made Teslas.

And this, by and large, is the future that Ford adumbrates for us. He is bullish on the chances of artificial intelligence approaching or exceeding the capabilities of the human mind; he is bearish on how modern governments will deal with a fully-automated world. And by no means does he see only low- or unskilled labour disappearing. There are already AI apps that can ably approximate a Richard Poplak book review; meanwhile, blockchain technology will soon render law firms and banks nothing more than a miserly memory. (Hooray!—except there goes the upper-middle class tax base, to say nothing of the scaffolding of capitalist society.) Ford considers policymakers and politicians dead to the threat that automation poses; he understands that organised labour—organised anything, really—can be of no help in a techno-feudal world, where the robots are the workforce, and where the peasants are entirely superfluous sacks of flesh and blood.

In this looming world, present ideological formations are laughably out of date. Marx never anticipated a hamburger-flipping C-3PO—and nor did Milton Friedman. We will need to find new means to subvert old structures, and entirely new economic models to sustain the billions of people bodyslammed out of factories by gleaming pieces of metal and carbon fiber. We’ll need to be very brave in the coming brave new world. Technological innovation will demand political innovation. The first is subject to Moore’s Law. The second is subject to Murphy’s.