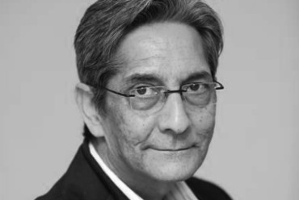 Achmat Dangor, a writer by vocation, was also a political activist from a young age. Dangor was a founding patron of The JRB’s, joining our publication in 2017. He died in 2020; read The JRB’s obituary here.

During the turbulent 1970s, Dangor together with 13 other writers, founded a group call Black Thoughts. Its mission was to overcome the rigid education system the apartheid government had imposed on black schools, forcing children to learn in Afrikaans, and severely restricting what they could read. Black Thoughts did readings in township schools and churches, introducing scholars and the public to the work of ‘Third World’ writers, included South African books that had been banned.

The Black Thoughts writers themselves were banned by the Apartheid government, which prohibited them from attending any gatherings. Achmat found employment under the Leon Sullivan code with the American company Revlon, where he was trained as packaging engineer. He subsequently entered the development sector where he was CEO of various organisations, including the Kagiso Trust, the Nelson Mandela Childrens Fund and the Nelson Mandela Foundation. He was also Director of Advocacy at UNAIDS, and the Ford Foundation’s Southern Africa Representative. He continued writing throughout the years. Now retired, he is devoting himself to his writing.

Dangor’s 1998 novel Kafka’s Curse won the Herman Charles Bosman Prize, and his 2001 novel Bitter Fruit was shortlisted for the IMPAC Dublin Award and the Booker Prize. (Read an excerpt here.) In 2015 he received a Lifetime Achievement Award from the South African Literary Awards (SALA).

His latest novel, Dikeledi: Child of Tears, No More, was published by Pan Macmillan in 2017. The JRB published an excerpt from a work in progress of his in 2018.