The shortlists for the 2019 Writivism Short Story Prize and the Koffi Addo Prize for Creative Non-fiction have been announced.

The Writivism Short Story Prize has been awarded annually since 2013, for ‘brilliant short fiction by emerging writers living on the African continent’.

The Koffi Addo Prize was founded in 2016, and is awarded annually for ‘outstanding non-fiction by emerging writers living on the African continent’.

Each of the shortlists is made up of three stories, and this year one writer, Frances Ogamba, features on both, which the prize calls ‘a true mark of their excellence as a writer considering both prizes had different judges’. 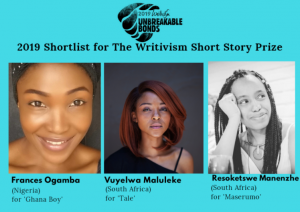 Notable Mention: ‘There is Goodness Waiting at Home’ by Temitope Owolabi (Nigeria). 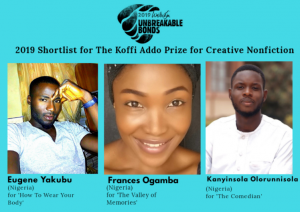 All shortlisted writers will receive $150 and travel to Kampala, Uganda for the Writivism Festival, happening from 15 to 18 August, 2019 at The National Theatre, where the winners will be announced.

The two winners will each receive $500 as well as the chance to work on their manuscript during a one-month residency at Stellenbosch University in South Africa.

The longlisted stories will be published in the 2019 Writivism anthology.