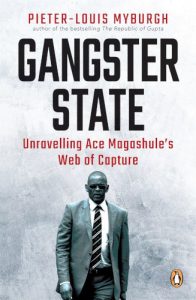 Elias Sekgobelo Magashule, who once taught English and Bible Studies, rose to political prominence during the second State of Emergency, when the original leadership of the United Democratic Front had been dispersed by arrest warrants and detentions. He claims to have smuggled money for uMkhonto weSizwe, although the evidence is contested. In 1989, fearing for his life, he fled to Lusaka and found shelter in the house of Chris Hani. Magashule remembered Hani as a mentor but he was soon expelled for his habit of bringing strange women through the doors. It was the first of the many reversals in a career charted in Pieter-Louis Myburgh’s new book, Gangster State. The question of how a man could be disowned, year after year, yet rise to control a province, and shape a country, goes to the heart of the society that has emerged in South Africa. What made Ace Magashule the subject of constant repudiation and yet, like Jacob Zuma, irresistible?

When he returned to the country after Mandela’s release Ace managed to divide the African National Congress (ANC) in the Free State. One part, based in the southern part of the province, owed allegiance to him. The other part, variously headed by Mosiuoa Lekota, Winkie Direko and Beatrice Marshoff, was based in the north and derived its power from its connection with national leadership. Myburgh quotes an axiom of the neo-patrimonial ANC—‘If you control enough branches, you control a region. If you control enough regions, you control a province. And if you control a province you get a seat at the big table’—without pointing out how long it took Ace to go from branches to ‘the big table.’ In 1990 the ANC chose Lekota to serve as provincial premier, although the Ace bloc proved its numerical predominance at the end of the same year. Eight years later Ace was installed as chairman in an election which drew attention for apparent manipulation of the voting process. One of Myburgh’s informants recalls ‘this old lady [who] told us that if her dead son was still haunting branch meetings, he could at least pop in at home to greet his parents.’

Despite the size of Ace’s constituency, Thabo Mbeki overlooked him and selected Winkie Direko to fill the premier’s position in 1999. In 2002, underlining his potency and the ineffectiveness of intervention from the centre, Ace defeated Direko in the race for party chairperson. Two years later Mbeki filled the premier’s position with Beatrice Marshoff. As with Zuma, Ace drew on considerable political power to outrun his dubious activities. Marshoff removed Ace from the Free State cabinet when she discovered he had ‘instructed staff members at the [Glen College of Agriculture] to slaughter the college’s calves … The meat parcels were meant to be distributed among ANC members … so that they would vote for Magashule’s slate … The police managed to intercept three Department of Agriculture bakkies that were full of meat parcels and that were on the way to Sasolburg.’

Zuma and Magashule understood power in the new South Africa far better than Marshoff and Mbeki. It grew out of glad-handing, pressing the flesh, literally seizing and distributing the meat from the College of Agriculture. The line between crime and lawful conduct had seemingly vanished. (Jackie Selebi served as Mbeki’s commissioner of police, it bears recalling.) All that remained was to bring the country’s institutions into alignment. Magashule was cautious about Zuma at first but found common ground in disbanding the Scorpions in 2009, accusing ‘the crime-fighting unit of being prejudiced against black people’. According to Myburgh, the Scorpions were about to arrest him. The destruction of the anti-corruption unit set the stage for the catastrophe of state capture, but the casting of the law, the police, and the modern economy as anti-black—a tenet of faith held mutually by the Economic Freedom Fighters (EFF), the ANC’s Zuma faction, and the academic ultra-left—is likely more dangerous in the long run.

In May of 2009 Ace Magashule was finally installed as premier of his province. Myburgh provides useful information on the reign of ‘Mr 10%’ (of everything). Government contracts were redirected to friends, family, and cronies, including what seems to be a twenty-five-year-old girlfriend. Development funds bought ‘funeral parlours, a pharmacy, and a car dealership’. Public housing initiatives were sidetracked by corruption and mismanagement, the backstory to the tragic police killing of Andries Tatane. (Tatane was protesting against the lack of available housing in his Free State town of Ficksburg.) Myburgh notes that the national focus on Zuma obscured provincial maladministration. He exaggerates, though, by calling his subject an equal partner with Zuma in Gupta favouritism, although Ace certainly facilitated Saxonwold business, sending one son to work for the family and connecting them to his bureaucracy. In what could have been a disastrous miscalculation, Ace threw his support behind Nkosazana Dlamini Zuma in 2017. Having what used to be called the luck of the Irish, he emerged even stronger as the ANC’s national secretary-general. Will he survive the publication of this book?

In terms of writing and editing, Gangster State improves considerably on Myburgh’s previous effort, The Republic of Gupta. It makes available the fruit of Myburgh’s assiduous research, although it unnecessarily tends to sensationalism—and has difficulty, in parts, extracting and presenting the essentials of the case against Ace. Myburgh does not distinguish clearly, for example, between political murders in which members of Ace’s circles were the victims and those which he may (or may not) have been involved in commissioning. Moreover, he paints Ace as an outlier when a glance at any newspaper shows you that misuse of public resources and crony capitalism is the rule, not the exception, on the continent. Versions of Ace’s wealthy supporter Mike Mokoena—‘My life is to tender!’—can be found in any town in the country, filling out a black upper class fatefully tied to the state and party by government contracts. Unrestricted tenderpreneurism, along with destructive unionism, has spread economic devastation and created one of the world’s gravest unemployment crises. The country seems to be unable to learn from its setbacks. The Medupi and Kusile power stations have rightly been called the greatest single economic disasters in South African history, thanks to mismanagement, lack of capacity, and corruption, yet the government has hardly reflected on whether it can manage the far trickier challenge of transforming the health care system, to take one example.

The most visible element of the regime of Zuma and Magashule was lawfare, or the use of law enforcement and state security agencies to remove honest public servants and cover up dreadful crimes. The charging of Pravin Gordhan with fraud was one example; Myburgh adduces another: the wife of Noby Ngombane, a murdered rival of Magashule, was arrested for her husband’s killing while his body was exhumed and X-rayed in search of the murder weapon. (Charges were later dropped.) If lawfare has ended under Cyril Ramaphosa, it has left us with the disturbing insight that it is not, as Myburgh has it, that the ANC has been criminalised, but that our society has been criminalised wholesale, from the taxi rank to the Stellenbosch board room. Magashule’s rise, despite all the negative verdicts on his character and talents, reveals the weakness of the centre. The trouble is general. Water, electricity, schools, roads: a handful of men and women past retirement age stand between us and the collapse of these basic elements of living.

From a certain point of view, the way President Ramaphosa accumulated his fortune, in a corporate giveaway, is hardly different to the way the Magashules, the Zumas, the Survés, the Watsons, and the Guptas made their way to riches. The last decade of state capture has been an experiment in doing away with such fragile distinctions between legal and illegal, public and private, transparent and secretive, and even, at universities, between persuasion and violence. The results of the experiment are to be read in the travails of a people who, as a recent report put it, have suffered as much as from a major war. Julius Malema and the EFF, Black First Land First (BLF), the remnants of the Zuma faction, and extremist advocates of land confiscation and decolonisation want the same people to suffer from the same experiment twice. The likelihood is that they will be able to carry it out.

For the moment, the publication of Gangster State—along with its reception, including the protests at the book’s launches, the malicious piracy campaign against it, and the threatened book burnings—creates a political puzzle for Ramaphosa: what to do with highly compromised party members like Magashule, Deputy President David Mabuza and deputy secretary-general of the ANC Jessie Duarte? Their individual fates may not matter. But they, or their successors, will outlast him. The president had better have a succession plan.