The JRB presents an excerpt from Mubanga Kalimamukwento’s forthcoming novel, The Mourning Bird.

The Mourning Bird, which was the winner of this year’s Dinaane Debut Fiction Award, will be published by Jacana Media on 1 June 2019. 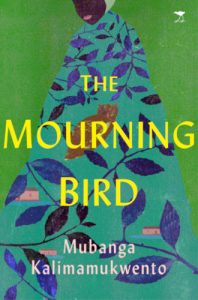 The Mourning Bird is the story of a Zambian street kid turned prostitute, told through the eyes of Chimuka Grace Mwiya.

Following the deaths of her parents from Aids and suicide, Chimuka is forced to live on the street and later resorts to prostitution as a way to survive.

The Mourning Bird is set in the 1990s, Lusaka, and explores the Zambian psyche in times of death, political instability, economic change and growth. Chimuka’s experiences expose the paradox that is Zambia. A country that boldly declares itself as a Christian nation and hub of peace and yet neglects the children who stand witness to decades of poor political decisions that led to increased unemployment, a failing health system and the unspoken stigma lived by victims of HIV.

I was learning that adults had two different sides. They showed the one that suited them at the time. I had come to accept this about my parents and other grown-ups I had known, except Bo Sitali. In our home, in Tate’s house, Bo Sitali was a patient teacher; she spoke slowly and rarely. Her words were kind and often funny. Between her broken English and thick siLozi, she often clashed with our mother, who found her to be too lazy and too slow and reminded her of these flaws many times. Bo Sitali cooked as many meals as Ma did, helped us get ready for school and agreed to play with me when I knocked off. Any game of my choice. Usually it was ciyato, after she finally taught me how to play. When she first came to our house, her skin was a deep, rich brown, smooth and even, and when she smiled, her teeth nearly sparkled against her black lips. She did not like to pray, not the way Ma did anyway, but agreed to go to church with us every Saturday and learnt the siLozi version of the songs we sang at church, even though she could not read. Her voice was deep and masculine, but when she laughed, it turned into a squeal. I became comfortable enough to call her my friend, though she was Tate’s youngest sister and, therefore, my aunt. It came as a surprise therefore that when we moved to her house, she was unrecognisable. She didn’t play games or laugh effortlessly. She showed no interest in my stories and had no patience for me. She was serious and busy, like all the other women I knew, like Ma. And her skin. She had bleached it a shade that had no colour, not quite orange, not quite brown, like an orange, hesitant to ripen—a sorry replacement for the rich, delicious black that adorned her before; only her knuckles stayed stubbornly dark, refusing to deny their former beauty.

My initial excitement about moving with her after Ma died quickly waned and I replaced it with an aching for my mother that I didn’t think possible until I had to nurse it every night. The Bo Sitali who was called Bamake Limpo—Limpo’s mother—by her neighbours, and Bo Ma Limpo (Limpo’s mother) by her husband, was a different one from the one I had grown up with. She had lightened her skin, but her knees and knuckles stayed dark, chocolate brown. She clicked her tongue and talked loudly with the other women in her neighbourhood. She gave sharp answers to my questions and reminded me as often as possible that her home was not my father’s house and I was to follow her rules.

That was not the first lesson we learnt though. The first lesson was that the stove was for decoration. On my second morning there, reeling from the whipping of the first night, I woke up before the cock crowed. I was going to cook Limpo some mealie-meal porridge for breakfast. As I forced the window open and pushed the curtain aside, I noticed Bo Humphrey hadn’t returned that night. He didn’t touch me at night, not when Bo Sitali was there, so I don’t know what prompted my asking.

‘Where is he?’ I wouldn’t let his name touch my lips.

‘Oh,’ she answered casually, ‘he had some work at the school, and they had to prepare for an event.’ She faked a yawn. It was the calmest she had spoken to me since I arrived.

‘Oh,’ I said, picking a pot and placing it on the stove. ‘Okay.’ The morning light was shining through the open window.

‘He has a very important job now, and he is in charge of all the maintenance at the school.’ She bit the corner of her lip. I smiled and nodded. She bit her bottom lip when she lied.

I opened the door for some light and tried the switch on the stove, but it wouldn’t come on. Limpo had already started to stir when I woke up from the reed mat at the bottom edge of the mattress where Bo Sitali slept. My fiddling with the stove brought some plates on the table crashing down, and Limpo finally woke up with a harrowing howl, drowning out the crowing chicken outside. Sunrise.

‘Ah. What are you doing?’ The second Bo Sitali was showing now.

‘Bayasha bwanji stovu iyi?’ I replied. How do you switch on this stove? I had already completed my sentence before realising my mistake.

‘IsiLozi only here. Bo Ndate Limpo will be home soon.’ She was shouting as she jumped out of her covers, using her mother’s chitenge to wipe down her runny nose. I froze and waited for her to hit me, but she didn’t.

‘How do you switch on the stove?’ I repeated in broken up siLozi. Limpo continued crying.

‘Ah you, just come outside so that we can start the brazier,’ she answered impatiently, pushing past me into the sunlight. Outside, call boys were already calling for customers to get onto their buses. Limpo continued to scream. She stayed in the house and hovered near the plates, hoping for something to eat. When she found nothing, her whimper turned into her shrill wail, which attracted a bang on the wall from a drunken neighbour who was trying to sleep. I carried her outside. My shushing was useless until her father staggered in through the front gate, back from his overnight drinking spree. She fell silent and tucked her head into my back when she saw him and pretended to be asleep.

The second lesson at Bo Sitali’s house was: never talk back at Bo Ndate Limpo unless he spoke first. The experience came shortly after Bo Sitali said to me one day, ‘Start the fire Chimuka.’ Bo Humphrey had spent another night out and was snoring in the house. The base sound broke the chirping of the birds nearby. Bo Sitali no longer told the lie about where Bo Ndate Limpo spent his nights. The smell that accompanied his arrival in the mornings told the tale. Every time he did it, though, she became more and more irritated at me but mostly said nothing to me.

‘Okay,’ I said with a nod, tying the wrinkled chitenge tightly around me. Limpo was sleeping on my back. I knelt over the small, metal brazier and started to arrange the charcoal. The snoring stopped, and he emerged from the house quite suddenly.

‘Cook me some nshima,’ he said in siLozi. He was still slurring as he would at that time of the morning. He kept his gaze on me as he spoke.

‘The baby is hungry. I have to make the porridge first,’ she replied without looking at him. Before we’d moved in with them, I hadn’t noticed his bloodshot eyes before, or how his hands quivered non-stop.

‘Give her the porridge from the nshima.’ His voice was low and threatening.

‘She needs groundnuts in the porridge. I have to let them cook first before …’

He stopped her chattering with a slap across her plump face. Limpo screamed and slid down my back. A cloud of dust blew across the yard as the tension rose and the wind blew down some leaves. I held my breath.

‘I. Told. You. To. Cook. Me. Nshima.’ A slap accented each word, vibrating in the air, daring someone to stop them. One. Two. Three. Four. Five. Six. Seven. The sound made the world silent, closing out the heckling women and the laughing children and the powerful motorbike engines. Somewhere in the middle of it, I started to cry and so did Ali, who, for the first time since his escape, was visiting when both Bo Sitali and Bo Ndate Limpo were home. Ali looked the other way and kicked a stone at the rusty gate. When it was over, life continued. The drunk from next door was dragging on a cigarette and listening to the radio. A skinny, black chicken clucked in the corner. A woman carried a metal wash basin into the bathroom singing: ‘What the Lord has done for me, I cannot tell it all.’