The JRB presents an exclusive excerpt from Yellowbone, the forthcoming novel by Ekow Duker. 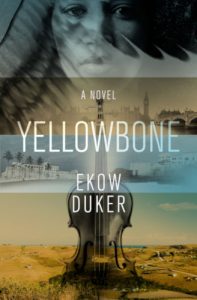 Yellowbone will be published by Kwela Books in March 2019.

The minute you saw Karabo’s father, Kojo Bentil, you knew at once he was a school teacher. He wore short-sleeved shirts with a raft of pens in his top pocket and had a patient, slightly repetitive way of speaking. He had arrived in South Africa from Ghana in 1989, eleven years before Karabo was born.

Everyone called him Teacher, even Karabo’s mother, Precious. As a child, Karabo marvelled that, with so many teachers in Mthatha, her father was special enough to have appropriated that particular name for himself. He was a permanent fixture in the Grade Twelve classroom at Mathanzima High School in Mthatha. The children used to joke that if Teacher took his shirt off, there’d be a stock-keeping number stencilled in black ink across his back. That Teacher might be absent from class for one day would have been more surprising to them than if they were to find their desks spray-painted in the ANC yellow, green and black.

Teacher taught mathematics and he practised it wherever he could. At the supermarket he’d calculate the bill in his head long before the last item had been scanned. Then, with a bashful smile, he’d hand over the exact amount in notes and coins to cries of amazement from checkout girls and shoppers alike.

It didn’t matter whether the Bentil family basket contained only one loaf of bread and a tin of floor polish, or if they had filled an entire trolley with groceries, an event that didn’t happen very often. Teacher was just as proficient with his sums, regardless of how many items they’d bought. People would follow Teacher around in the supermarket, creeping and chattering behind him in soft, animated voices, eager to see his prowess in mathematics for themselves.

Karabo’s mother, though, was much less inclined to applaud. She muttered darkly about Teacher showing off or, worse, she accused him of showing her up. She had stayed at home after Karabo’s birth and had only gone back to work when her daughter was much older and could look after herself. She said it was their fault, Karabo and Teacher’s, that she couldn’t do sums in her head.

Teacher would tell Karabo stories at night, smiling happily when her eyes grew wide with wonder. Once he’d told Karabo how his father’s tribe in what was then the Gold Coast, collaborated with the Europeans to sell his mother’s people into slavery.

‘What is it?’ Teacher asked when he saw Karabo frown.

‘Nothing,’ she said. But the thought troubled her for several days after that. She simply could not imagine Paa Kofi, her Ghanaian grandfather, whipping her grandmother across the face before dragging her off in chains to be sold. It was more likely to be the other way around.

Karabo had never been to Ghana but her grandparents had travelled to South Africa to visit on exactly three occasions. Karabo remembered each visit distinctly because each time her grandparents came Teacher spoke less than before. It was as if the dial that controlled his speech had been turned deliberately counter clockwise until it couldn’t go any further. And after they left, Teacher’s reticence would intensify until he only spoke in monosyllables, if he spoke at all. This would last anything from a few days to a couple of weeks. But there was another reason Karabo remembered her grandparents’ visits so clearly. For whenever Paa Kofi and Ma’ama came to visit, they seemed to talk incessantly about her.

The day of her grandparents’ first visit to South Africa, Karabo was playing outside when she saw Teacher’s faded blue BMW crawling towards their house. She ran excitedly behind it as it pulled into the yard. It came to an untidy stop with a loud clanking of gears as Teacher wrestled it to a standstill. Earlier that day Teacher had washed the car more thoroughly than usual and checked the oil and the tyres. But not much could be done to improve the loudly protesting engine that was only capable of propelling the vehicle at about twenty-five kilometres per hour. On family outings Karabo and her parents would drive around Mthatha at a dignified pace, overtaking donkey carts with the greatest difficulty. Not only could the car not go very fast, it couldn’t go very far either. Not unless Teacher opened the bonnet and coaxed a few extra kilometres out of it with the help of a screwdriver and a muttered prayer.

At least Teacher had made it home with his parents that day and as he drove in, he revved the engine for Karabo’s benefit because he knew she liked it when he did that. Then suddenly, everything went quiet. There was no sound at all save for the clink of overheated metal and the Cape buntings calling out to each other in the trees. Then the passenger door creaked opened and a dark hand swathed in brightly patterned cloth gripped the window’s edge. Karabo’s grandmother emerged from the car, slowly, like a moth from its cocoon. Karabo was already sidling away when Ma’ama’s darting eyes came to rest on her face. She must have seen pictures of Karabo before but a look of astonishment flashed across the old woman’s features. It was as if she’d walked into her bathroom and found a stray dog perched on her toilet seat.

By then Teacher was out of the car.

‘Karabo,’ he said. ‘Come and greet your grandmother.’

Ma’ama recovered beautifully. She fussed over her outfit for several moments before bending down at the knees to peer at Karabo more closely. Ma’ama’s blouse, the heavy pleated skirt and the wrapper she wore on her head were all cut from the same decorated cloth and the ensemble made for a spectacularly colourful display. Karabo tried unsuccessfully to hide the mud stains on her shorts and T-shirt while stealing glances at her grandmother. To her, Ma’ama was an exotic bird that had lost its way and somehow wandered into their house.

Growing up in Mthatha, light­skinned Karabo is called ‘yellowbone’. She often hears her parents argue, not realising her complexion, and questions surrounding her paternity, is the cause. People expect ‘exotic’ Karabo to coast through life on her looks. But she has high aspirations and goes to London to study architecture.

When Karabo is invited to a private recital, a priceless antique violin binds her fate to that of virtuoso André Potgieter who came to London to hide his secret—though no saint, he sees angels when he plays a beautiful piece of music. Whether it is synaesthesia or something otherworldly, he cannot say. All he knows is that he would do anything to keep seeing the engele, but these days they rarely come to him.

Events on the night of the recital cause Karabo to run away to Ghana to the refuge of her father, but her plans go horribly wrong. And André soon follows for his own selfish reasons.

Enthralling and powerfully written, Yellowbone is a tour de force.

Ekow Duker, who is a member of The JRB’s Editorial Advisory Panel, has worked as an oil field engineer, investment banker and corporate strategist. His current work is in data analytics in Johannesburg. White Wahala, his debut novel, was a finalist for the 2011/12 European Union Literary Award. White Wahala and Dying in New York were published in 2014 and The God Who Made Mistakes in 2016.