Read an excerpt from The First Safari: Searching for François Levaillant by Ian Glenn, out now from Jacana Media! 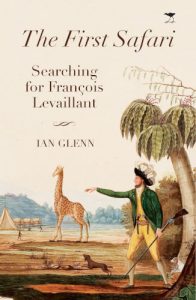 The First Safari tells how, for a quarter of a century, Ian Glenn searched for Francois Levaillant’s notebooks and the fate of his collection and tried to solve puzzles and mysteries of Levaillant’s life and times.

Levaillant was the first and greatest South African birder, noted ornithologist, explorer, naturalist, zoological collector and anthropologist of the Cape. He collected thousands of specimens of birds and subsequently published the six-volume Histoire Naturelle des Oiseaux d’Afrique between 1799 and 1808. His contribution to ornithology in Africa was immeasurable, and some of his specimens still exist in museums in Europe.

This book is intended for would-be researchers, for people wondering why writers as various as Nicolas Chamfort, Karel Schoeman, JM Coetzee and Michel Leiris admired Levaillant, for teachers looking for a new start for South African literature and for people interested in the bush or birding who want to know why Levaillant was our greatest naturalist.

The famous King’s Map that Levaillant inspired for King Louis XVI is also included in the book.

Ian Glenn has edited and co-translated an English translation of Levaillant’s Voyage into the Interior of Africa for the Van Riebeeck Society and co-authored the Brenthurst Press edition of François Levaillant and the Birds of Africa. He has written or co-authored many scholarly articles on Levaillant and curated the King’s Map exhibition at the Iziko Museum in 2012–2013.

Chapter I
Suriname and the making of the collector 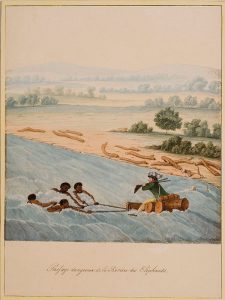 Our hero was born François Vaillant, in Paramaribo, then part of Suriname or Dutch Guiana, to French parents on 6 August 1753. His father, Nicolas-François Vaillant, and mother, Catherine-Joséphine François, had eloped there because his mother’s father accused Nicolas of kidnapping his daughter and they had to leave France. The father came from a well-off bourgeois family from Metz in northern France, where many members had worked in legal professions. He had himself trained in law and acted as a king’s counsellor in France. In Guiana, he started a business, trading in natural history specimens, and acted as honorary French consul.

Levaillant described his childhood in Suriname and how it helped shape his later career in the introduction to Travels into the Interior. He grew up surrounded by an equatorial wilderness where he followed his parents on collecting expeditions and became obsessed by birds. He learned to hunt them with blowpipe and Indian bow and arrow and felt that ‘this taste was turning into a passion, a powerful passion that even troubled my hours of sleep and that the years have only made stronger’.

But he also attributed his desire for adventure and apparent indifference to social norms, to his upbringing. When he returned with his parents to France in 1763, and ‘neared the frozen climes of the north, a profound sadness attacked my soul and dissipated the glamour of the future’. How did this childhood in a Dutch colonial slaveholding culture help him in the Cape? Firstly, speaking and understanding Dutch enabled him to communicate with local farmers and the Khoikhoi (or Hottentots) working for him. It may also have been that growing up in a colony under Dutch commercial influence led his family to having connections that were to prove invaluable when it came to getting permission from the Dutch East India Company to travel to the Cape.

What were the costs and benefits of growing up ‘creole’—French but foreign, of the foreign house (‘creole’ stems from the Portuguese ‘corral’—South African ‘kraal’)? When I started working on the reception of Levaillant’s travel writings, an early and important find was the publisher’s publicity notice, or ‘prière d’insérer’, in the Journal Encyclopédique. It stressed the importance of Levaillant’s glamorous status as outsider. The publishers treated Levaillant as somebody who was an outsider to France and the Cape, able to comment with disinterested detachment.

Levaillant was thus able to play a kind of cultural chameleon role—was he French, Dutch, none of the above? His uprooted childhood gave him, he says, a kind of coldness, perhaps born of uncertainty and a complex double identity. He made fun of the French unwillingness to travel, comparing it to a mussel’s attachment to its rock,but he himself was torn. He longs for France at several points in his travel writing but in France he longs to be back in the African bush round the campfire. In his later life, he planned to return to Africa—either for a further expedition, or for good.