As part of our January Conversation Issue, The JRB Editor Jennifer Malec talks to Chigozie Obioma about his forthcoming ‘African cosmological novel’, An Orchestra of Minorities. 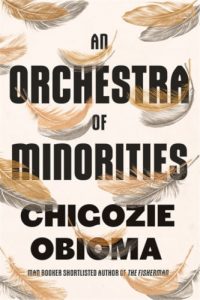 Jennifer Malec for The JRB: You’ve described your first novel, The Fishermen, as being about brothers and family drama. In interviews over the past couple of years you’ve described An Orchestra of Minorities as a love story. Was this your central intention, to write a love story?

Chigozie Obioma: Yes, I think it was my central intention. When I was in North Cyprus, I met a man who had been swindled by supposed agents, who told him that Cyprus was Europe where very auspicious possibilities lay in wait for him. This man, JK, was broken when, upon reaching North Cyprus, he found that he’d been deceived and that he had simply wasted his money—all he had. A few days after he came to Cyprus, he would be found dead, having fallen from the attic of a four-story building. It was in the aftermath of his demise that I began to contemplate a detail he’d given me: that he had been engaged and that that had been the primary motivating force for his coming to Cyprus. I began to wonder what may have happened to that woman, what she may have made of his sacrifice. This was where the story was birthed.

The JRB: You’ve said An Orchestra of Minorities was also inspired by the lack of an African cosmological novel, in the vein of Milton’s Paradise Lost or Dante’s Inferno, which I think relates to one of the novel’s epigraphs: ‘If the prey do not produce their version of the tale, the predators will always be the heroes in the stories of the hunt.’ Could you talk a little about why this idea was important to you?

Chigozie Obioma: I just thought at some point someone needed to do something like that for one of the African civilisations that once existed—and still exist in partial forms today. I wanted to document the core principles of the Igbo worldview in book form for those who might be interested, and for generations of Igbo people now and for the future.

The JRB: How difficult was it to do research into Igbo spirituality and cosmology? What kind of research did you do?

Chigozie Obioma: I read nearly everything that has ever being written about odinani, the Igbo cosmology, and philosophy. I also sent my Dad to do field work. I also did some interviews, asking those who might know anything about the culture what they thought. The difficulty was in synthesising the wealth of materials on the topic. Scholars and Igbo intellectuals are divided on the chi, its qualities and properties. I had to come up with a unified set of qualities and apply this to the chi in this specific book.

The JRB: The novel is narrated by the chi, or guardian spirit, of Chinonso, the protagonist, and I think the character of the chi is one of my favourite aspects of the book. He is so enchanting. What were the challenges you encountered by having a chi narrate the novel? How did you, as they say, ‘get into the mind’ of a chi, who is not bound by a human concept of linear time?

Chigozie Obioma: There were several challenges. First, the chi is a spirit whose abilities are varied, and various people believe different things about it. But when I found certain common ideas about it—that it does not often seek to compel man against his will—I became more at liberty with constructing the chi as the narrator. At a craft level, I knew the chi would subvert what we know of the ways in which a story might be told: namely the first, second, and third person points of view. When the chi is within the host, it speaks in the third person perspective, and sometime even in the second person. And when the chi is outside of the host on its own, it narrates in the first person. This was not very easy to construct. But also, I wanted to use the chi’s reincarnation and therefore long existence to thread through landmarks of Igbo history—slavery, contact with Europeans, colonialism, the Biafra war—and to, in essence, give a brief history of the Igbo civilisation. Hence, you have the chi recalling various hosts in times past of as far back as four hundred years.

The JRB: You’ve described Igbo philosophy of being ‘a dialectic between free will and destiny’, which is something you explore movingly in the book. I’m wondering if your decision to end the book on a tragic note was influenced by the clash of these ideas, free will and destiny?

Chigozie Obioma: In a way, yes. But the reason why it does feel like there’s so much tragedy is, I think, because of the subject matter. I see myself as an ontologist and when I consider subjects like free will, fate, and the metaphysics of existence, I find that what you always happen upon is often deeply dark. But it is also because of the story of JK, which inspired the novel—his story is tragic. Yet, I feel that there is redemption. The chi might be mistaken, perhaps Ndali doesn’t suffer the fate it thinks she will suffer. Perhaps Chinonso is reconnected with his chi afterwards and owns something.

The JRB: Your books do not shy away from the philosophical, but at the same time you don’t neglect your characters. Chinonso, Ndali, Jamike, these are all extremely complex and unpredictable people. How do you develop your characters? Do you worry about ‘likeability’?

Chigozie Obioma: I believe that the shape of a work of fiction should be at least triangular—the personal story, the general commentary (which would include the themes), and the conceptual dimension (which deals often with the shape and structure of the work). Hence, yes, I focus on everything, starting from the personal story of plot down to the complexities of the philosophical. That said, yes, I hope that readers love the boys in The Fishermen. I believe they do and this is why the novel has moved quite a number of people, as well as audiences who have seen the stage adaptation. I also hope that people will be moved by Chinonso, a deeply complex character who is changed from being a generous, lowly man to a deformed individual. The trajectory of that change, to my mind, is deeply human.

The JRB: You’ve said that The Fishermen could not have been written if you had been living in Nigeria. An Orchestra of Minorities was inspired by your time in Cyprus, but seems to complicate Nigeria and what it means to be Nigerian more intensely. Was this something you intended?

Chigozie Obioma: Yes, but it does follow the same logic: I couldn’t have written An Orchestra of Minorities if I hadn’t left Cyprus.

The JRB: Was there a reason you decided to set the novel’s Nigerian sections in Umuahia? A nod to the famous Government School at Umuahia, where literary luminaries Chukwuemeka Ike, Chike Momah, Elechi Amadi, Christopher Okigbo and Chinua Achebe met and became friends?

Chigozie Obioma: This is a very clever thought, but no, I wasn’t thinking of those who have lived there. I wanted to set the story in the land of ‘the great fathers’, to quote the chi, and Umuahia is one of them. Umuahia is also in some ways my hometown, even though I was born and grew up in Akure. I return to Akure in my next novel.

The JRB: You’ve mentioned that one of your central concerns in writing An Orchestra of Minorities was to explore whether revenge is justice, an idea echoed in Cry, the Beloved Country by Alan Paton—a book you’ve named as a favourite. As a South African I’m interested to hear where you first came across Cry, the Beloved Country, and what you enjoy about the book?

Chigozie Obioma: Yes. Had JK been alive, I keep thinking, what would he have done to the man who wounded him so much? Perhaps he’d have sought revenge? I came by the novel in Cyprus, I think. I can’t recall how but the title spoke to me and I read it. There is a certain elegiac tone to the book and a vascularity to the emotional depth of the characters. And Paton is also intensely philosophical, as you can see in the line I quoted to the New York Times: ‘I have one great fear in my heart, that one day when they are turned to loving, they will find we are turned to hating.’

The JRB: Apart from Amos Tutuola’s The Palm-Wine Drinkard, I believe your foundational reading, from your father’s bookshelves, were books from the Western canon, such as the Greek classics and Shakespeare. When did you discover African literature at large, and did that reading reshape your literary worldview?

Chigozie Obioma: My father also later bought me books by Achebe—Arrow of God and Things Fall Apart—along with The Bottled Leopard by Chukwuemeka Ike, The Passport of Mallam Ilia by Cyprian Ekwensi, Chaka the Zulu by Thomas Mofolo and many of the common classics of African literature. So it was around the same time, but the Shakespeare books were greater in number, by a single author. It would be years before I would read a third book by Achebe, The Trouble With Nigeria, and then his other novels.

The JRB: Your second novel originally had the working title The Falconer, if I’m not mistaken, but from how you described it, it seemed a very different story, set partly in the mid-nineteenth-century, when Africans were first coming into contact with Britain, and with a specific focus on a falcon. Did the novel evolve a great deal, or can we yet expect The Falconer?

Chigozie Obioma: Wow, so interesting that you went that far back! That novel I mentioned was rested in favour of An Orchestra of Minorities. It is still in the works and could appear next.

The JRB: Finally, you are a voracious reader, and we are always looking to discover new favourites. Do you have any recent reads you’d recommend?

Read More
‘Writing is open to everyone, regardless of…
July 14, 2022 No Comment

One thought on “[Conversation Issue] A brief history of the Igbo civilisation, and a love story—Chigozie Obioma chats to Jennifer Malec about his new novel, An Orchestra of Minorities”