Lola Shoneyin spoke to Shayera Dark about the fifth edition of the Aké Arts and Book Festival, which took place in Lagos from 25–28 October 2018 under the theme ‘Fantastical Futures’.

Shoneyin’s debut novel, The Secret Lives of Baba Segi’s Wives, won a PEN Oakland/Josephine Miles Literary Award and the Ken Saro-Wiwa Prize for Prose, and was longlisted for the Orange Prize for Fiction. In 2014 she appeared on the Africa39 List, a project recognising the thirty-nine most promising authors under the age of forty from Sub-Saharan Africa and the diaspora. She founded the Aké Festival in 2013, with the aim of promoting, developing and celebrating creativity on the African continent. 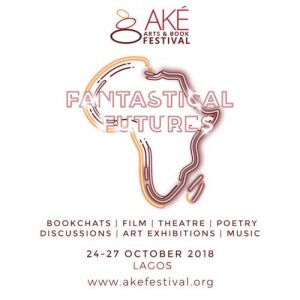 Shayera Dark for the JRB: How did you come up with the theme Fantastical Futures?

Lola Shoneyin: Up until now, previous Aké themes looked into the past. We talk about our discontent with the present and think a lot about the future, but we don’t talk a lot about the future. I believe we need to have lots of conversations about the Africa that we want, but not in the spiritual sense of ‘speaking it into being’. I’m looking at the practicalities, where two or three thinkers get together and talk about the Africa they desire and imagine. In having those conversations, they can start fine-tuning that vision. Also, we’ve had a wave of science fiction and fantasy in Africa, so I wanted us to look at that and broaden the conversation around that sort of literature.

Choosing the theme for the year is the peskiest part of the process. It’s important that the theme captures the mood, and sometimes I choose it after informally confirming which authors will attend the festival.

The JRB: The theme Fantastical Futures invokes the marvellous and the outlandish, in the sense that ideas are unmoored from present realities. Was that the concept you had in mind for the 2018 festival?

Lola Shoneyin: I was trying to kill two birds with one stone. The word ‘fantastical’ conjures something amazing but also out of this world, as in something we’re not touching yet. Something that is almost beyond our imagination. I chose ‘fantastical’ to capture science fiction in literature, the technological advancements and ideas we have that haven’t come into being yet but are being written about. There’s that element of the possibility of getting there.

The JRB: Previous editions of the Aké Festival were held in Abeokuta. Why was it moved to Lagos this year?

Lola Shoneyin: Part of the reason was logistics. We needed heavy security to escort people from the airport in Lagos to Abeokuta, which added to the cost of hosting the event. In Lagos, the airport is ten minutes away from the venue, so we don’t have to worry about the safety of our guests.

The other part was that I didn’t feel that the host state at the time had a clear enough picture of the benefits of hosting the festival in Abeokuta. We were told outright that the venue we were using for seven days, which we used to pay for, was only going to be given to us for three days. It was quite painful because it was clear there was an influx of people to Abeokuta for the festival and hotels were fully booked. Perhaps we weren’t doing enough to earn the moral support of the state government.

The JRB: Some of the book discussions and documentaries at the festival referenced the past, such as the impact of colonialism on indigenous religions and women’s political role in Africa, as well as the Biafran War. Why was it necessary to reflect on the past during an event focused on the future?

Lola Shoneyin: Going into history, having access to some of our mistakes, some of the collisions between cultures, some of the exploitations, but also the advancements, is important. History and the exploration of our past is something that we do at every festival. It’s critical. You can’t plan a future without understanding where you’re coming from. Supporting fiction and nonfiction on historical figures is important, as we’re missing that on the continent, especially with regard to women.

The JRB: At first blush, most of the crowd attending the Fear of Queer panel discussion were largely young, hip and liberal. If shifting mindsets and effecting change is the aim, shouldn’t religious leaders and policy makers be present as well?

Lola Shoneyin: They may not show themselves but of course they are there. It’s difficult to make generalisations about the composition of any audience at Aké Festival. But what I know is that word gets out. Our events are livestreamed. Not one person can win an argument with me about the importance of having these conversations. I’m a fervent believer in dialogue, where I listen to your viewpoint and you listen to mine. We had a panel talking about She Called Me Woman, a book on transgender and queer women in Nigeria. Why would I throw a religious leader into that mix? Some people can if they like, but I prefer it if we can just focus on the topic. If people have issues with the book, there’s plenty of time in the Q and A to speak your mind. So it’s not like I’m hiding from them. They’re welcome to attend.

The JRB: Do you worry the festival is preaching to the converted?

Lola Shoneyin: No, because at every festival seventy per cent of those who come have never been before. And even then, if the place is full of liberals, it’s good for them to find one another, because they can then have their own debates within their strands of liberalism in terms of expanding and fine-tuning their beliefs.

The JRB: There was a huge interest among Aké attendees for the film Rafiki, the lesbian love story from Kenya that won rave reviews at the 2018 Cannes Film Festival and was subsequently banned in its home country. Was your decision to screen it at the festival predicated on the controversy it generated in Kenya?

Lola Shoneyin: Rafiki is a beautiful piece of art. I don’t need any other reason or consideration. Aké is a book and arts festival. If it’s a beautiful piece of art, we want to see it. Nothing else really matters. The fact that it’s about a lesbian couple is another reason to screen it, because that’s humanity. Maybe there’s something viewers would come to understand about the nature of these young Africans in a same-sex marriage that could heal and help them, or help them understand the humanity in others.

Also, by nature, the fact that it was banned was reason enough to want to screen it because I’m against all forms of repression and censorship, and it’s absolutely hideous when government sticks its dirty, stinking, hypocritical nose into creativity. They need to stay out of it. People don’t start painting themselves blue and trying to join NASA after watching Avatar. So why this ridiculous notion that watching a film will somehow ‘corrupt your mind’ and turn you into a gay person? It’s so stupid and people should be ashamed to say that.

The JRB: Speaking of controversy, some wondered why men were on a panel about menstruation?

Lola Shoneyin: When we’re talking about what it means to be a woman, it’s critical that we include men because we need sensible allies. And if you’re going to fight bias and shame, you need to know what’s causing it and why the other side has this opinion. One of the men on the panel, Toni Kan, wrote a story for an anthology called We-Men where he describes in great detail a grown woman who is anxious and afraid to get up because she thinks her period has started and she’s stained. I thought it was interesting for a guy to write on that topic from the perspective of a woman.

The JRB: You mentioned that it has taken four years to bring Somali writer and Nobel Prize in Literature contender Nuruddin Farah, who was the keynote speaker this year. Who is your dream speaker for the next Aké festival?

Lola Shoneyin: There’s a difference between who I want and what’s best for Aké Festival. We have a shortlist, which I can’t share, of people who would be best for the festival. But for me, I’d love to have Toni Morrison because she was instrumental to my career as a writer and I absolutely love her work. That said, just because I have that relationship with her doesn’t mean others will. One has to think about who would resonate best with the Aké audience.

The JRB: What do you hope Aké attendees gained from this year’s festival?

Lola Shoneyin: A greater love of books and appreciation of the arts. I hope they’re better equipped to answer questions about the future that they want for their continent.

One thought on “‘We need to have lots of conversations about the Africa we want’—An interview with Lola Shoneyin, founder of the Aké Festival”