Sally Rooney reshapes our understanding of the ordinary in a manner that invites us to imagine better ways of being, writes Wamuwi Mbao. 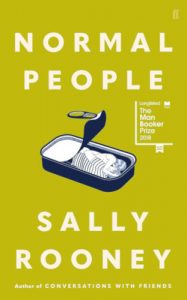 What does a Man Booker Prize novel look like? Have you read last year’s Man Booker winner? Who won it in 2010? The literary award (and its tedious episodes of longlisting, shortlisting and the relief-disappointment announcement of the winner) is both a blessing and a millstone around the neck of the author. It announces that you have written something worthy of consideration by the esteemed of the writing world. It tells everyone that what you have written in your novel is something of which we should all take notice. Literary awards are, despite how nobly they may robe themselves, arbiters of fashion, and fashion has a generally insouciant relationship with merit. So what is awarded is not necessarily the best novel of the year, just what has captured the roving literary eye.

Little wonder, then, that Sally Rooney, whose novel Normal People is the subject of this review, is already being hailed by the foolish as the defining writer of the millennial generation. What they mean by that is that they detect an immediacy and authenticity (the buzzwords drip like artisanal coffee) in Rooney’s writing that might provide some way of answering to the mess we find ourselves in. Her first book, Conversations with Friends, brought life to the typical Jerry-Marcia couple drama, transposing it to modern Dublin. It earned praise from many quarters for an un-literary straightforwardness that risks hardening into a style in her latest book.

Perhaps it is our proclivity for evading boredom that draws us towards new authors and makes them perform their creative restlessness for us as though they were dancing bears. In this regard, books are not like shirts or wallpaper: uniqueness is not the end goal. We want them to tell us something profound about ourselves, and that desire has birthed a certain kind of novel. The Booker-courting novel signals itself easily enough: portentous pursuit of detail; the cart-horsing of historical regrets (however slight) to the present; characters who are motors for the author’s extensive research of a particular time period; and usually fairly portly (did you really read Eleanor Catton’s The Luminaries? All of it?).

Rooney’s novel has none of these base qualities, and it proved thus by not winning the Man Booker this year. It did not even make the shortlist, suggesting perhaps that contemporary Ireland is less interesting post-Troubles. However, that should not be taken as a slight on what is an unusual and evanescent novel. First, let it be said that it has a great title. It expresses without abstraction
what we will be taking up. It’s almost too simple, a rebuke to the self-conscious cleverness of a writing decade under too much pressure to appear interesting.

Normal People takes as its starting point the intertwined lives of two teenagers, Connell and Marianne. We meet them at school, where the oppressive climate of the schoolyard smothers their hesitant romantic attachment. Her dimwitted classmates regard Marianne as weird, and her glassine indifference to their scorn only distances her from the teen economies of popularity and social esteem. Connell is popular enough to feel it necessary to keep his distance from her during school hours. Their after-school friendship blooms in sheltered spaces: first in Marianne’s large house, where Connell’s mother works as housekeeper, then in gradually less private spaces. At the last minute, Connell shrinks away from acknowledging their bond in public, only to discover that nobody seems to actually care.

If this sounds like a reprise of the great British nostalgia-nausea for school as the first contact point with the alienating human condition (think of Grange Hill or Skins), it isn’t. Normal People isn’t as straightforwardly digestible as that, not because it is opaque, but because it uses writerly intelligence to sidestep cliché. Rooney even manages the problem of sex well: she joins an impoverished club of writers who do not stumble where depicting sex is concerned, because she isn’t trying to rehydrate it. Sex in this novel is disarmingly normal, so disarming that it startles initially with its unremarked brevity.

The subtext for this drifting story is something quite hard-edged. Marianne knows that:

…there’s always been something inside her that men have wanted to dominate, and their desire for domination can look so much like attraction, even love. In school the boys had tried to break her with cruelty and disregard, and in college men had tried to do it with sex and popularity, all with the same aim of subjugating some force in her personality.

She is not passively adrift in the mephitic stream of men and their toxic feelings. Her unnerving calm belies a complex interiority:

It depressed her to think people were so predictable. Whether she was respected or despised, it didn’t make much difference in the end. Would every stage of her life continue to reveal itself as the same thing, again and again, the same remorseless contest for dominance?

Marianne is an impressively nuanced character. Her impassive self-possession is as unsettling as it is absorbing. Her weightlessness matches the unelevated prose perfectly. As she and Connell struggle to shrug off the limitations of their small-town world, the novel asks us to think through how their stop-start relationship is shifted and transformed by external as well as internal forces. This is not The Great Financial Crisis Novel, but the world’s venality looms ominously over their lives.

The pleasure of this novel is not in its plotting, but in the elasticity of its prose: it dips in and out of its characters’ lives in an unaffectedly fluid way. The chapters are brief, wandering moments headed by timestamps—from ‘January 2011’ to ‘Seven Months Later (February 2015)’—but this compact story unfurls very much according to its own pace. Rooney has a lovely grasp of what energises storytelling, and she has produced a novel that runs along without its motivating force being visible. It is an airy, cottony writing style, where we are presented with the gambit, ‘How do we think about this?’ rather than the braggadocious, ‘Let me tell you what happened.’

Rooney is not an assembler of glittering sentences, and the novel won’t have you reaching for your notepad to steal bon mots for your own writing. Normal People proceeds by turning an idea over and over, examining it first this way and then that. How do two people communicate their feelings? This basic question is one many novelists have quested after. But while Normal People takes place in the real world, it feels like it is transforming that world into something unusual and strange.

The current writing landscape is a three-ring circus populated with razzle-dazzle novels cheek-by-jowl. Normal People manages the trick of being unadorned, and the better for it. Rooney is a humane writer in the best sense of that word: she reshapes our understanding of the ordinary in ways that invite us to imagine better ways of being.