The Long Take by Robin Robertson is longlisted for the 2018 Man Booker Prize. Here is poet Loftus Marais’s short take on this unusual work of fiction.

His review first appeared in Afrikaans in Die Burger, August 2018. The shortlist for the 2018 Booker Prize will be announced on 18 September. 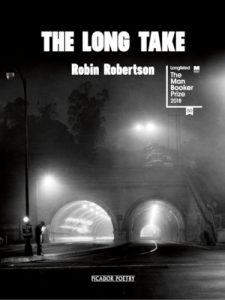 To start off with: this book won’t be everybody’s thing. It is a 220-page poem about a war veteran with a weakness for noir films. It is set between 1946 and 1953. It requires attention and an openness to its strangeness and rhythms. But if you give Robin Robertson the time, calmly sit with the book with a cup of coffee, or even some whiskey (noir, after all), you won’t regret it. You might even end up like me: slightly obsessed, watching old noir films every second night, looking up the histories of beautiful old buildings in Los Angeles, Charlie Parker playing in the background.

In The Long Take we follow Walker. Just Walker. His full name remains a mystery. He arrives in America after World War II. He works at the docks. He remembers his idyllic youth in Nova Scotia, Canada. He also remembers the violence of the war. He suffers from shell shock and post-traumatic stress disorder. He becomes a journalist on a newspaper’s city desk and writes about the fate of veterans and the homeless.

Walker lives up to his name. He walks and looks at the cities he lives in—New York, San Francisco, but especially Los Angeles—like a tormented flâneur. He finds escape in cinema. He loves Yvonne De Carlo in Criss Cross, Orson Welles in The Lady From Shanghai, Peggy Cummins in Deadly Is The Female (later retitled Gun Crazy).

Robertson is known as a lyrical poet with a controlled hand, but with his new book something completely new happens. This is narrative poetry—with jumps here and there into rhythmic prose—but it is also a piece of solid historic research.

The lines move forward with a brooding, threatening energy:

There were parts of the city that were pure blocks of darkness,
where light would slip in like a blade to nick it, carve it open:
a thin stiletto, then a spill of white; the diagonal gash
of a shadow, shearing; the jagged angle sliding over itself
to close; the flick-knife of a watchman’s torch, the long gasp
of headlights from nowhere

And here is Robertson describing an illuminated swimming pool in the night: ‘like the back of kingfisher’—! When Walker looks at his cat, meanwhile, he finds her ‘decanting herself/in one pulse/from the window ledge to the floor.’ Every now and then he shocks you with beautiful lines like these.

The book is marketed as being ‘unclassifiable’ and The Long Take is also on the Man Booker Prize longlist—an honour meant only to befall novels. But don’t be fooled. This is poetry. Good poetry.

Carnival grounds often pop up in noir films. Sometimes a circus organ plays in the background. In one scene in The Long Take Walker walks past one such calliope. But Calliope is also the name of the Greek muse of epic poetry. And the muse was certainly with Robertson when he wrote this book. His poem is a glorious mixture of low and high culture. It is a circus organ of art.

Read More
Poetry by Sarah Lubala, from A History…
December 20, 2022 No Comment