Sierra Leonean writer and 2013 Caine Prize shortlistee Pede Hollist was at the Goethe-Institut in Nairobi in May to kick off the second season of Artistic Encounters, a series of events curated by Zukiswa Wanner. 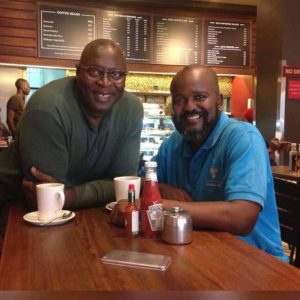 Hollist was paired with Kenyan–Eritrean actress Hana Kefela, who performed an interpretation of his book So the Path Does Not Die. Of Kefela’s performance, Hollist said he was electrified to see her breathe life into his characters.

James Murua caught up with Hollist for a chat.

James Murua for The JRB: Male writers are often said to write women as bland characters without complexity. In So the Path Does Not Die, many discerning women readers have said you wrote your female lead very well and, indeed, many who had read the book in advance were surprised that you were a man. How did you succeed in doing this?

Pede Hollist: It’s kind of you to say I succeeded. I would say that I made a valiant attempt to get into the head and the psyche of a woman based on my own experiences with the women in my life. I also did a lot of research and talked to women to find out what they felt about the particular topics and issues I addressed in the book. So, that—and I suppose what comes with being an imaginative writer, with regards to what the character would think and say in a given situation—all contributed to this product, which I was flattered was well-received.

The JRB: The book starts with Finaba being evacuated from her village to the city after her grandmother attempts to initiate her into womanhood through what some call female circumcision and others female genital mutilation. Do you have an opinion either way on this practice?

Pede Hollist: Yes and no—and I’m not trying to be evasive. I think that the simple, or easy, position to take is against the practice, but that is neither pragmatic nor is it sensible. This is a cultural practice and very few people engage in cultural practices that they understand to be harmful to themselves or to the others in their cultures. What I have tried to do in the novel is to present both perspectives in as clear and concise a way as possible, more so to engender discussion—to add understanding—rather than to take sides.

The JRB: Beyond female genital mutilation, So the Path Does Not Die also delves into Finaba’s ‘American Dream’—she lives in America before returning to Sierra Leone. Do aspects of this part of the book mirror the experiences of Sierra Leoneans you know in the US, or did you have to do more digging?

Pede Hollist: I’m glad that you asked this question, because the audience [at the Goethe-Institut] did seem to focus on female genital cutting, which in the scope of the entire novel is really a rather small aspect. I think I set out with as much of a clear objective as one usually sets out with when writing a novel. I set out simply to record the experiences of African immigrants in the United States. I don’t think I needed to do any kind of formal research to explore that experience, simply because I lived it myself and I basically exist in a community of immigrants, both at work and at home, and in my social life. In the course of those interactions you get to hear many different stories, experiences and opinions and you kind of stitch them together as the narrative winds and unfolds. That’s basically the trajectory. I also thought that it was important as this too is part of the experience: there is always this type of nostalgia for home. Some people are able to transform that nostalgia into action and actually return home. This is why Fina is able to return to Freetown and Sierra Leone in general so that she can contribute.

The JRB: You are a member of the African Literature Association. What is it, what does it do and does it benefit the African writer and reader in any way?

Pede Hollist: Oh absolutely. It’s the premier professional and scholarly organisation for all those who are interested in African literature. Because it was founded in the United States, its annual meetings tend to be in the US, moving from city to city based on which universities and communities are willing to host the conference. It benefits not just African scholars in the diaspora but in fact, I suggest, although I don’t have hard evidence to corroborate it, that perhaps fifty per cent of attendees come from outside the United States. So African scholars in various African universities—particularly South Africa, Nigeria and Kenya—attend the conference. I think because it tends to deal with literary fiction, its concerns do not always, for a lack of a better phrase, trickle down to what I would describe as the ‘lay’ African reader. Because of the difficulties in logistics associated with publishing scholarly work and getting it distributed to African universities, let alone African libraries and bookstores, the material and work done there does not always get to the ordinary African reader. Consequently, it tends to appear like an elitist organisation. But it has internationally respected journals in which scholars debate issues related to African literature and very often those who are not part of the organisation react to these, partly to challenge the status quo. I think that it is in that very reaction that we get stimulating conversations and debates which move African letters forward.

The JRB: You are currently back in Sierra Leone from the US. Are you back on the continent to stay?

Pede Hollist: Not quite, although it’s in the pipeline. I was fortunate to be a recipient of the Fulbright grant. This gave me the opportunity to teach at the University of Sierra Leone, which is what I have been doing since September 2017. I have taught at Fourah Bay College, which is a constituent college of the University of Sierra Leone, as well as the Institute of Public Administration and Management, also known as IPAM. There I was able to work with Mrs Miriam Conteh-Morgan, and we trained students to start a writing centre, which would be the first of its kind in Sierra Leone. In addition to that, I have been doing a lot of outreach, working with community groups and schools in materially poor communities, teaching students basic grammar as well as introducing them to creative writing. It’s a wonderful experience both for me and, I hope, for the students and other individuals that I encounter.

The JRB: Besides you and Aminatta Forna, what other Sierra Leonean writers do we need to be reading?

Pede Hollist: My listing of names is not a suggestion of rank. I’ve worked extensively with Yema Lucilda Hunter; I have worked on her novels in the life of my own professional career. She is a writer and biographer that I think people should know about. She has written four novels and through them has chronicled Sierra Leone’s history. Someone with greater notoriety than even Yema Lucilda Hunter is Ishmael Beah, who wrote A Long Way Gone, the memoir of a child soldier. His second book, a novel, Radiance of Tomorrow, received some critical acclaim.

Among the Sierra Leone-based writers, the poet Gbanabom Hallowell is someone worth exploring. One of his poems has just been adopted by the West African Examinations Council. That should give an example of the calibre of the work that he is doing. He has written several volumes of poetry as well as plays and I think he has written a novel. In addition we have Oumar Farouk Sesay, whose Landscape of Memories came out about about a year ago.

The JRB: What is your impression of the Sierra Leonean literary scene since you’ve been back home? What are the trends that you have noticed?

Pede Hollist: It’s actually quite a vibrant scene, but very sort of localised. It’s not the kind of scene to compare with what I’ve garnered from my few days in Kenya, in the sense of organising activities like Artistic Encounters. Nonetheless, writers have formed virtual as well as real communities. Clearly what they are trying to do is develop organisations where they will be among like-minded people, but also use these organisations to help each other hone and develop their craft.

Sierra Leone is in the throes of recovering from its devastating civil war and the Ebola epidemic, so the tendency has been for government and international organisations to focus on social, political and developmental institutions, to the neglect of culture. So these artistic communities are working against a tide that is moving in a direction that I don’t think is beneficial to them. That said, I’ve attended drama competitions organised for secondary schools and I know that there are cultural exhibitions that occur frequently at the national stadium. I am aware that a literary festival is in the planning stages for this year. There are facilities for art exhibitions. Most recently I attended a poetry slam at the University of Sierra Leone organised by a group of young Sierra Leoneans in an organisation known as the Reading Club. So there are a variety of efforts being made to place reading, writing, creative imagining at the forefront, but my sense is that these organisations are working against a much bigger swell of the tide, which focuses on Science Technology Education Mathematics (STEM)—and we know now that we are supposed to put the ‘A’ back to create some STEAM.

The JRB: I have to ask about the Sierra Leonean Writers Series. What is it?

The JRB: Lastly, the shortlist for the Caine Prize was recently announced, and I can’t let you go without asking you about it, because you were previously shortlisted yourself. This year we have three Nigerians, one South African and one Kenyan; so we have Kenya, Nigeria and South Africa—‘The Unholy Trinity’. What are your thoughts?

Pede Hollist: First off, let me congratulate those people who have been nominated. It’s a great achievement and somebody is going to come away with the prize and possibly a great future in writing. But you are right, Nigeria, South Africa and Kenya continue to dominate the Caine Prize shortlist. I think there is good reason for that. The tradition of creative writing in literature has existed longer in these three countries than perhaps any of the other countries in Africa, and I think that you are seeing the benefits of that. You have a tradition with writing workshops, with well-established writers like Chinua Achebe, Ngũgĩ wa Thiong’o and Nadine Gordimer. You have models that young writers either want to imitate, model themselves on or perhaps agitate against, so therefore you get the kind of writing which ultimately bubbles to the top. On the stranglehold that these three countries happen to have on the Caine Prize, I think that is at the back of the mind of somebody like Osman Sankoh in establishing the Sierra Leonean Writers Series, and others like myself who are trying to do things like conducting workshops in Sierra Leone. That said, a small country like ours has had one winner and I believe three shortlisted writers—we shall try to add to that in 2019.