Luanda’s Shrödinger’s Woman: Efemia Chela travels to Angola with José Eduardo Agualusa’s A General Theory of Oblivion, which was shortlisted for the 2016 Man Booker International Prize, and which won the 2017 International Dublin Literary Award, the ‘world’s richest literary prize’, in The JRB’s Temporary Sojourner series.

‘Our intuition says that no observer can be in a mixture of states—yet the cat, it seems from the thought experiment, can be such a mixture. Is the cat required to be an observer, or does its existence in a single well-defined classical state require another external observer?’ 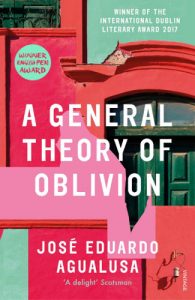 A General Theory of Oblivion is immersed in the world, yet outside of it. Through multiple characters, and José Eduardo Agualusa’s witty descriptions of their follies and gains during the Angolan War of Independence and its aftermath, comes a complex novel about personal and political independence, with an experimental feel.

The main character, Ludovica, is based on a real woman of the same name. Agualusa had access to her writings and diaries, though makes it very clear that despite this: ‘What you will read is, however, fiction. Pure fiction.’—a statement that seems fair, considering many literary cultures don’t have the clear divide between fiction and non-fiction that English literature does. The Ludovica he creates is a shy, bookish woman of a nervous disposition who lives with her sister Odete in Portugal and rarely leaves the house:

She thought of the two of them as Siamese twins, joined at the navel. Her, paralysed, almost dead, and the other, Odete, forced to drag her along wherever she went.

The two sisters end up in Luanda quite suddenly, when Odete marries Orlando, a rich Angolan mining engineer. He sets them up on the top floor of a classy building known to invoke envy in everyone who sees it, and at first the three are happy in their slightly unconventional domestic situation. But it turns out they are in the wrong place at the wrong time, as demonstrations, talk of expelling the whites and clamouring for communism become more frequent. Their neighbours begin to leave, giving them anything they can’t take with them. War is on its way, but not before one last party. One evening Odete and Orlando go to a friend’s farewell and Ludovica never sees them again. Fearful, entirely alone for the first time in her life, surrounded by violence she can hear through the windows, she begins to make an independent existence the night the Angolan War begins.

The way Ludovica barricades herself in her sister’s home mimics the way much of the knowledge about the Angolan War has been buried. She’s like a human landmine, unseen and completely silent. Eating long-gone neighbours’ food, burning pieces of furniture for warmth, writing on the walls, listening to the radio, losing her mind, reading books from the gigantic library, feeding her dog Phantom, she creates an imitation of life, undertaken in a void. The more isolated Ludovica is from the world, the more poetic and introspective she becomes:

The Portuguese woman would listen to Brel as the sea swallowed up the light. The city asleep and her struggling to remember names … And the night, bit by bit, time stretching out aimlessly. Body weary, and night turning from blue to blue. Tiredness pressing on her kidneys. Seeing herself as a queen, believing that someone, someplace, could be waiting for her just as anyone awaits a queen. But there was no one, not anywhere in the world, waiting for her.

One of the pleasures of reading of the novel is not knowing whether Ludovica will explode or lay dormant forever.

Outside of Ludovica’s sequestered space, thirty tumultuous years pass. Agualusa entertains us with a kind of absurdism and what he calls ‘the subtle architecture of chance’:

In the hotels of Luanda, businessmen from Portugal, Brazil, South Africa and Israel all rubbed shoulders, in search of quick money in a country going through a process of frantic reconstruction.

Socialism unexpectedly morphs into capitalism and no one can agree whether the country is better or worse off. Bands of street children spend their days looting unguarded buildings and their nights wondering who their fathers are. A journalist called Daniel Benchimol collects and rates stories of mysterious disappearances while working at a newspaper. An escaped prisoner on the run, Little Chief, decides to hide in plain sight as a beggar and one day finds a pigeon with diamonds hidden in its stomach. As Ludovica’s building begins to fill up again, all the seemingly disparate experiences of the survivors of years of war begin to cross in a strange and ultimately satisfying fashion.

But Agualusa makes us question the nature of change and freedom. What happens when ‘change’ looks the same as the old status quo? Are people who have freedom actually free? As Madalena, a badass, gun-toting rebel nurse who gets people out of tight spots, says:

You and your friends fill your mouths with big words—Social Justice, Freedom, Revolution—and meanwhile people waste away, they fall ill, many of them die.

A General Theory of Oblivion reminds us that if we do not change with the world, it will change without us.