Read an excerpt from Marcus Low’s debut novel Asylum—an existential thriller set in a quarantine facility in the arid Karoo—which was recently shortlisted for the 2018 9mobile Prize for Literature (formerly the Etisalat Prize). 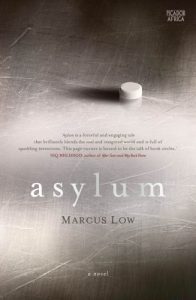 Two days later Von Hansmeyer said I could return to my ward. That was the thing with nodules: out of the blue they almost killed you and then just as suddenly the threat was over. It took a few weeks for your lungs to deal with all the scarring, but if you survived the first night, you’d be okay.

I spent most of the following days in bed. I slept more than I had in years. Whatever meds they had me on put me out like a horse. Twice every day a nurse would tap his foot while I trudged up and down the corridor to exercise my lungs. It was slow going.

One afternoon, from my bed in my ward, I heard shouting. A door slammed. Something clattered to the ground. I was too tired to get up to look, but later that day Jonathan hurried up to the room to tell me that the gangs had had a bust-up.

‘Something happened in the showers,’ he said, strangely excited by it all. ‘There is a lot of blood.’ He didn’t know more. I didn’t really care much either. I was feeling too rotten. I didn’t give it another thought.

Then, late one afternoon, probably a week or so into my recovery, as I was slowly making my way back from my daily exercise routine up and down the corridor, I saw Kagiso and Sibu heading in the direction of the stairs. They looked like they meant business. I think it was something about the narrow-eyed, determined expression on Kagiso’s face that made me stop and then follow them at a distance. I noticed his hand on a long narrow object in his pocket and remembered that he had a knife. I heard Kagiso say, ‘I’m going to pulp the fucking kwere’s head.’ I remembered the afternoon of the distant shouting and the blood in the bathroom.

My legs felt weak. I had to lean against the wall as I walked. My head pounded a rhythm that made me feel faint on each beat. The hospital swivelled around me. I thought of just letting them be, but remembering Jonathan’s story of the blood in the showers, I pushed on after them. Like everyone else, I was starved of excitement.

From the landing, I saw through the large window that lit up the stairs that they were already out in the back yard. They loped over to where Espoir and his gang of African refugees were sitting with their legs stretched out on the concrete, their backs against the wall of the laundry room. I knew that that wall would be baked hot from the day’s sun, offering a certain comforting warmth that time of evening. If I hadn’t been feeling so awful I might have gone down myself.

Espoir didn’t get up when Kagiso came to a standstill in front of them. As he sat there, his long limbs shiny, perfectly shaped, he looked so bored and disinterested that I wondered whether he was stoned or in some sun-induced delirium.

Kagiso said something, but Espoir simply ignored him. Then Kagiso started shouting and waving his arms about at the jaded man on the ground. It looked as if he was about to kick him, but Sibu held him back. A crowd of patients gathered around as if they had been waiting for this confrontation for years. They started a slow clap.

Kagiso turned and spoke, addressing the bystanders as much as the men on the ground. He made a sweeping gesture with his arms. He looked up at the empty sky. Then, suddenly, he spun around. He bent down toward Espoir and hissed something, saliva spraying as he did so.

From where I was standing it all seemed to happen in silent-movie slow motion. No sound breached the window. All I could hear was the distant clatter of plates being washed in the kitchen. It sounded like any other afternoon in the hospital.

As I reached up to open the upper window a crack to let the outside in, Espoir’s arm shot out. In one fluid motion, he reached out and managed to grab Kagiso by the ear, yanking him head first down into the concrete. The bystanders roared and whistled. The impact couldn’t have been very hard though, because a moment later Kagiso was back up, trying to knee Espoir in the face. He connected with his chest instead, and Espoir staggered sideways. He struggled to get up on his feet, and before he could find his balance, Kagiso launched himself at the Senegalese man. They both dropped to the ground like lame horses.

A blur of rummaging limbs, legs kicking wildly, fists flying, arms flailing about. Two heaving, grunting beasts wrestling on the hard concrete, their sweaty bodies thrashing around in the fine red dust, hands seeking a grip. Then a smear of crimson on the grey concrete. A head slammed down into the ground, a chilling crack met with a sudden stunned silence. Dead silence. No cheer from the onlookers. No clapping.

As I stood there, watching from the relative quiet of the landing, it all looked wrong. I had seen a fight or two in my life, and this wasn’t one. Then, as Kagiso let go of Espoir’s neck and it slumped to the concrete, I caught a momentary glimpse of Kagiso’s face, not enraged, but dead and sickly looking. These were not men fighting, but corpses.

I looked away. A deep nausea welled up in my throat. What the fuck had we come to? If I hadn’t been sick just a few minutes ago, I might have been then.

Quite suddenly, it was all over. The brawl had lasted only a matter of seconds. Now, except for two heaving chests, the tangle of limbs and torsos lay unmoving. Their mingling blood pooling a reddish brown. After a while, Kagiso struggled up slowly and started dusting himself off amidst a heavy fit of coughing. On the ground, Espoir lay curled up, convulsing, coughing lumps of bloody gunk. On the ground near his feet a bright object, maybe a knife, flashed in the failing light.

The bystanders stood, not knowing where to look. Some turned and slumped away. From the door below I saw the clean white of a nurse’s uniform running out to Espoir. He was still coughing blood. Kagiso and Sibu were nowhere to be seen. The nurse turned back and shouted urgently for help, and soon afterwards a second nurse and then Von Hansmeyer went rushing out, the doctor’s balding head gleaming in the late afternoon.

I turned around and trudged back up to my ward. I shouldn’t have followed them.

Later that evening an ambulance came for Espoir. We never saw him again. The story was that he had been badly cut and had to be treated at the big state hospital in Port Elizabeth. Maybe he got better and just wasn’t sent back to us, maybe he bled to death; no one knows.

Kagiso stayed in emergency a full three days, not for the knife wound in his side, but to stabilise his airways. The problem wasn’t any injury, but that the bug had been reawakened inside him and was taking its revenge on his lungs and oesophagus.

That was the last fight I saw. There were more—of course there were—but something changed. We had lost the capacity for such things, stopped seeking them out, chasing after them, cheering from the sidelines, not because our minds were purified, but because our bodies were sick. We just weren’t men any more, not in the way we used to be. Some people were in denial about this, of course, but most people knew.

Sarah would have laughed had she heard me saying that. She would have said that’s nonsense and that being a man has nothing to do with fighting. But she would have been wrong.

And even if she’d seen that sad struggle out in the yard, I’m not sure she would have been able to grasp what it meant. Every patient who saw it knew exactly what it meant. It knocked the bottom out of your capacity to want anything, if that hadn’t been knocked out a long time ago.